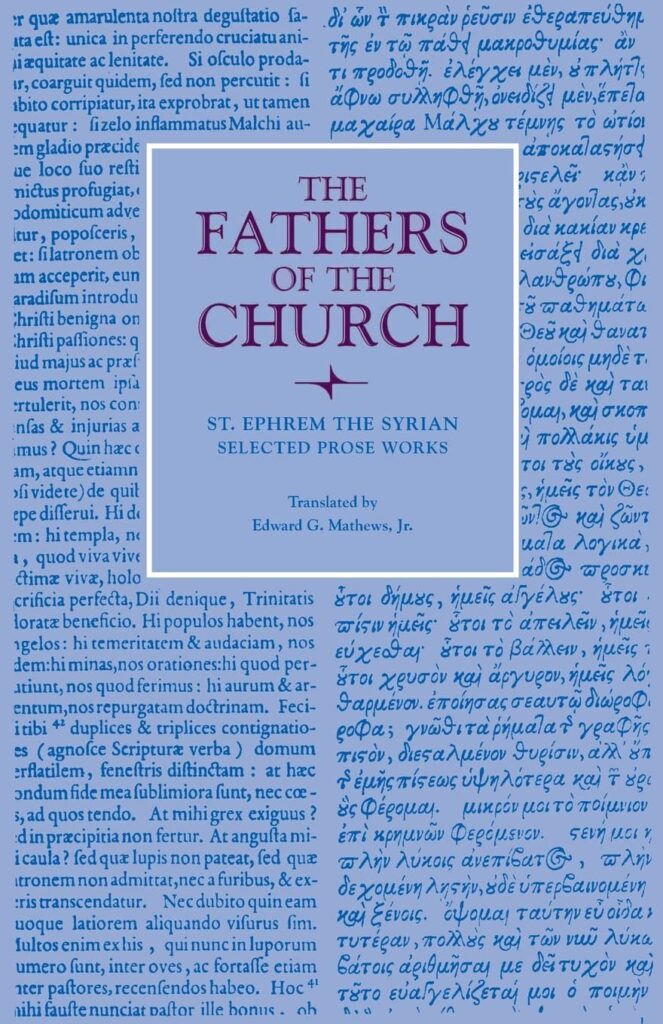 This volume presents for the first time in the Fathers of the Church series the work of an early Christian writer who did not write in either Greek or Latin. It offers new English translations of selected prose works by St. Ephrem the Syrian (c. A.D. 309-373). The volume contains St. Ephrem’s Commentary on Genesis, Commentary on Exodus, Homily on Our Lord, and Letter to Publius. The translators have enhanced the volume with a general introduction, extensive bibliography, and specific introductions to each of the works. Together these features provide an overview of the major scholarship on St. Ephrem and Syriac Christianity.

St. Ephrem, the “Harp of the Spirit,” composed prose commentaries and sermons of skillfull charmand grace, in addition to beautiful hymns, during the time he spent teaching at his native Nisibis and at Edessa in Syria. In the two commentaries presented here, Ephrem focuses only on portions of the sacred text that had a particular theological significance for him, or whose orthodox interpretation needed to be reasserted in the face of contemporary heterodox ideas. He does not provide a continuous, verse by verse exposition. The elaborate rhetorical figures and stylistic devices of the Homily on Our Lord and Letter to Publius succeed in creating language and imagery nearly as striking as Ephrem’s poetry.

St. Ephrem marshaled his considerable theological and rhetorical talent to challenge the appeal that the doctrines of the Arians, Manicheans, Marcionites, and the followers of Bardaisan might have had to the minds and hearts of Syrian Christians. In the face of their rational systems, his was the voice that insisted on the incomprehensibility of the divine nature.

St. Ephrem’s commentary on Genesis emphasizes that God is the only self-subsistent being and the creator of everything else, and that to take any other position is to make God the “arranger”, and not the “creator”.

Sun and Moon, Bless the Lord: Understanding Our Part of the Hymn of Creation

Sabbatical Journal 3: The Coronavirus Crisis Deepens – What Do I Do If Mass Is Not Celebrated?