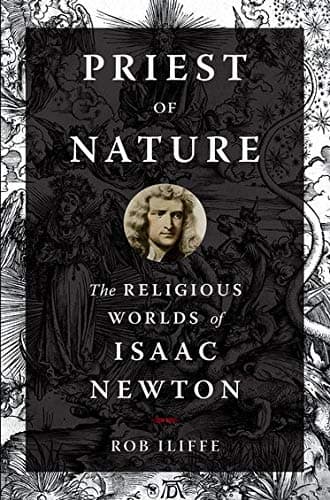 It is often said that Isaac Newton, arguably the most prominent scientist in human history, wrote more about the Bible and religion than about science and math.  However, his religious writings were generally unpublished, and have always been relatively inaccessible and little studied.  Robert Iliffe, the author of the 2017 book Priest of Nature: The Religious Worlds of Isaac Newton, tells us that this is due to a number of reasons: in part due to Newton’s own views on publishing; in part due to the anti-Trinitarian nature of Newton’s own Christian faith; in part due to how Enlightenment-era thinkers who were perplexed by these writings explained them away as something Newton produced only later in life, when he had gone senile or even mad; in part due to modern scholars rejecting them as bizarre, irrelevant to his more significant work, and unbecoming of his genius.  However, in the 21st century these writings have all become widely available—indeed, available in digital form, through the internet.  Iliffe, an Oxford University Professor of History who directed the “Newton Project” that was responsible for making Newton’s religious writings so available, introduces his readers to Newton’s work and to his thought.  Newton was anti-Trinitarian, anti-Catholic, and had a poor opinion of St. Athanasius (to put it mildly).  He believed that much had been known to the Ancients, including scientific knowledge comparable to his own work such as the Principia—knowledge that the Ancients had received from the time of Noah but that was later corrupted and lost.  He studied the book of Revelation assiduously.  He sought to live a godly, almost monastic life (but he was also anti-monk).  Iliffe shows Newton’s faith being central to all his work, throughout his life, whether that work was in physics, mathematics, or religion.

From Iliffe’s closing paragraphs of Priest of Nature:

Newton’s use of his intellect, and the moral and religious values he attributed to it, were central to his life and work.  Like the imagination and the will, the understanding had been forged in the image of God, and one had a duty to use it….

The claims that the Principia had revealed the language and blueprint of the divine creation, and that (in Halley’s famous words) no mortal could approach the gods more closely, should not be read as mere hyperbole.  If Newton’s achievements said a great deal about the human intellect, so they said much about the mind of God.  God had the capacity to calculate and effect all the infinite motions and their causes that constituted the universe from one moment to the next, but armed with the Principia, humans created in the Image of God had the equipment to do something similar….

The will was most free the where the understanding was most perfect, and so its sincere and painstaking cultivation was the highest Christian duty….  Newton’s hymn to the will reached its zenith in his early text “De Gravitatione” and, in particular, in the General Scholium, where the intelligent designs of God were held to be the result of his supreme will.

Ultimately, Newton’s early life (to say nothing of his last three decades) was suffused with an overriding religious purpose.  Convinced that he had been created in the Image of God, his scholarly life was in part an exercise in examining how he measured up to his maker.  As such, it focused both on perfecting himself and on understanding the works of God.  Accordingly, he strove to make his life that of a godly man, avoiding the temptations of the imagination and its chief effects, idolatry, idleness, and lust.  He condemned the imaginary products of human artifice and instead nurtured his understanding so that he could dedicate himself to studying the divine truths of Scripture and Nature.  The relentless cultivation of his own intellect was the precondition for gaining a mature wisdom, along with a purified will that could make the correct choice between good and evil, and between true and false religion.  It was also this heroic intellectual labor that produced the monumental works in theology, natural philosophy, and mathematics that survive today.

After Sir Isaac Newton revealed his discovery that white light was compounded of more basic colored rays, he was hailed as a genius and became an instant international celebrity. An interdisciplinary enthusiast and intellectual giant in a number of disciplines, Newton published revolutionary, field-defining works that reached across the scientific spectrum, including the Principia Mathematica and Opticks. His renown opened doors for him throughout his career, ushering him into prestigious positions at Cambridge, the Royal Mint, and the Royal Society. And yet, alongside his public success, Newton harbored religious beliefs that set him at odds with law and society, and, if revealed, threatened not just his livelihood but his life.

Religion and faith dominated much of Newton’s life and work. His papers, never made available to the public, were filled with biblical speculation and timelines along with passages that excoriated the early Church fathers. Indeed, his radical theological leanings rendered him a heretic, according to the doctrines of the Anglican Church. Newton believed that the central concept of the Trinity was a diabolical fraud and loathed the idolatry, cruelty, and persecution that had come to define religion in his time. Instead, he proposed a “simple Christianity”—a faith that would center on a few core beliefs and celebrate diversity in religious thinking and practice. An utterly original but obsessively private religious thinker, Newton composed several of the most daring works of any writer of the early modern period, works which he and his inheritors suppressed and which have been largely inaccessible for centuries.

In Priest of Nature, historian Rob Iliffe introduces readers to Newton the religious animal, deepening our understanding of the relationship between faith and science at a formative moment in history and thought. Previous scholars and biographers have generally underestimated the range and complexity of Newton’s religious writings, but Iliffe shows how wide-ranging his observations and interests were, spanning the entirety of Christian history from Creation to the Apocalypse. Iliffe’s book allows readers to fully engage in the theological discussion that dominated Newton’s age. A vibrant biography of one of history’s towering scientific figures, Priest of Nature is the definitive work on the spiritual views of the man who fundamentally changed how we look at the universe.

The religion of the young Isaac Newton

Isaac Newton, the Godly Man – Will he engage my students?

From the V.O. Faith and Science Pages: Priest of Nature – The Religious Worlds of Isaac Newton

Other Worlds, Other Civilizations?