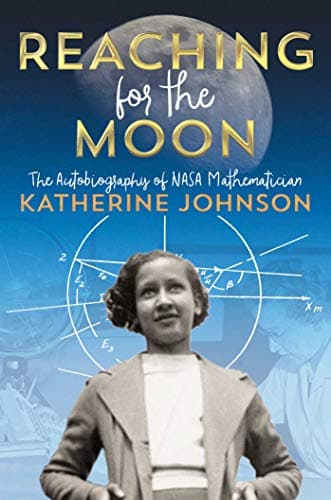 Reaching for the Moon was written by Katherine Johnson and published in 2019 (by Simon & Schuster: Athenium Books for Young Readers), when she was one over hundred years old.  Johnson was one of the NASA “computers” featured in the best-selling book Hidden Figures: The Untold True Story of Four African-American Women who Helped Launch Our Nation Into Space and the popular movie Hidden Figures.  The book discusses Johnson’s work at NASA, but its primary focus is on her family, her Christian faith, and how those came together to help her and other African-Americans succeed during a time when they lived under both legal segregation and a constant threat of violence.

As a young girl, Katherine Johnson showed an exceptional aptitude for math. In school she quickly skipped ahead several grades and was soon studying complex equations with the support of a professor who saw great promise in her. But ability and opportunity did not always go hand in hand. As an African American and a girl growing up in an era of brutal racism and sexism, Katherine faced daily challenges. Still, she lived her life with her father’s words in mind: “You are no better than anyone else, and nobody else is better than you.”

In the early 1950s, Katherine was thrilled to join the organization that would become NASA. She worked on many of NASA’s biggest projects including the Apollo 11 mission that landed the first men on the moon.

Katherine Johnson’s story was made famous in the bestselling book and Oscar-nominated film Hidden Figures. Now in Reaching for the Moon she tells her own story for the first time, in a lively autobiography that will inspire young readers everywhere.

The book contains certain factual errors, such as a reference to the Apollo 11 command module being in orbit around Earth rather than the moon, for example.  Johnson herself notes near the end of the book that by the time she was in her late nineties she had memory lapses such as forgetting her Social Security number, so these minor deviations from fact should not be seen as errors so much as imperfect memories of a person whose memory covers an exceptionally long period of time.