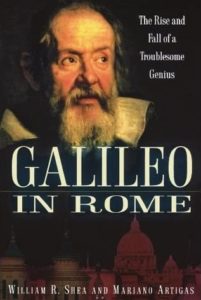 This 2004 book by William Shea and Mariano Artigas, published by Oxford University Press, discusses Galileo in the framework of the six trips he took to Rome in his lifetime.  His first was as a young man, during which he discussed mathematics with Christopher Clavius.  His last was as an old man, when he was summoned before the Inquisition.  A focus of the book is his relationship with Maffeo Barbarini, who became Pope Urban VIII, and how Barbarini’s support for Galileo turned to opposition and anger.

The book offers a fascinating account of the six trips Galileo made to Rome, from his first visit at age 23, to his final fateful journey to face the Inquisition. The authors reveal how Galileo’s fate may have been fixed by his own impudence, including creating a “fool” character in his Dialogue to voice the anti-heliocentric arguments of the Roman church. The authors show that throughout his trial, until the final sentence and abjuration, the Church treated Galileo with great deference, and once he was declared guilty commuted his sentence to house arrest.

Here then is a unique look at the life of Galileo as well as a strikingly different view of an event that has come to epitomize the Church’s supposed antagonism toward science.