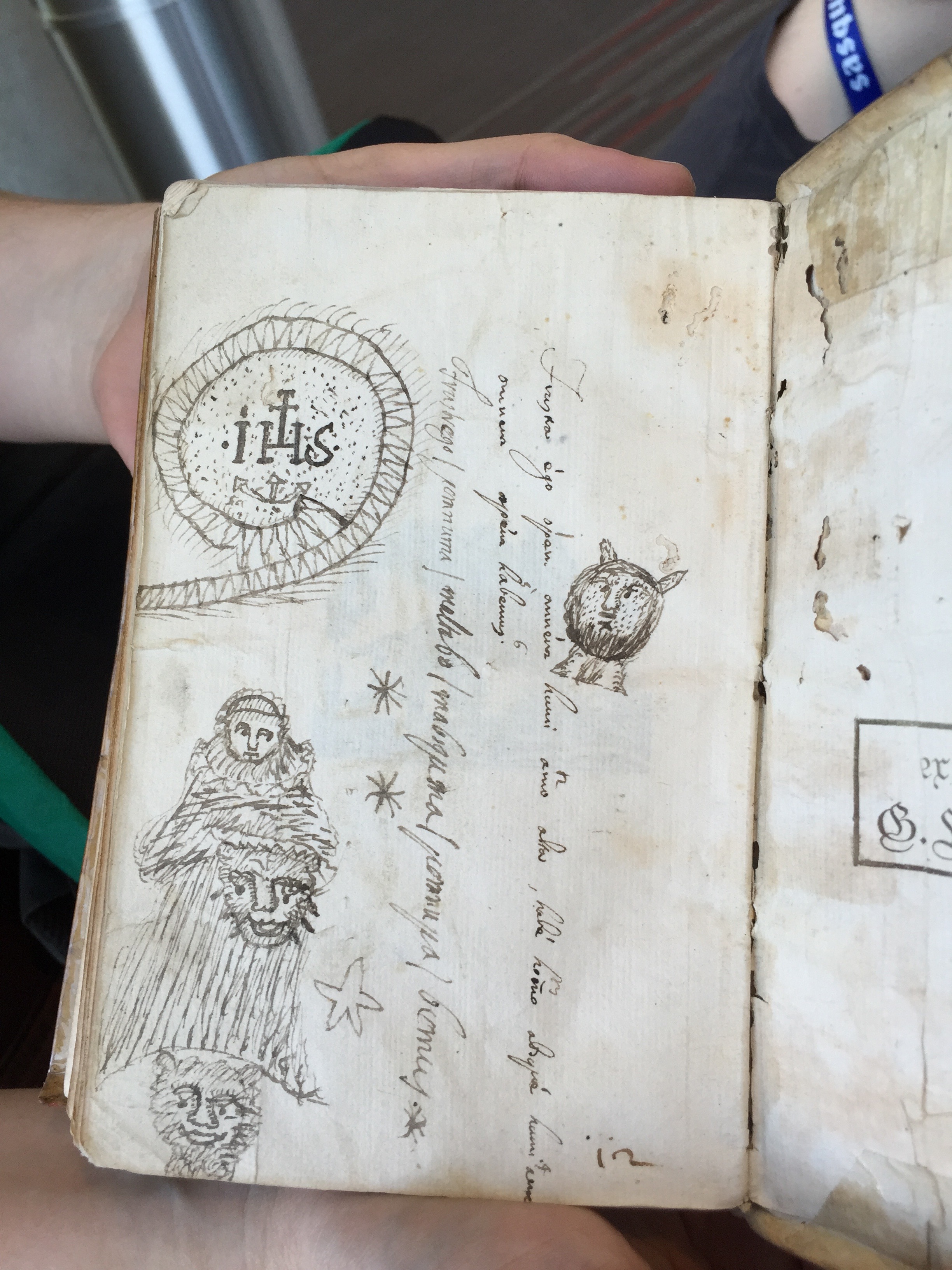 Ada Palmer, a historian at the U of Chicago (and fantasy author) gave a talk on medieval books, and then showed me this end-flap doodle by a bored student in the 16th century

I’ve recently returned from this year’s World Science Fiction Convention, held this year in San Jose, California. This version of the  column, published in the Tablet in September of 2004, was first published here at The Catholic Astronomer in 2015. It describes my reaction following the 2004 Worldcon, held the first weekend of September in Boston.

Stories, myths, and tales make ideas a part of popular culture. Jesus taught with parables; fables and fairy tales are the way we teach children about life. Even the ancient Greek myths, it’s been argued, might have been deliberate devices for organizing and transmitting information about the natural world to nonscientific people. Once an idea gets turned into a story, people pay attention long enough to listen. And they’ll remember it. The images from Dante are far more vivid than the arguments of Aquinas.

All fiction makes assumptions about science and religion. A good mystery, for instance, can depend on the physical possibility of certain events and the ethics of the characters involved. Fantasy and science fiction is special, however, in that these assumptions are often overt, central to the story – and not necessarily what we assume in our everyday lives.

Larry Lebofsky, who teaches astronomy at the University of Arizona, suggested on one panel that the best stories for teaching science are in fact the ones where the science is visibly out of date. Why? Because they show that scientific ideas do change with time – a particularly challenging concept to students who equate science with memorizing facts for an exam.

More subtly, by contemplating something that is patently not true, we are made more aware of the way things actually are.

Science isn’t the only subject that can be taught this way. Religion plays a lot of roles in our own popular culture, roles that are mirrored in fantasy and science fiction stories postulating other possible worlds. It’s the activity that deals with Ultimate Questions, it’s the arbiter of right and wrong, it’s the conscience of society. And priests are the people who officiate over the important moments of our life: birth, marriage, death.

But the best SF stories that deal with religion are the ones that are centered on what religion is really about: not ultimate questions, or ethical behavior, or marriages and funerals. But God.

Not surprisingly, some of the most prominent fantasy and science fiction authors today write from a viewpoint based on their own religious faiths. These included some of the most highly honored writers in the field, like Connie Willis (Episcopalian) and Gene Wolfe (Catholic).

Orson Scott Card, an active Mormon with a theology degree from Notre Dame, is another. Some of his stories deal with religion in its many roles; some are taken from his Mormon tradition. One of my favorites gets right to the heart of things.

It’s called The Memory of Earth. We’re on a world called Harmony, twenty million years in the future. It was settled by refugees fleeing a war-ravaged Earth, who have engineered themselves and their descendants to respond to a computer in an orbiting satellite called the Oversoul; a computer that lets them remember how to make medicines and refrigerators, and allows them commit to small crimes but which keeps them from building planes, guns, or other instruments of war. Without being able to remember war, it’s hoped, a peaceful society would eventually grow. Well, it hasn’t worked out quite that way, and after twenty million years even computers wear out eventually…

The Oversoul is a machine, not God. Everyone knows that. (But it talks to our hero in ways that sound an awful lot like prayer.) It’s a little bit less than God.

So, what would it be like to live in a universe where God were only a human invention, a little bit less than He really is? It’s not what Orson Scott Card believes to be essentially true. It’s a speculation based on an extrapolation of a philosophical possibility. But by contemplating it, we learn to appreciate more what the real God is all about. 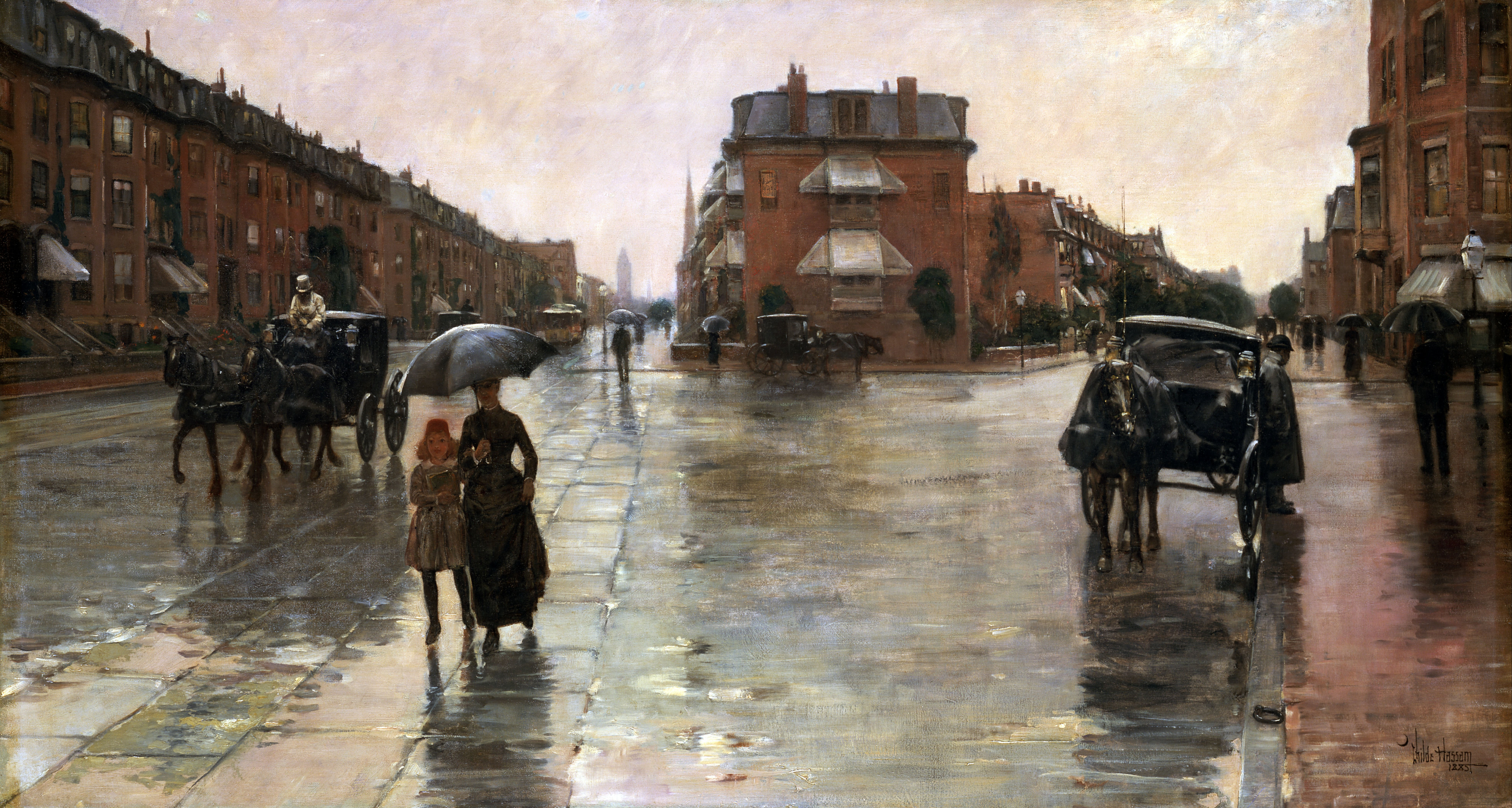 Rainy Day Boston by Childe Hassam, 1885. The apartment on the second floor of the building at the far right is where I  lived in 1985. Image via wikimedia

Leaving the Convention hall, I spent an afternoon wandering through my old neighborhood in Boston’s South End. Walking down the street in the late afternoon, the 19th-century row houses highlighted by the late afternoon fall sunlight, I recalled a painting by the American impressionist. Childe Hassam, “Rainy Day Boston.” Depicting the very street where I once lived, the artist had included in the distance a famous colonial-era church. I looked up the street; there was the church. I’d never noticed it before. The artist had trained me to appreciate my surroundings with new eyes.

That’s what good fantasy, good science fiction, ultimately does. Put me on another planet, and I see that I’m already on a planet, Planet Earth, that really is situated somewhere in outer space. Move me to another time, and I see my own time in a new light, as just one now in an inevitable progression of nows. Place me in a fantasy where good must overcome incredible odds to defeat evil, and suddenly the Evening News makes a lot more sense.

By contrast, best sellers and modern highbrow literature describe people and places I do not recognize. It’s science fiction and fantasy that show me the real universe.