This column first ran in The Tablet in December 2010.

We returned to Australia in early December [2010], once more trying to find a clear night or two when we could map the southern sky. After being clouded out in August see an earlier Tablet column here, nine days straight, we’d gone home without seeing the promised stars. Now we were waiting again, as the weather in Sevenhill stormed around us. 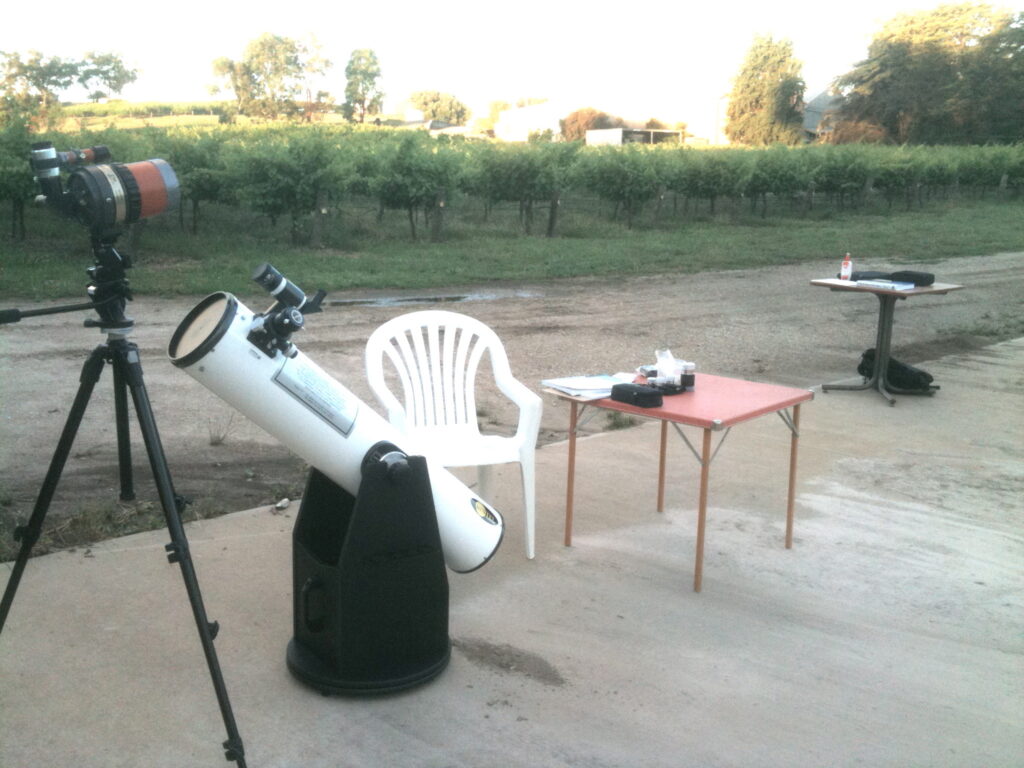 We set up our telescopes by a vineyard in Sevenhill. The little orange C-90 is the telescope I took to Africa in 1984. The white Dobsonian was donated to the Jesuits by Mike Smith of Bintel telescopes in Sydney

Wednesday was the first night we could set up our telescopes without getting rained on. The evening started out promising, but an hour after sunset the clouds rolled in once again. It was just like our experience in August. 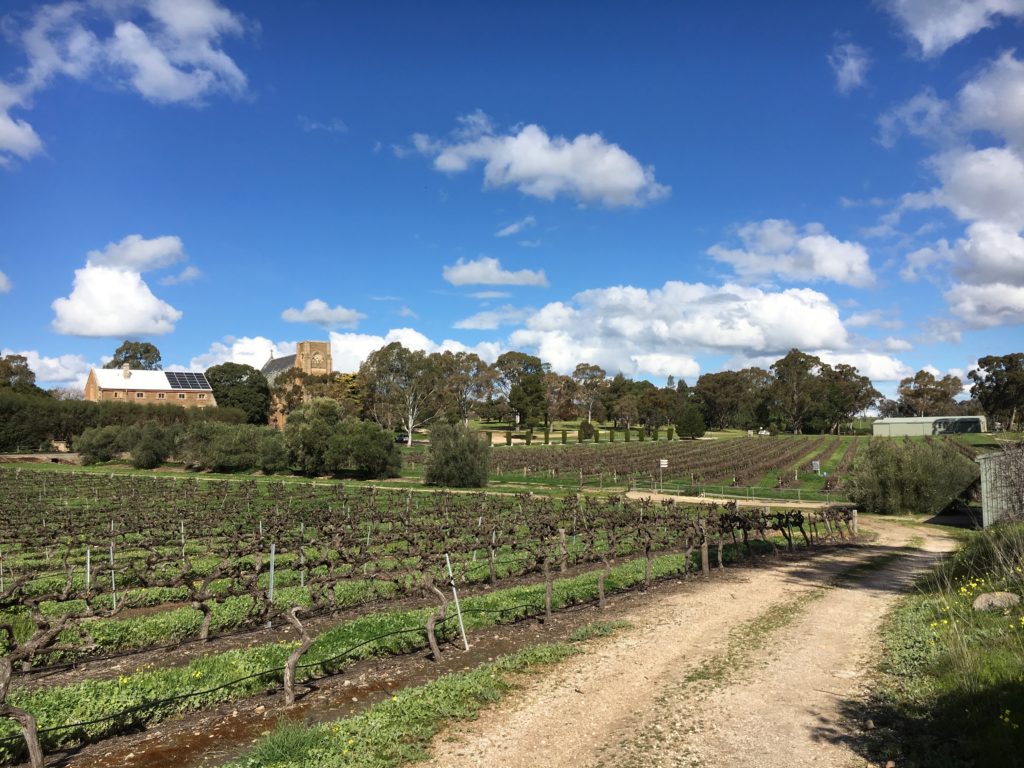 The clouds were playing games with us…

But this time, with warmer weather than in August, we stayed outdoors and waited. Christmas carols warbled through the small speakers of my cell phone. My colleague sipped his cup of tea. Through cracks in the clouds, slivers of starlight peeped through, tantalizing us with a promise of what lay just out of our reach. Sucker holes, we called them. Just enough to sucker you into thinking the sky was clearing.

I wondered… what would it be like to live in a planet where the sky never cleared, where all we could see of the universe outside our own mundane world were momentary glimpses of stars? Would you be able to map out each sliver and piece them together into a coherent picture? How long would it take before you realized that not only the clouds, but the stars themselves, are moving – rising and setting and slowly moving east to west?

At times a whole segment of the sky would open up, and we’d rush to uncover our telescopes; but before we could even focus the eyepiece there would come the return of the clouds, and our cynicism. Suckers. The folks back home in their comfy chairs, reading books, watching television, heading off to warm beds, would surely be laughing at us for thinking there would ever be stars to see.

After two long trips, and twelve fruitless nights, I was getting desperate.

Would it help if I invented my own pagan religion, and pretend to have mystical powers that could part the clouds if I chanted arcane runes in the dark? Perhaps building a golden calf might help. Was God punishing me for some unknown sin I had committed? Or, alternately, was I being a fool to think that God took any interest in my own puny and unimportant desire to write a little book about the southern skies? Or was my cynicism itself a sign of a lack of faith that God was punishing me for?

But I did have faith; or at least, hope. That’s what had sustained me when, for the second time, I bought a plane ticket from Rome and spent 24 hours flying here. That’s what kept me sitting outdoors in the cold and dark.

By two a.m. it was obvious that the skies would never clear, that my trip to Australia was a fool’s errand, that God wasn’t listening to my whining prayer. But we did not budge.

It was something of a surprise when the sucker hole at 2:30 am didn’t go away, and by 3 am the hole of stars had expanded to fill the entire sky.

Oddly enough, my reaction wasn’t the amazement, or the joy, or even the relief that I had anticipated. Nor did I gasp at the beauty of the star-filled expanse. Instead, I felt mere matter-of-fact acceptance. Of course the stars had always been there behind clouds. Of course it’s clear now. That’s the way it’s supposed to be. That’s the way it always was. Time to get to work.

Sometimes we get so wrapped up with the endless anxiety of waiting of Advent that we forget to celebrate – or even recognize – Christmas when it finally arrives. 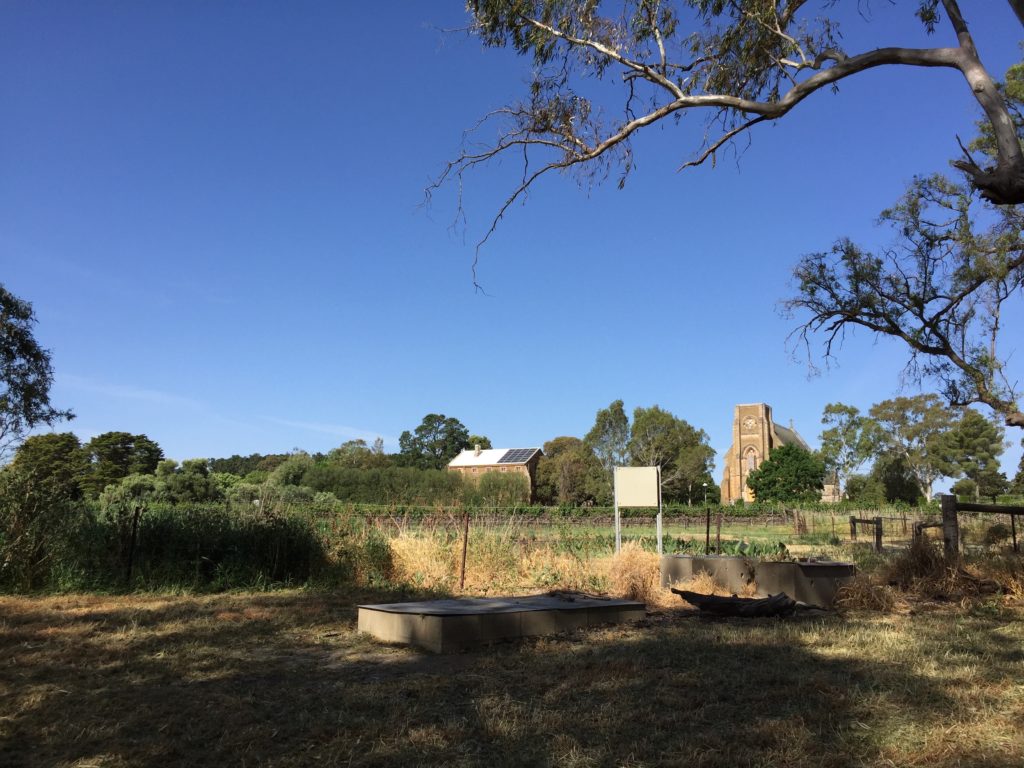 Clear skies eventually came our way. Compare this view with the cloudy one of my earlier post…