The Dawn spacecraft has engaged its ion engine, and has begun a long slow spiral down to its Survey Orbit at 4,400 km (2,730 mi). The spacecraft will achieve this orbital distance sometime in mid-to-late June. At this distance, the resolution of images taken by the spacecraft will be 72 times greater than those taken of Ceres by the Hubble Space Telescope.

The “Mysterious Bright Spots” on Ceres have now resolved into a group of multiple spots. My guess is that as Dawn gets closer, more spots will come become visible. In his article on Space.com, Phil Plait mentions how dark Ceres is, and how reflective the spots are. He also mentions that we still don’t know what they are yet. I’m finding this time of mystery and discovery highly exhilarating. 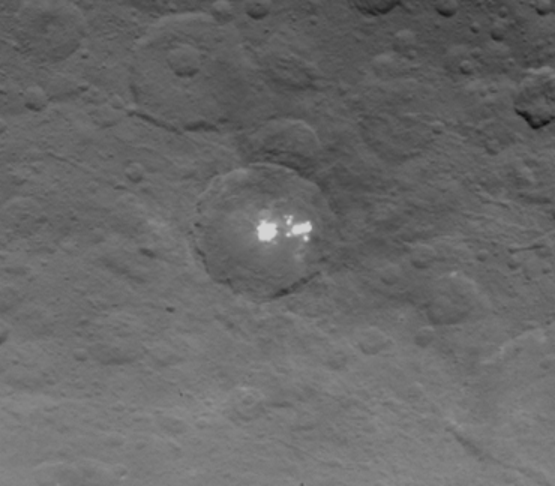 If the spots are impact craters, it raises a host of other questions: How old are they? How deep are they? How long does it take for space weathering to darken down the surface? Are any of the other lighter-shaded regions examples of older craters that have darkened? Could the smaller spots be large chunks of ice, laying on the surface, after an impact? If the spots are ices, a spectral analysis of them should prove fascinating.

Dawn will remain in the Survey Orbit until mid-July, when it again engage it engines and spiral down to an altitude of 1,450 km (900 mi).