I really enjoyed taking part in Cruinniu na nOg last year. The preparation, the fun, the smiles,and the work produced. This year because of COVID 19 the events that can be held  online are online.  I have found myself unprepared for it and will miss out this time. However, I am working on some online ideas and hope that these efforts will be useful in the future.  Here is what happened in two of the venues during that festival in  2019. 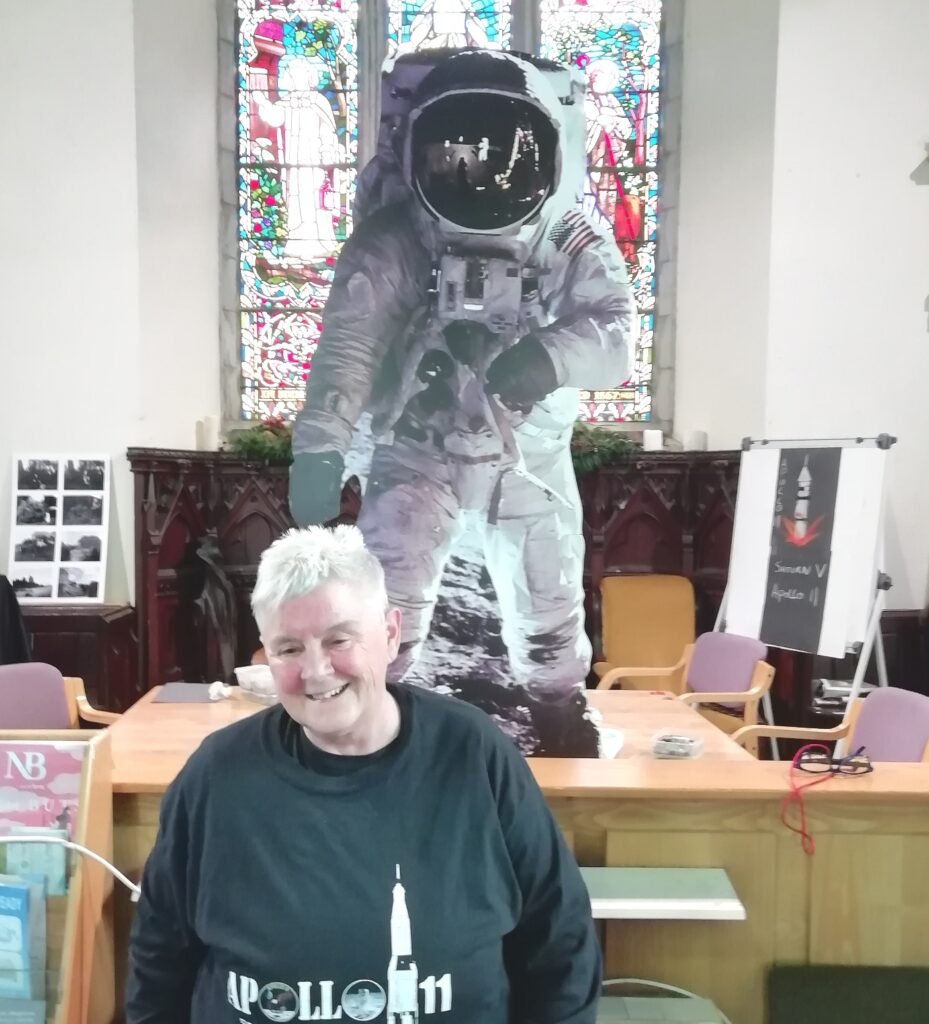 A cardboard Buzz Aldrin looking great infront of a massive stained glass window in Ballinrobe Library. With the real Deirdre

Cruinniu na nOg  means the meeting of the young in the Irish language. Creative activities are funded on that special day by the local authorities all over the country.

The overarching body is  called Creative Ireland. Ireland as a country therefore  backs creativity nationwide for all her children.

My drawing workshop Let’s Go To The Moon – Apollo 11 became part of this government initiative to stimulate creativity. Cruinniu na nOg is aimed to encourage children to get involved in new experiences while creating and also having fun.

The  first venue on June 15th, was  Castlebar library Co Mayo.  A really good presentation space with enthusiastic staff to help set up. An  audience of  young children along with a few parents showed total interested in the Apollo 11 mission.  Some of the children were very well versed in Apollo mission details. It is so refreshing to listen to children talking about the first landing on the moon 50 years later.  After my presentation, which is the basic story of Apollo 11, we got down to the drawing.

” Through the Creative Ireland Programme, Ireland is now among the first countries in the world to prioritise creativity as vital to our personal and collective wellbeing and success. The Programme promotes understanding and appreciation of the value of creativity in all of its forms; it engages and influences decision-makers to embed creativity across public policy, and it supports and enables participation in creative activities.” from the  2018 report of Creative Ireland

On  this occasion the challenge was to draw Buzz Adrian’s helmet with Neil Armstrong reflected in the visor. One of the few images with both astronauts in the shot because Neil Armstrong was the cameraman.  Their little faces told the story of the challenge. I could see the look of  ” she can’t be serious” and ” this is too hard for me” in their eyes.

In order to bring out their creativity and tutor them a little, I did a demonstration drawing.  This lesson in observation helped the children break down the complex image into shapes they could recognise. Curves, rectangles, human stick figures, dark shapes, and light shapes.  Using this method, encouraged the children to draw in an informed way at their own level. Therefore creating  an easier pathway  to their drawing than their earlier facial expressions exclaimed.

The results are excellent attempts using pastel on black paper. Their pride in themselves  duly served they brought their work  home.  Every child left the library with  NASA moon cards, ESO ( European Southern Observatory) stickers and an Apollo 11 information sheet designed by me. Here it is if you want to use it yourself. Moon Workshop Sheet A4

After that, I drove on to Ballinrobe Library to repeat the workshop. What a total surprise, Ballinrobe Library is in an old church. The building has excellent acoustics, which I toughly enjoyed.  My cardboard Buzz Aldrin figure cut a real presence in the church.  No doubt the real Buzz would have been impressed by his figure being present at this unique location. As in Castlebar, the cardboard Buzz helped me explain the astronaut’s A7L suit and how it helped the men survive on the moon in 1969.

For this workshop the drawing challenge was the Saturn V rocket. Another demonstration drawing helped break down the rocket into a simpler way to look at it.  Basic shapes, cones, cylinders, and rectangles. We also added energy. The children were encouraged to express the power needed to launch the Saturn V from the Earth to the moon.  In the room was enough energy to launch a small rocket from Mayo. As the presentation went on I could see some adults in the library soaking it in and coming toward the drawing area. As with Castlebar the children attending were very proud of their drawings. Also, every child went home with NASA moon cards, ESO stickers and an Apollo 11 information sheet. 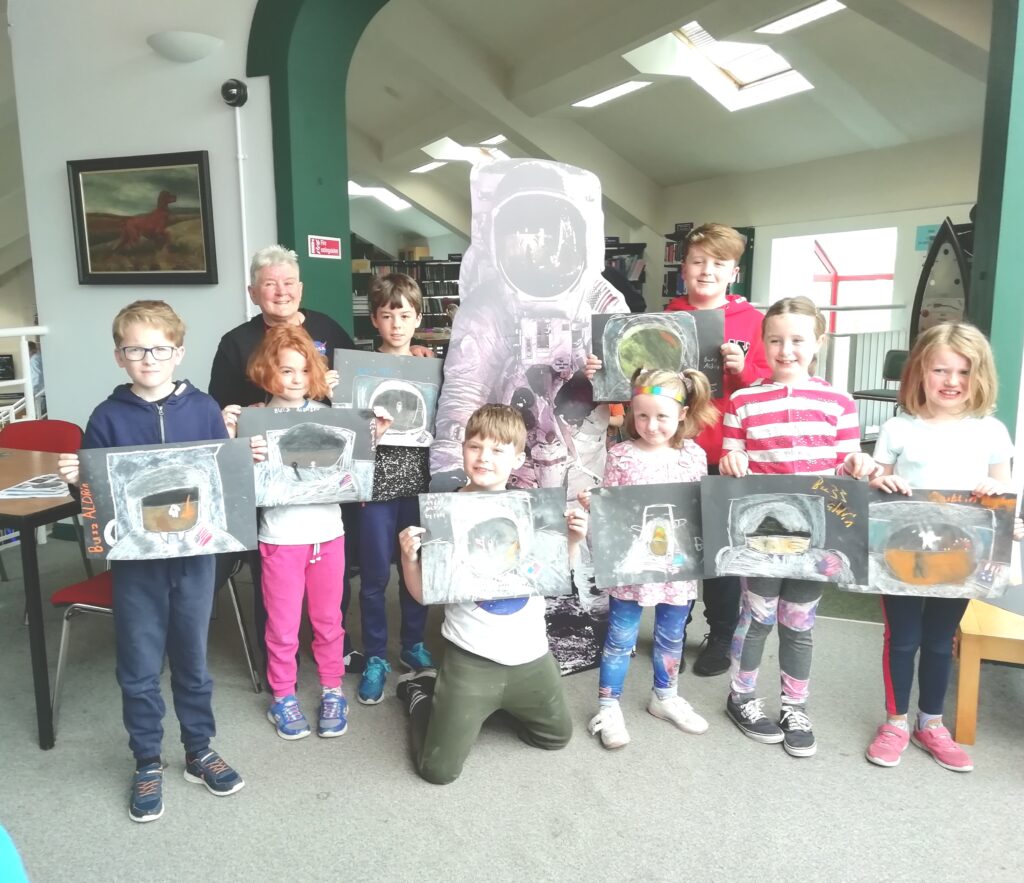 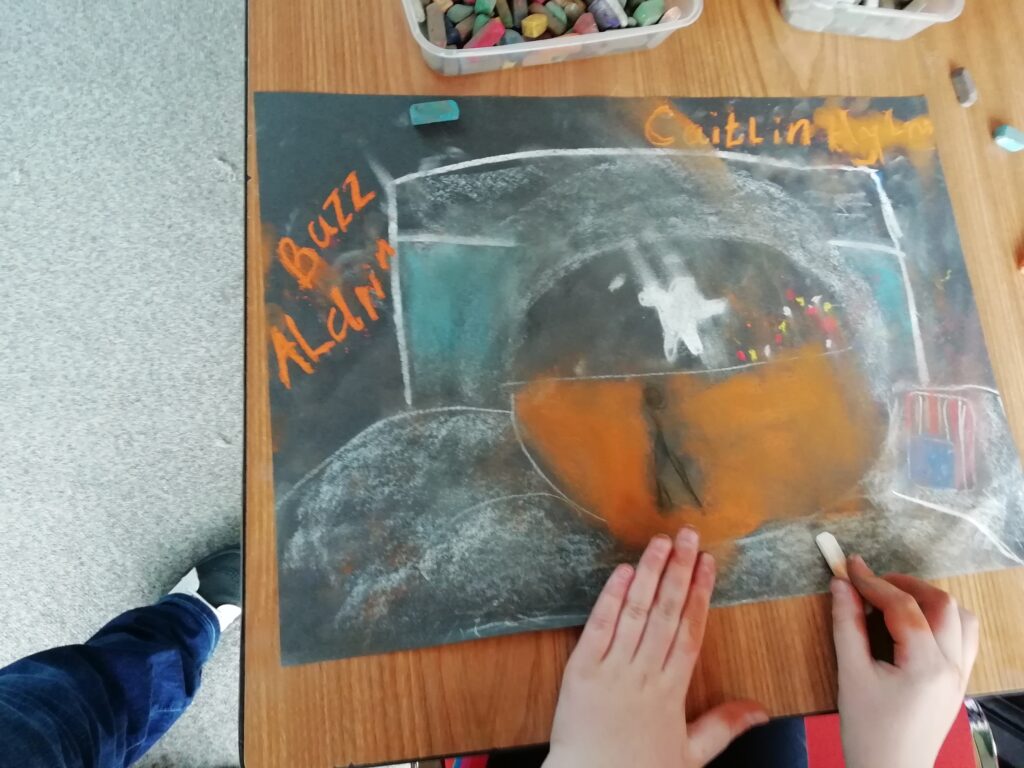 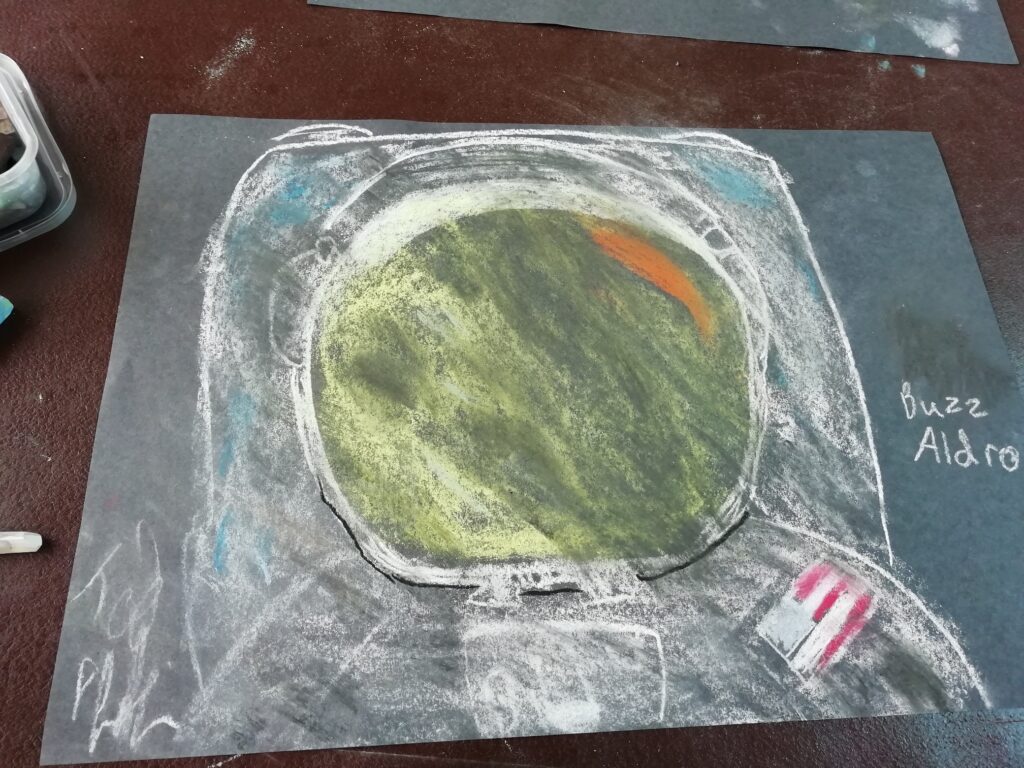 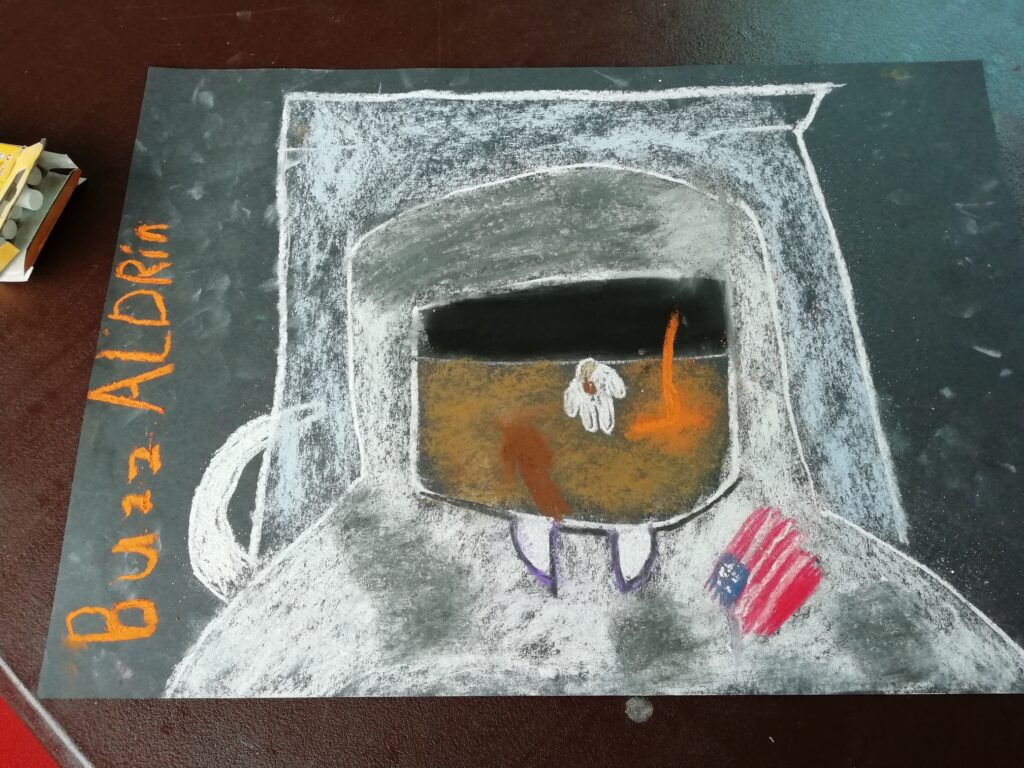 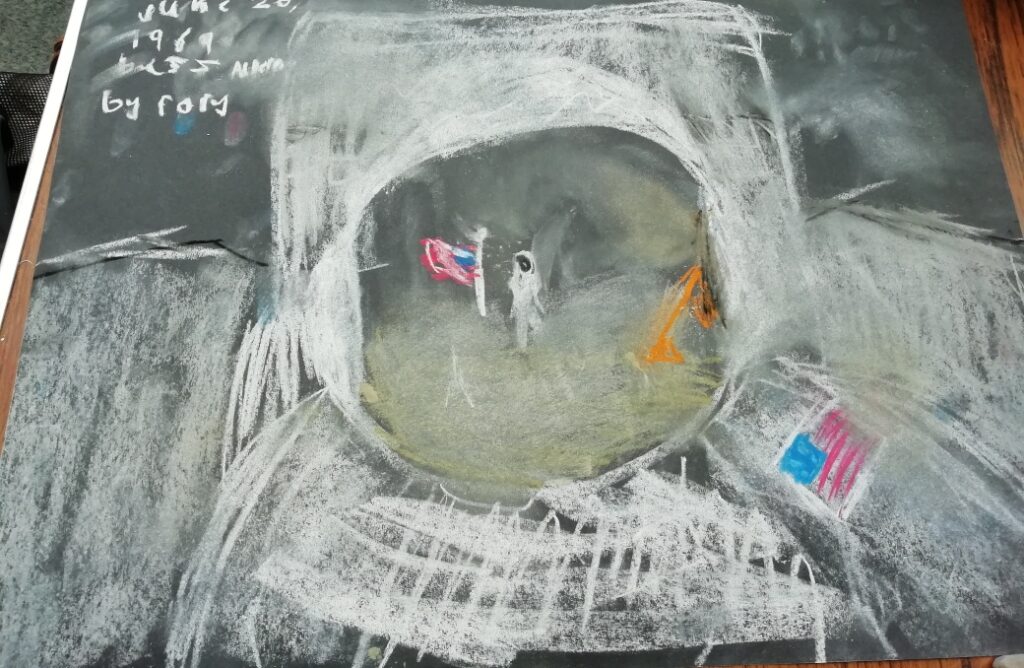 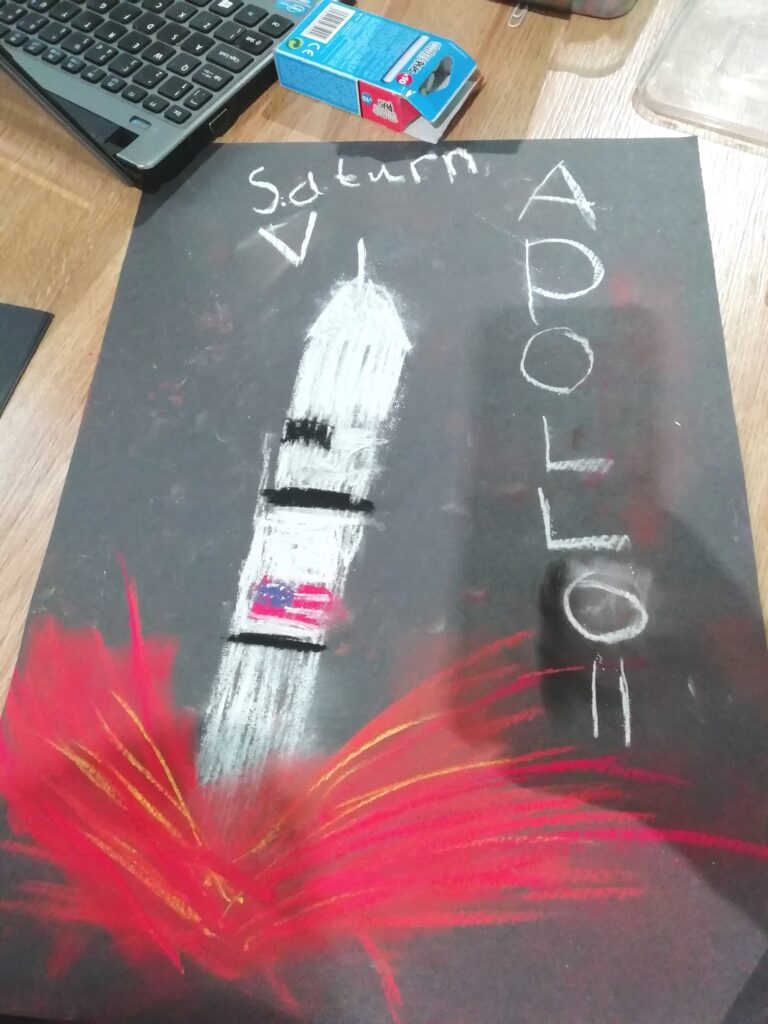 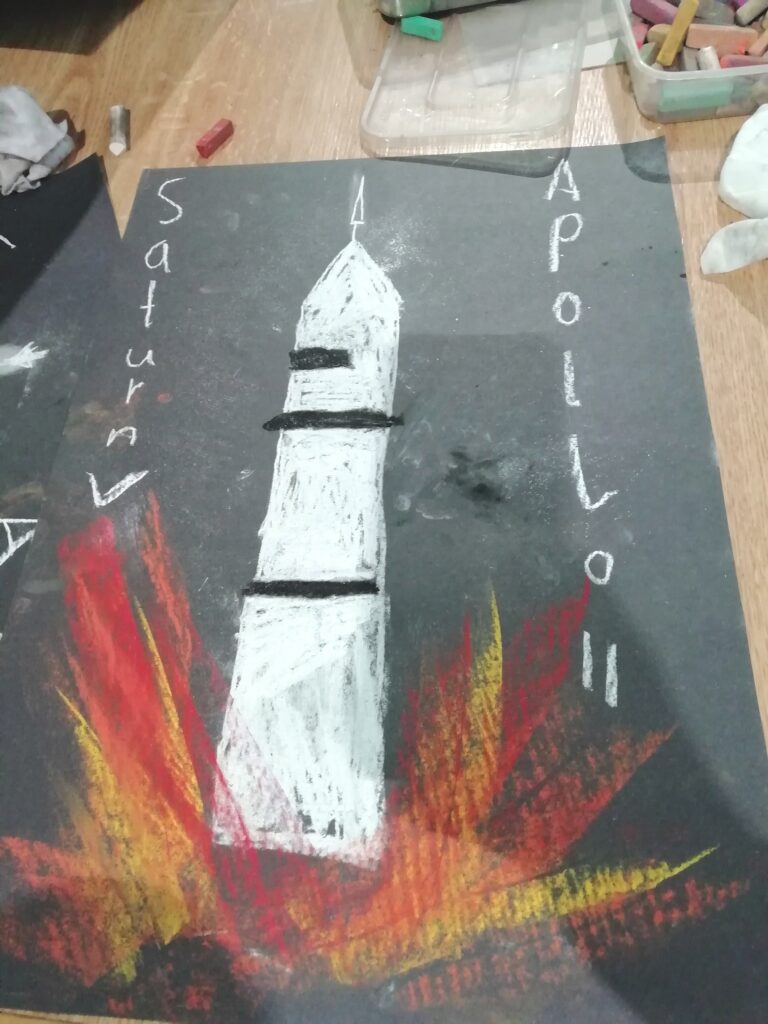 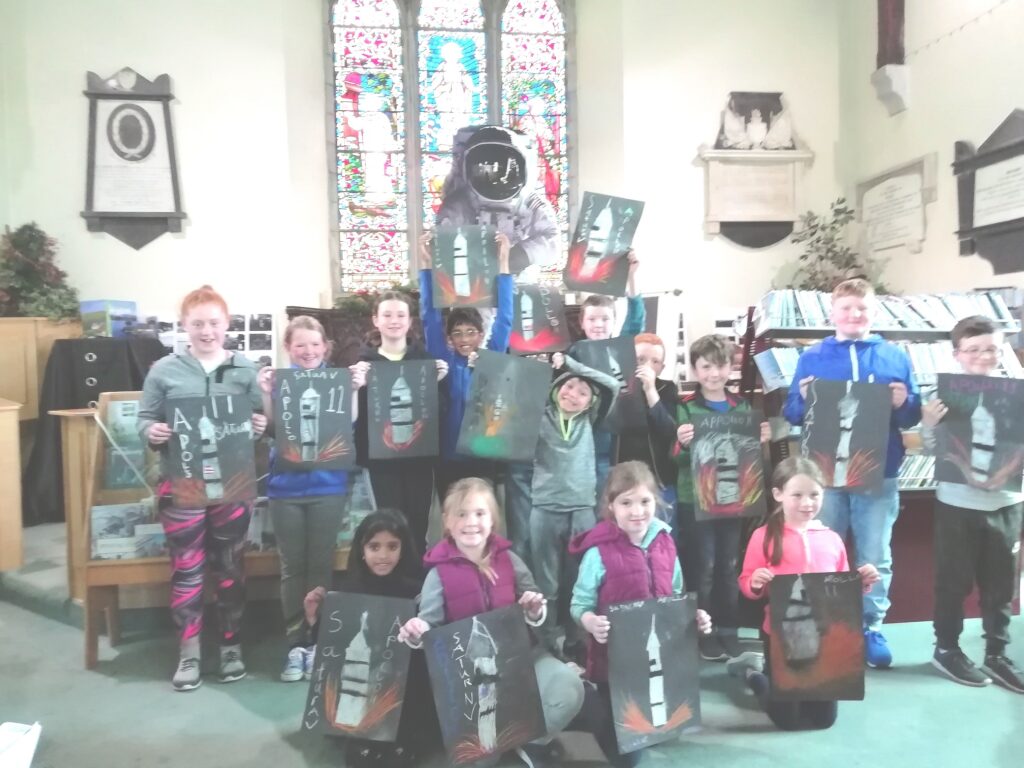 Wonderful drawings of the Saturn V rocket at Ballinrobe Library 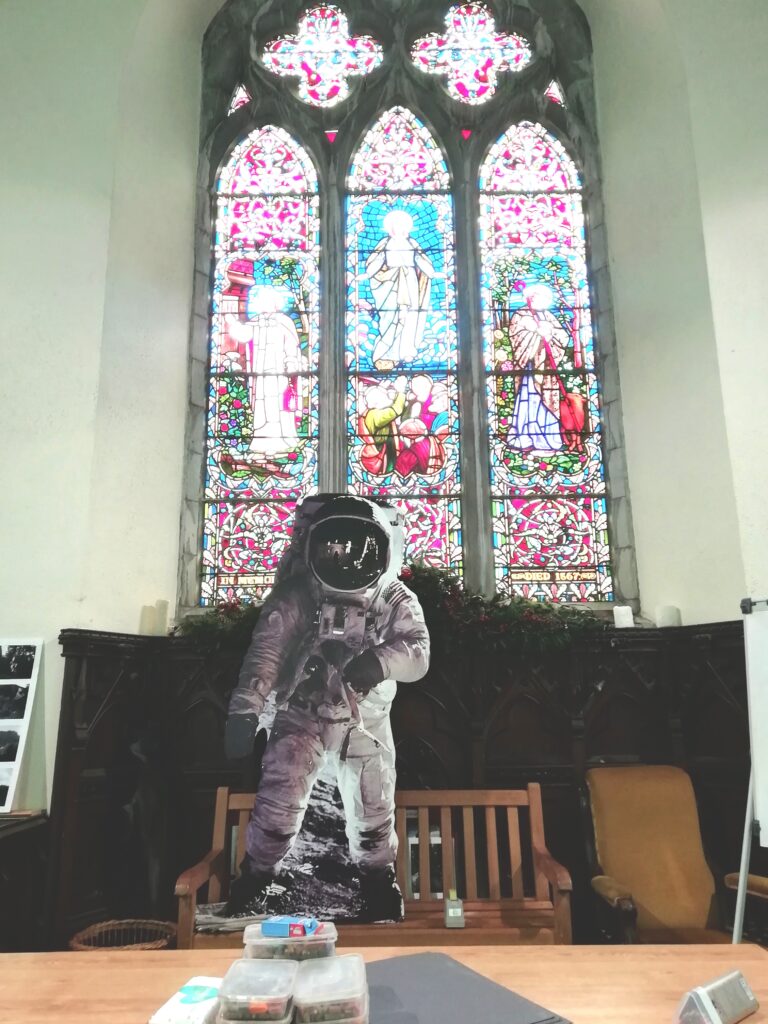 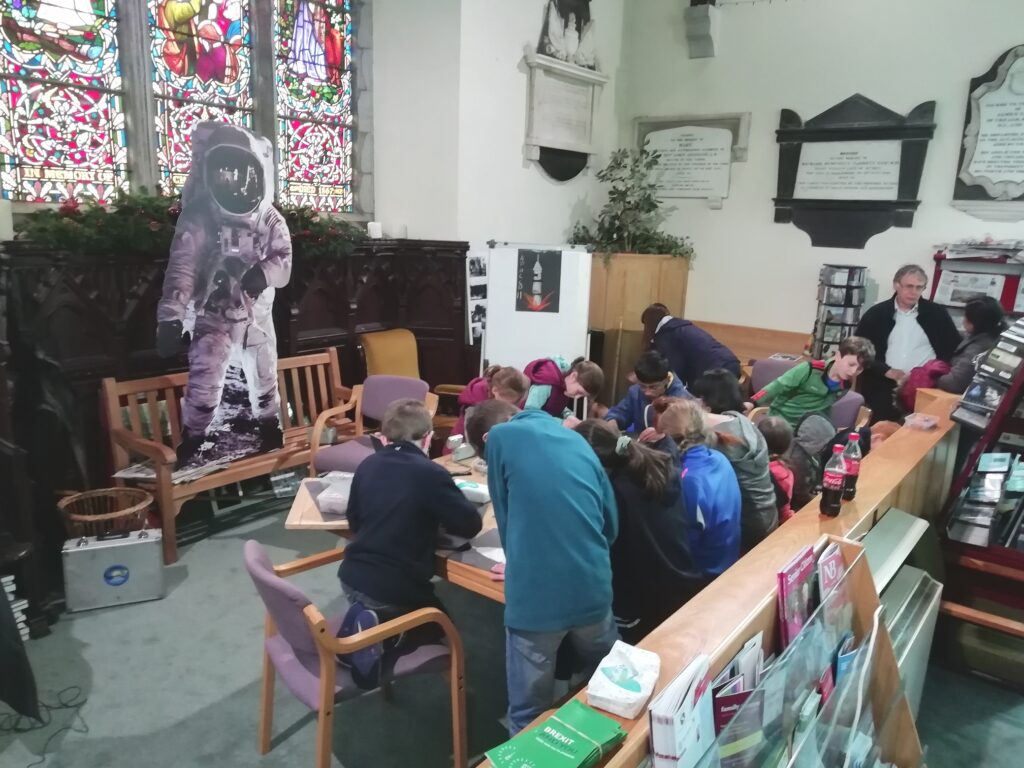