Recently, a fellow member of the Warren Astronomical Society was giving a lecture about stars to a church group (the WAS does quite a bit of outreach at churches and similar venues). When he mentioned the words “Stellar Evolution,” some audience members got VERY upset, and he was literally forced to quit his lecture, pack-up and leave.

I have since modified my lecture about stars to use the words “Stellar Life-Cycle” instead.

When did the word “Evolution,” used in any form, become a “Bad Word?”

Everything evolves,
Everything.
All the time…
Galaxies, stars and star systems, planets, life, ecosystems, intelligence, cities, cultures, societies, technology, data, thought… the whole of the Cosmos.

Evolution is NOT a “Bad Word” – it’s about as bad as the word “Mauve.”

My wife is a middle-school Science teacher; every time she covers geologic time scales and evolution, one (or more) of her students challenges her with either the Young Earth belief, or that the “the Bible says that the Earth was created in seven days.” She counters with: “How long is one of God’s ‘days?’ A day on Jupiter is only 10 hours, the length of Mercury’s ‘day’ is longer than its year – what if one of God’s ‘days’ is an eon?” 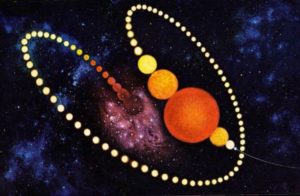 I was doing some solar observing outreach at a park near my home, and after describing various features on the Sun, a fellow asked me “Do you believe in Evolution?”

I answered: “Depends on what you mean: our Sun changes over great spans of time – it evolves. This city was not always here – the landscape and the city itself evolved. If you mean LIFE – Yes, absolutely, 100% YES. I accept that Evolution is the process by which you and I have come to be here talking with each other.”

4  |  Encore: On Seeing the Great Wall of China from the Moon

6  |  Encore: “And Do Not Return There till They Have Watered the Earth:” Wondering about Hebrews & Hydrology