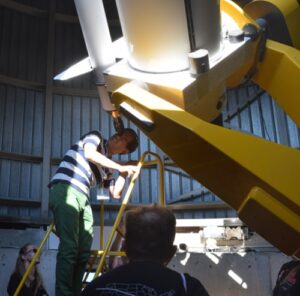 Observing the sun at the Adler Planetarium’s observatory.  All photos by Matt Dowd.

Roughly sixty students and scholars from around the globe convened in Indiana this past July for the University of Notre Dame Thirteenth Biennial History of Astronomy Workshop, or NDXIII.  NDXIII took place July 5-6 at Notre Dame, July 7 at the Adler Planetarium in Chicago, and July 8-9 again at Notre Dame.  The theme of NDXIII was “Models and Mechanisms.”  Presentations spanned cultures and ages.

A significant portion of NDXIII treated work from the age of ancient Greece, specifically the Antikythera Mechanism.  Dr. Michael Edmunds, emeritus professor at Cardiff University, where he was head of the School of Physics and Astronomy, gave two presentations on this subject: one for a general audience, and one for the more scholarly audience attending NDXIII.  Dr. Edmunds is chair of the Antikythera Mechanism Research Project, chair of the Astronomical Heritage Committee of the Royal Astronomical Society, and a former member of two UK Research Councils.

Dr. Edmunds not only captivated both his general and scholarly audiences at Notre Dame with his discussions of the Antikythera Mechanism, but at the Adler he delighted scholar, student, and layperson alike by portraying Isaac Newton in a short one-man play, “Sir Isaac Remembers….”  In this play, an aging “Sir Isaac” regaled his audience with tales of his life and the lives of certain acquaintances.  These tales were variously full of reminiscing, grousing, and gloating, with the amount of each depending on the particulars of the tale. 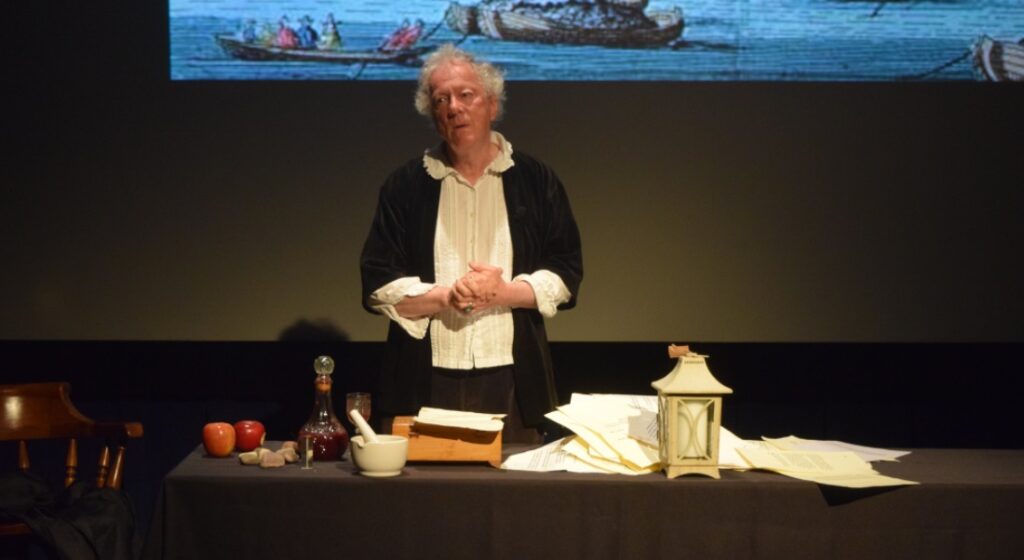 The day at the Adler also included several hours of free time (a trip to the Adler has been a regular feature of these Notre Dame workshops for many years).  This allowed those attending NDXIII to learn more about the Adler’s substantial collection of resources and artifacts related to the history of astronomy, or to take in a planetarium show, or to explore the Adler’s many exhibits that treat the history of astronomy and of space exploration.  On the other hand, an NDXIII attendee could opt to simply walk along the shore of Lake Michigan: the weather was good; those who chose this option were treated to beautiful views of the Lake and of the Chicago skyline.

The Chicago skyline as seen from the Adler Planetarium (right), and the Adler’s statue of Copernicus (left).

Those attending NDXIII were also treated to other excellent scholarly presentations.  A complete list of titles and abstracts is available online (click here for the listing).  Presenters hailed from several countries each in Europe and in both of the Americas.  Most of these presentations were followed by substantial rounds of questions and discussion, because both those chairing the presentations and the presenters themselves stuck to the allotted times.  The Biennial History of Astronomy Workshops always feature busy days—between presentations, food, opportunities for socialization, and other activities (including some observing through the telescope at the University of Notre Dame’s observatory), attendees are kept busy from morning to well after the sun sets.  Thus students and scholars leaving NDXIII on the afternoon of July 9 went away having been exposed to several days of both many solid new ideas and much collegiality.

Conference attendees at the University of Notre Dame (left) and at the Adler Planetarium (right).

Planning has begun for the University of Notre Dame Fourteenth Biennial History of Astronomy Workshop, or NDXIV, taking place in the summer of 2019.  Whether you are student or scholar (and readers of The Catholic Astronomer are certainly one or the other!), mark it on your calendar.