To address that question, let’s consider this: what would an expanding universe look like?

This is going to take some imagination. Let us imagine a universe. The diagram below will be our universe. It contains galaxies (the little colored ovals), but its size and shape is undefined. The galaxies extend out beyond what is seen below, but how much beyond we do not know. Furthermore, the galaxies may extend out farther to the right than to the left, or farther down than up. All we really know is that here is our universe, and it contains galaxies. 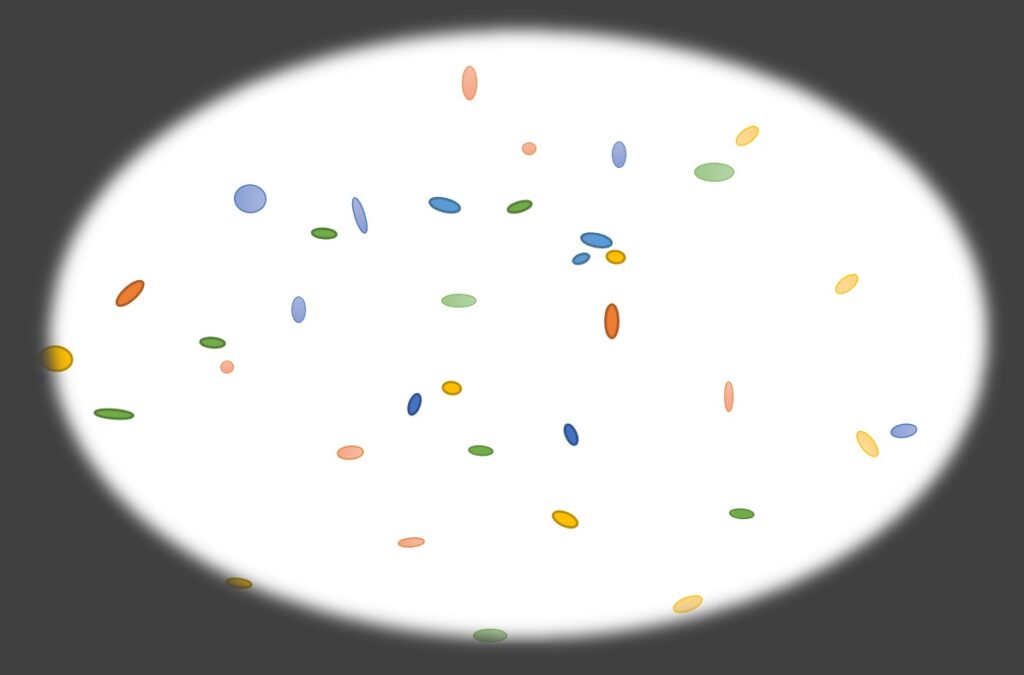 Our imagined universe of colorful galaxies. 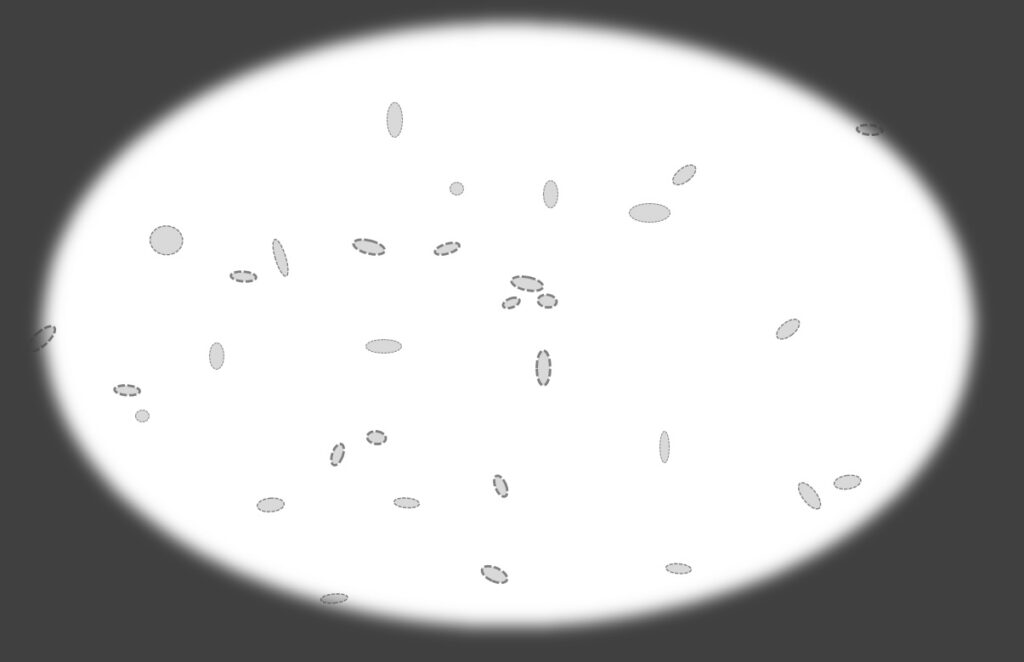 Side-by-side view of our imagined universe (left), and expanded (right). The arrow is of fixed length, to help show the expansion. 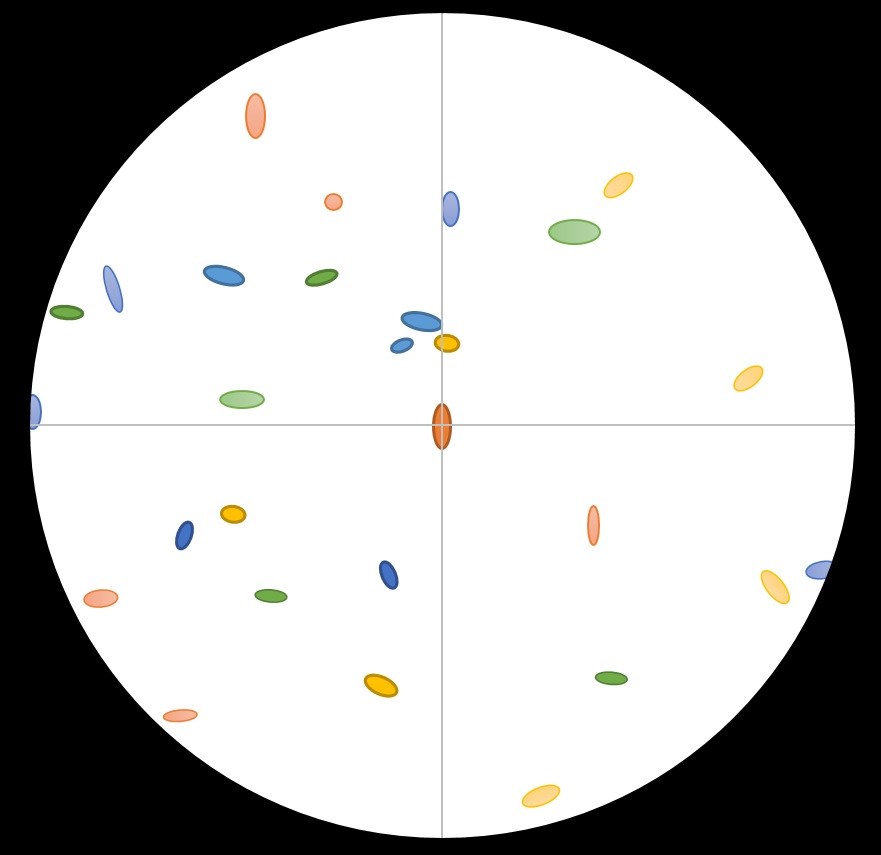 Focusing on one galaxy.

Now let’s do this same thing for the same galaxy, but with the universe expanded— 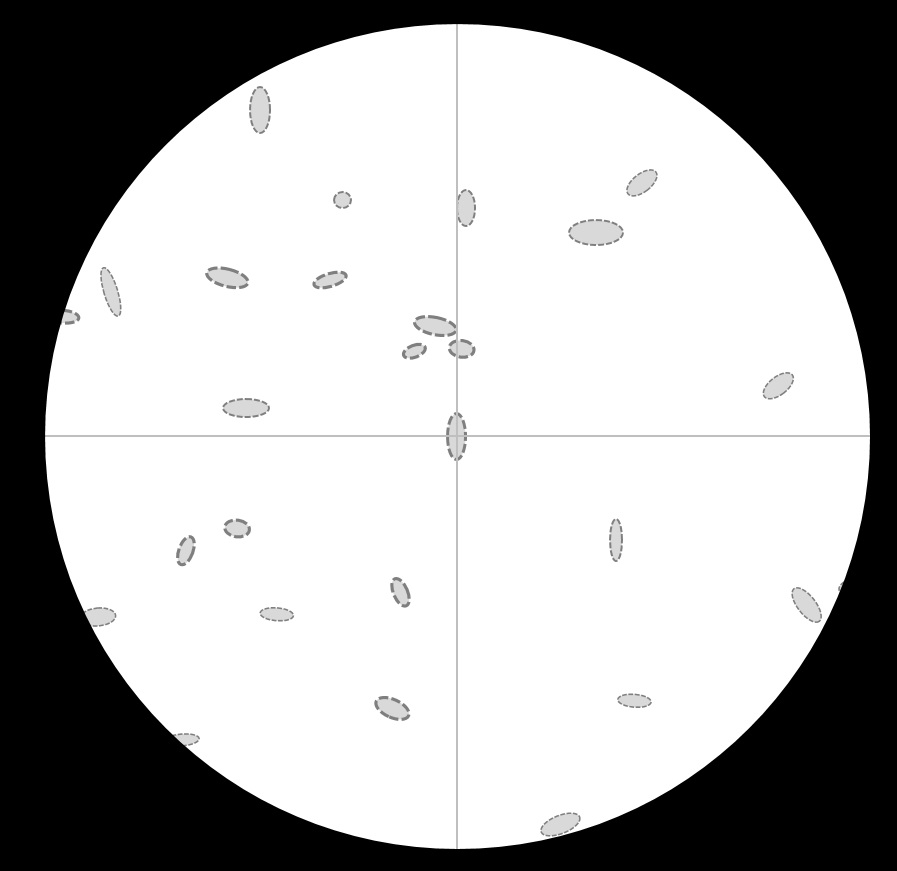 Focusing on one galaxy—expanded universe.

Finally, let’s overlay these two on top of each other, so that we see both from the point of view of the observer in our focus galaxy— 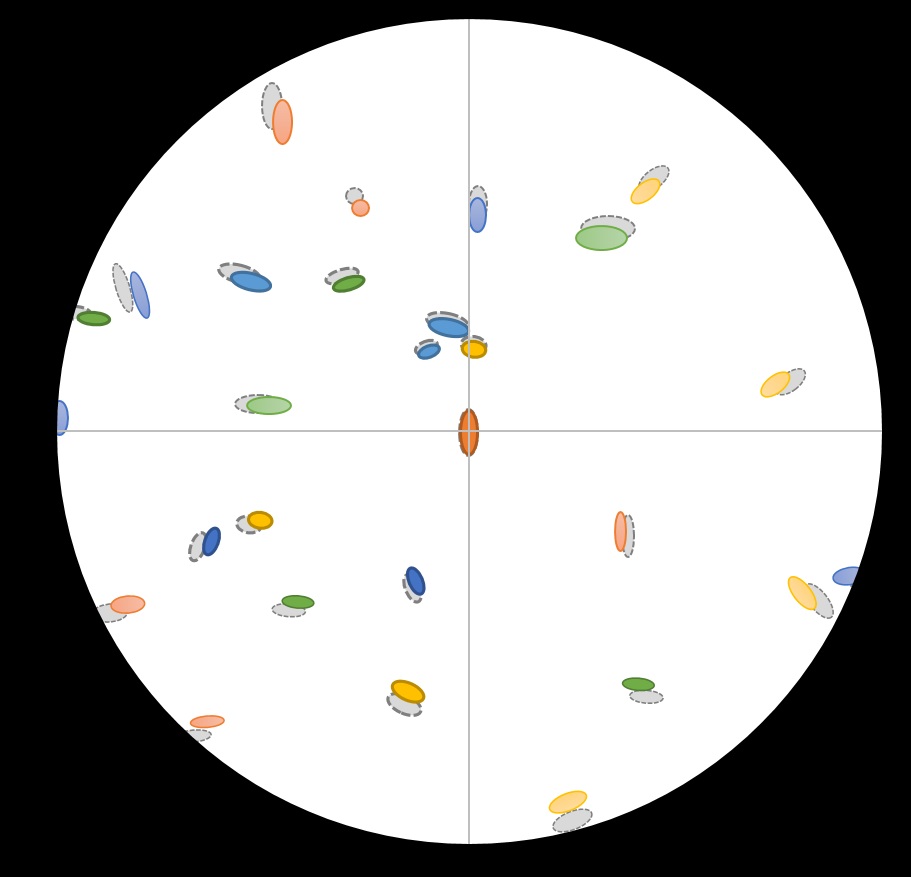 Focusing on one galaxy—overlay of original and expanded universe.

Note how, in the expansion of the universe, our focus galaxy appears to be at the center of the expansion. That makes sense, if you think about it: when we enlarged the universe, we made all the distances between galaxies bigger. So, the distance from our focus galaxy to each and every other galaxy in our imaginary universe is larger. So, each and every other galaxy is moved away from our focus galaxy. Note also that the farther galaxies are moved more than the nearer ones. A “zoomed in” picture shows this more clearly— 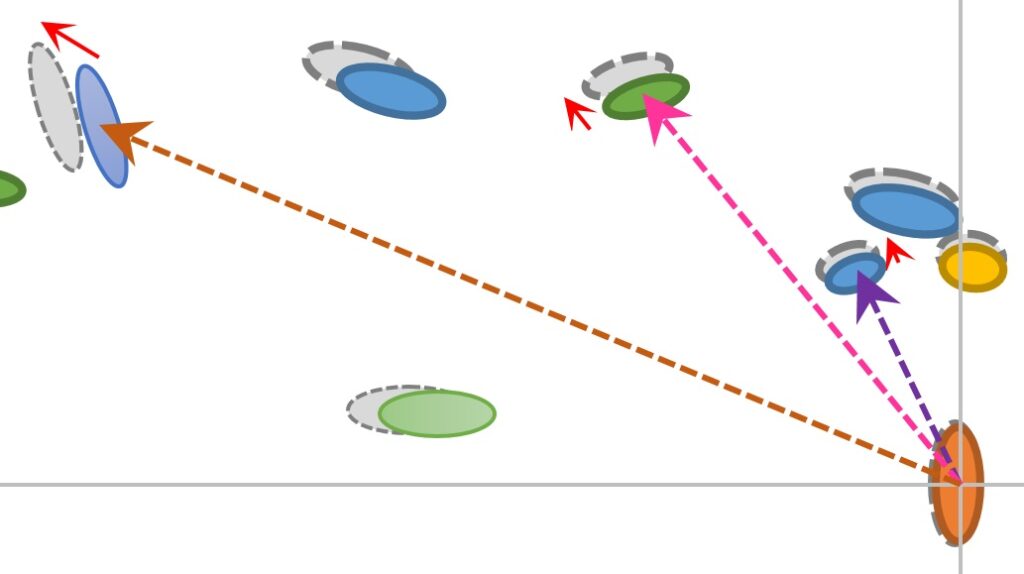 A more distant galaxy (brown arrow) is moved by the expansion more than a nearby galaxy (purple arrow).

If we enlarge the entire overlay picture (you can click on any one of these images to enlarge it) and use a ruler to crudely measure both the distance from our central focus galaxy to every other galaxy, and the amount each galaxy moves away from our central focus galaxy, we find that this trend of farther galaxies moving more than nearer ones holds for all the galaxies, and that the pattern of increase is more or less linear— 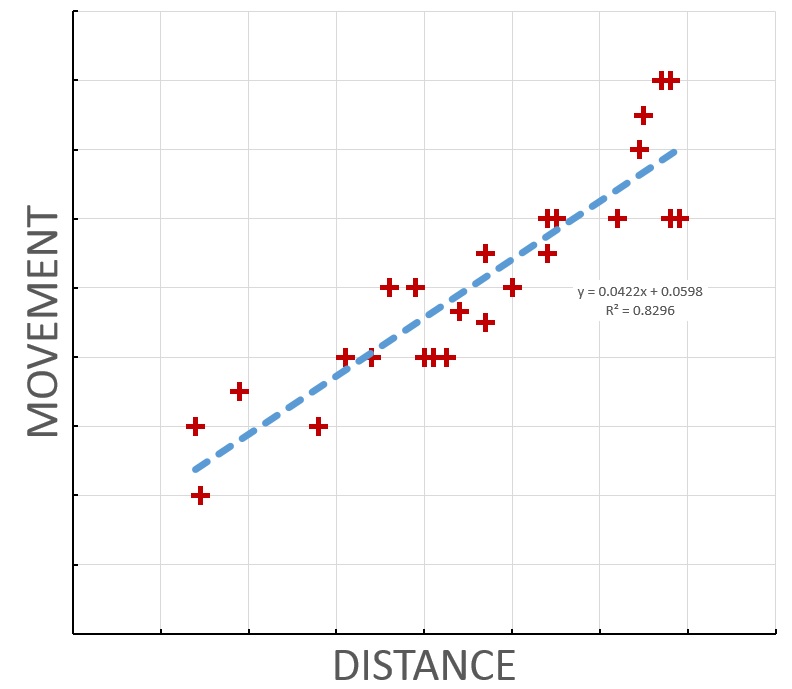 A plot of movement vs. distance, made by making measurements from the overlay picture using a ruler. Note the linear “up and to the right” trend of more distant galaxies moving more.

Try this with a ruler for yourself—you will find you get the same results.

Now, let’s try this out on another galaxy. This time let’s chose the green galaxy that is just to the left of our previous focus galaxy— 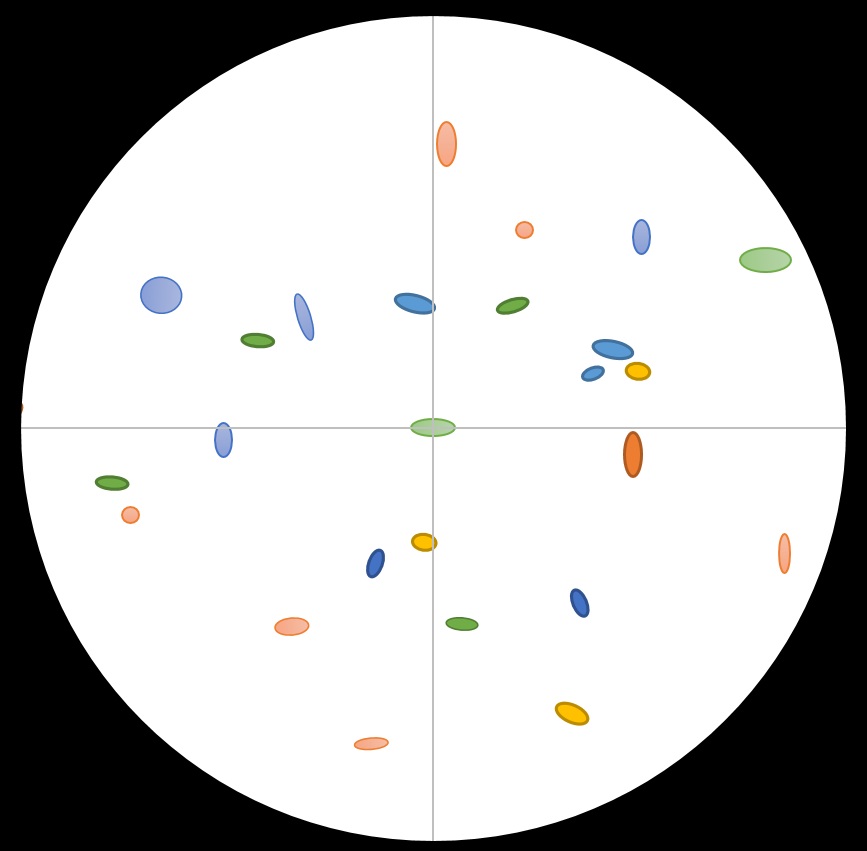 Focusing on a second galaxy.

Here is the overlay for this second galaxy— 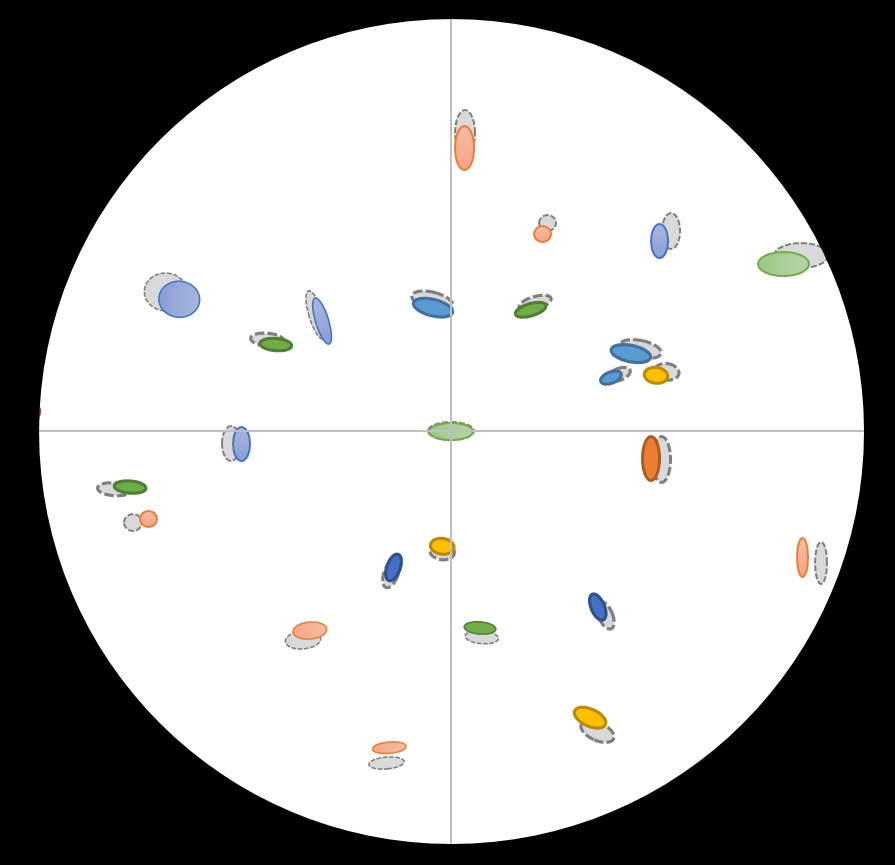 Focusing on the second galaxy—overlay of original and expanded universe.

As you can see, any observer who might be in the second galaxy would see exactly the same pattern as the observer in the first galaxy sees. Both observers see their galaxies as being at the center of an expanding universe, and both see that farther galaxies are moving away from them more, and that the trend is linear.

And this is exactly what we see in our universe. The first person to see it was Edwin Hubble in the late 1920’s. He measured the distances to different galaxies and the movement of those galaxies, and then made a graph of galaxy distance vs. galaxy movement. His graph showed a linear pattern of farther galaxies having more movement away from us. Indeed, graphs like this are now called “Hubble Plots”. Below is Hubble’s original graph, along with a more modern Hubble Plot.

Left—Hubble’s original plot. Right—a modern “Hubble Plot” using data from 108 galaxies. Note how both plots show that same linear “up and to the right” trend, where the more distant a galaxy is from us, the more rapidly it is moving away from us.

Thus, our universe is behaving just like the expanding universe that we imagined above. This is why astronomers say “The universe is expanding.” The view from here, on our planet in our galaxy, is that we are at the center of this expansion. However, as we saw earlier, inhabitants of any other galaxy in the universe will see themselves at the center, too. (Who is really at the center, and whether a center even exists, is a matter for another day.)

However, there have been some astronomers who have not believed that the Hubble Plots are evidence for an expanding universe. One such astronomer was, interestingly enough, Edwin Hubble.

And that is the subject of my post for next week.