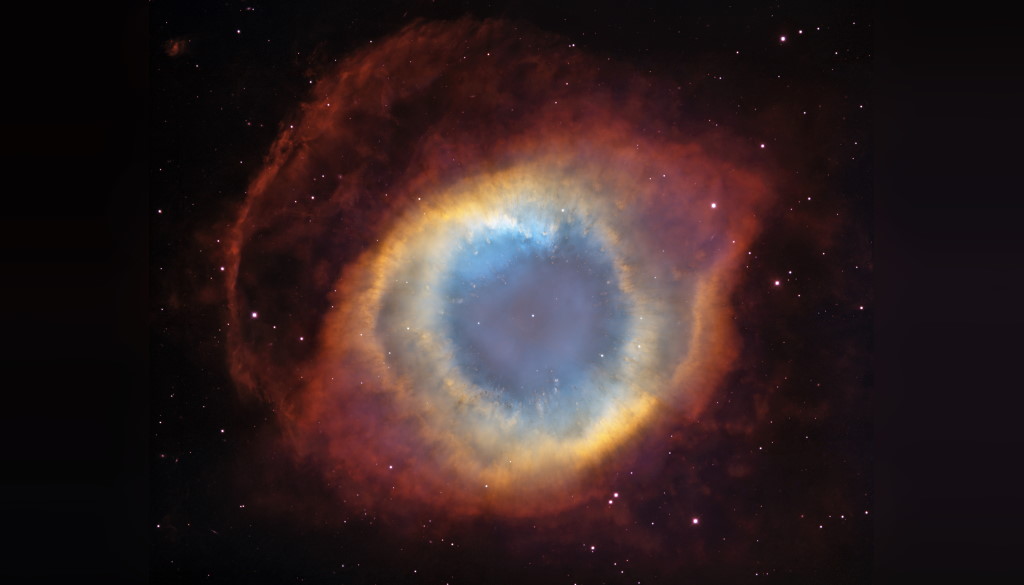 Yesterday at my after-school astronomy club meeting, I had a student tell me he saw the constellation Orion! Awesome! Only 87 more to go!

For my next constellation assignment, I showed the students these slides of where Lyra was located at sunset – I then showed them a couple images of the Ring nebula, and the Helix nebula as a comparison (see Universe section below).

Next meeting will be in the new year – I’m going to go over open and globular clusters. 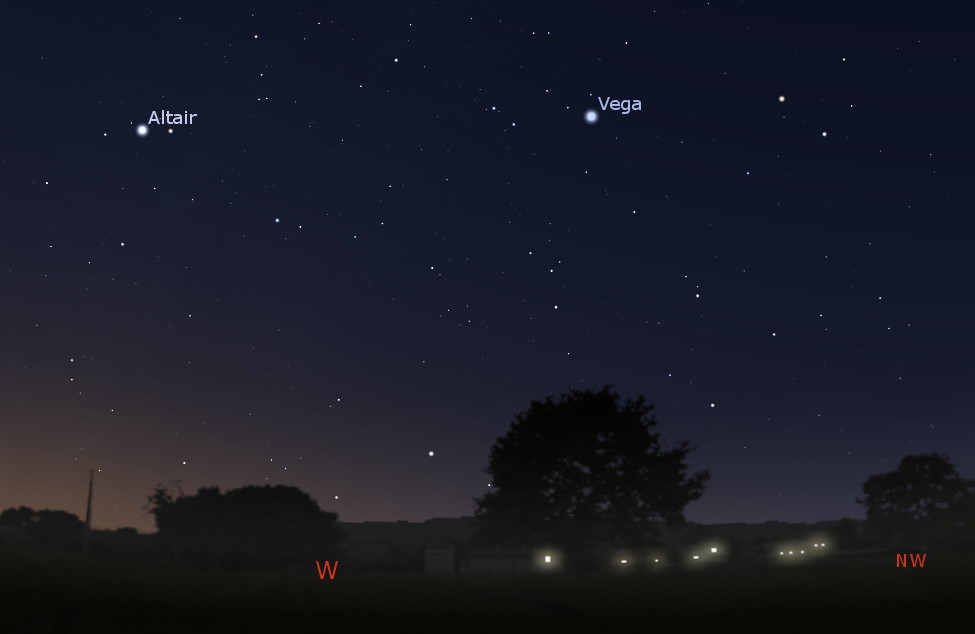 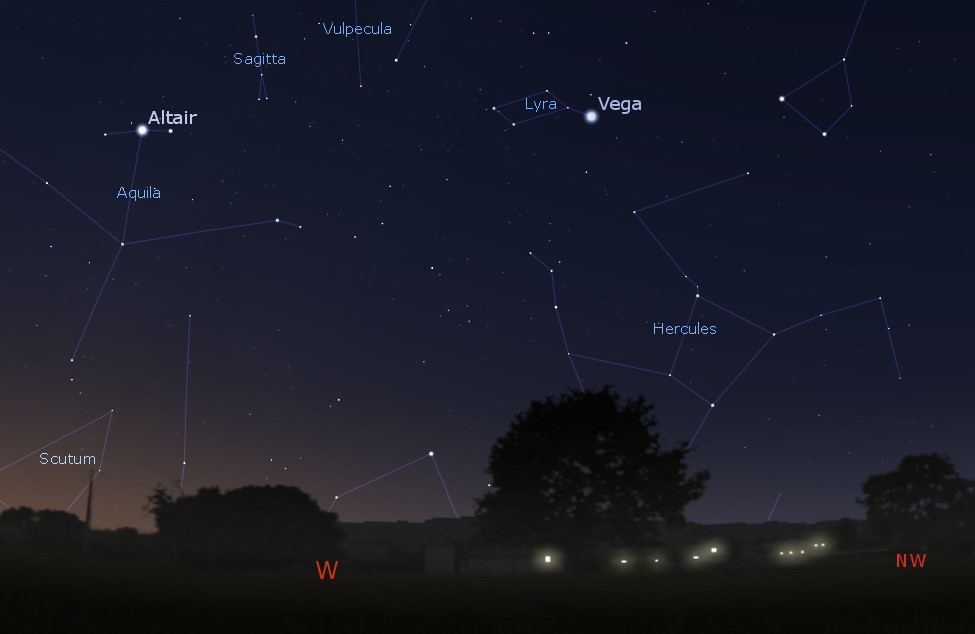 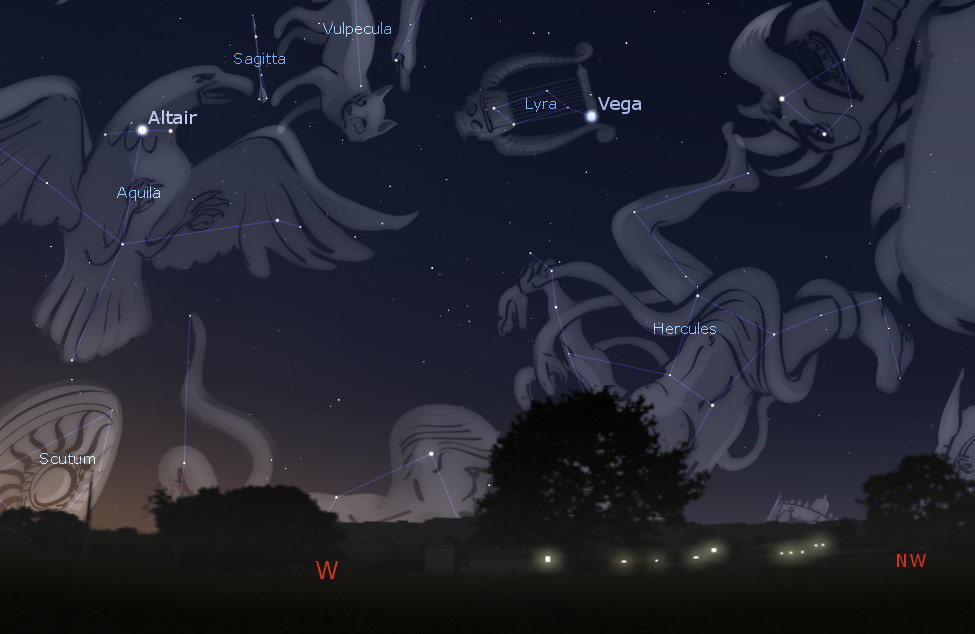 Jupiter, Saturn and Venus appear in the south-southwestern sky after sunset all week. We’re heading up on one year after the close conjunction of Jupiter and Saturn on Dec. 21st of last year – it’s interesting to note how far apart the two planets have spread.

Mars continues to appear low above the southeastern horizon before sunrise all week.

The Moon appears near the planet Uranus high in the eastern sky after sunset on Dec. 14th.

The Moon appears between the star Aldebaran and the Pleiades star cluster in the eastern sky after sunset on Dec. 16th.

The Moon appears in the center of the Winter Hexagon in the eastern sky after sunset on Dec. 18th.

The Moon appears near the star Pollux in the eastern sky after sunset on Dec. 20th.

Snoopy, the Zero G Indicator for the Artemis I mission

The Sun has 3 spots – Spaceweather.com says “Little sunspots are popping up all over the sun’s SE quadrant. None poses a threat for strong flares–not yet.”

The Sun seen in 193 angstroms on December 13th

Both northern and southern coronal holes are open and fairly large; there are a couple coronal holes in the southern hemisphere that seem to want to stretch towards each other. LOTS of coronal loop activity in the SE quadrant.

The Sun seen in 304 angstroms on December 13th

Several long-lived prominences, lots of filaments, and a couple “angry” regions of activity rotating into view.

Oh my goodness! Go play with this website RIGHT NOW!!!

Position of the planets & several spacecraft in the inner solar system on December 14th:

The images on display are fantastic! Detroit Metro Airport needs to do this!

Flight 17 of the Mars Helicopter

Get out your red/blue glasses!

SpaceX Crew Dragon to Head to ISS Next Week

Crew of #NS19 Headed to space on Dec. 11th on board #NewShepard.

The mere fact that gravitational waves can be detected – just blows me away!

I showed these images to students during my after-school astronomy and space science club:

“The Ring Nebula (M57), is more complicated than it appears through a small telescope. The easily visible central ring is about one light-year across, but this remarkably deep exposure – a collaborative effort combining data from three different large telescopes – explores the looping filaments of glowing gas extending much farther from the nebula‘s central star. This composite image includes red light emitted by hydrogen as well as visible and infrared light. The Ring Nebula is an elongated planetary nebula, a type of nebula created when a Sun-like star evolves to throw off its outer atmosphere to become a white dwarf star. The Ring Nebula is about 2,500 light-years away toward the musical constellation Lyra.” – APOD

This composite image is a view of the colorful Helix Nebula taken with the Advanced Camera for Surveys aboard NASA/ESA Hubble Space Telescope and the Mosaic II Camera on the 4-meter telescope at Cerro Tololo Inter-American Observatory in Chile. The object is so large that both telescopes were needed to capture a complete view. The Helix is a planetary nebula, the glowing gaseous envelope expelled by a dying, sun-like star. The Helix resembles a simple doughnut as seen from Earth. But looks can be deceiving. New evidence suggests that the Helix consists of two gaseous disks nearly perpendicular to each other.

I also showed this image – bonus points if you know which object is not actually a planetary nebula!