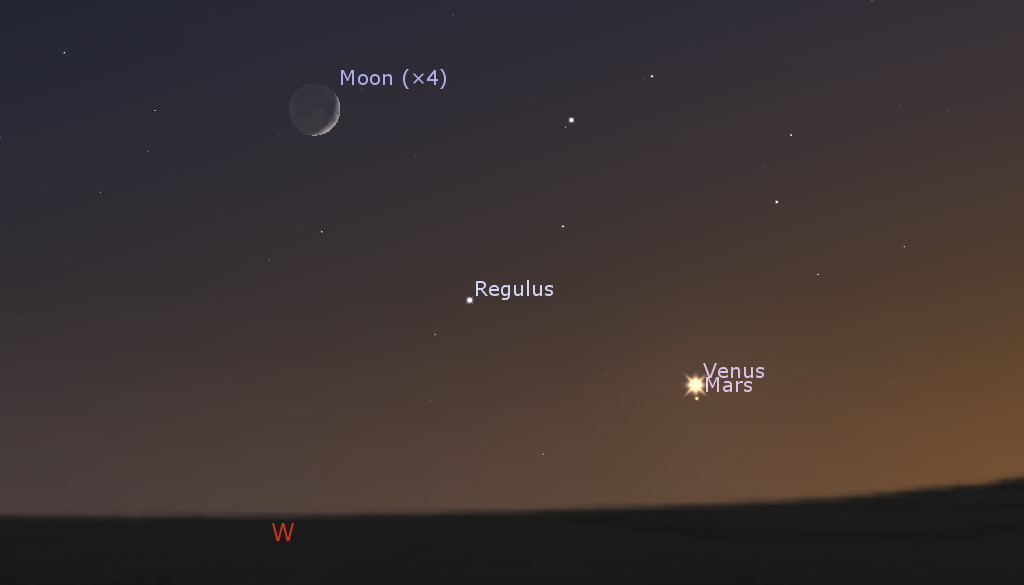 The Hubble Space Telescope has been in safe mode since June 13th – NASA engineers have been diagnosing the issue, and have been preforming a boatload of tests. Later this week, we may see the Hubble switch to backup hardware.

These efforts will either fix the problem, or they will not. If the problem is fixed, GREAT! The Hubble gets a few more years! If not, well… we may be seeing the end of the Hubble as a useful scientific instrument.

In either case, the Hubble has been continuously losing altitude for years – eventually will become a large piece of space debris in serious need of some sort of directed reentry. No one wants the end of Hubble’s story to be a news article about smoldering pieces of Hubble crashing through someone’s roof; Although… I can only imagine what you could sell those chunks for…

To see a timeline of operations being preformed on the Hubble Space Telescope, see this NASA site: [LINK]

There will be a mega-conjunction of the crescent Moon & the star Regulus, and the planets Venus & Mars in the western sky at sunset on July 13th – Venus and Mars appear VERY close to each other. If you are driving west at sunset, be careful – this may draw your eyes!

Jupiter and Saturn appear low in the southeastern sky before midnight.

Before sunrise, Jupiter and Saturn appear high above the southern horizon.

The Waxing Crescent Moon appears in conjunction with the binary star Spica in the southwestern sky after sunset on July 16th.

Spica is a rotating ellipsoidal variable star comprised of a blue giant and a variable star of the Beta Cephei type. The two stars are so close together they are egg-shaped due to each star’s gravity, and can only be separated by their spectra. When I created the image below, I positioned the view to show how truly close the two stars are!

The Waxing Gibbous Moon appears in conjunction with the red giant star Antares in the southern sky after sunset on July 16th.

The constellation Cygnus appears high in the east-southeastern sky after sunset. The star Albireo is a great observing target – its colors are striking! When looking at Albireo, defocus your telescope ever so slightly – the colors may be a bit easier to see.

The Sun has 2 sunspots. SpaceWeather.com says “These sunspots have stable magnetic fields that pose little threat for strong solar flares.”

Active coronal loop activity over the two sunspot regions – another couple regions with coronal loops are rotating out of view. The northern coronal hole appears to have diminished a little, the southern hole has merged with a huge and long coronal hole  – stretching up towards the equator.

A long-lived prominence on the Sun’s limb (lower right); AR 2842 (upper left) is crackling with flares!

Position of the planets & several spacecraft in the inner solar system on July 13th:

Position of the planets in the middle solar system – the orbit of asteroid Pallas is highlighted:

Are your city’s streetlights “dark-sky friendly?”

The Shanghai Astronomy Museum was intentionally designed without straight lines or right angles.

“NASA’s Hubble Space Telescope, has captured a spectacular pair of galaxies engaged in a celestial dance of cat and mouse or, in this case, mouse and mouse. Located 300 million light-years away in the constellation Coma Berenices, the colliding galaxies have been nicknamed “The Mice” because of the long tails of stars and gas emanating from each galaxy. Otherwise known as NGC 4676, the pair will eventually merge into a single giant galaxy.

The Hubble image shows the most detail and the most stars that have ever been seen in these galaxies. In one galaxy a bright blue patch is resolved into a vigorous cascade of clusters and associations of young, hot blue stars, whose formation has been triggered by the tidal forces of the gravitational interaction. Streams of material can also be seen flowing between the two galaxies.” – NASA