The Moon joins Mars and Saturn in the southern sky before sunrise.

Jupiter is very close to the double-star Zubenelgenubi II (Alpha Librae) after sunset on June 5th – so close you might be able to get the double-star and Jupiter with its moons in the same view through a telescope! 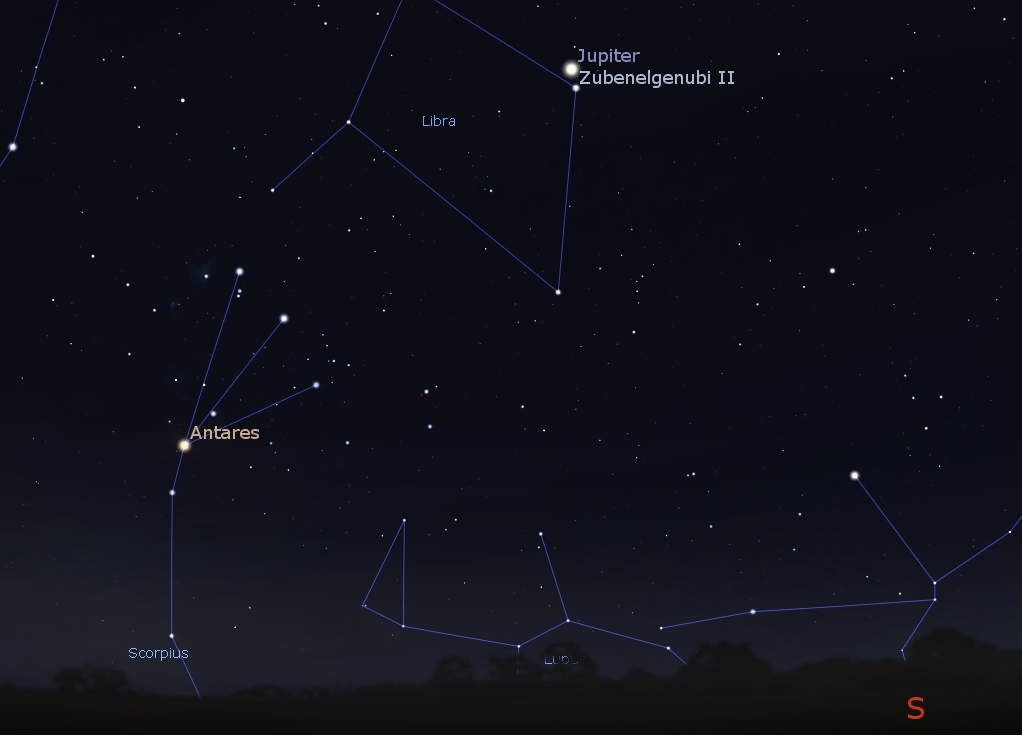 Venus aligns with the stars Pollux and Castor on June 10th shortly after sunset. 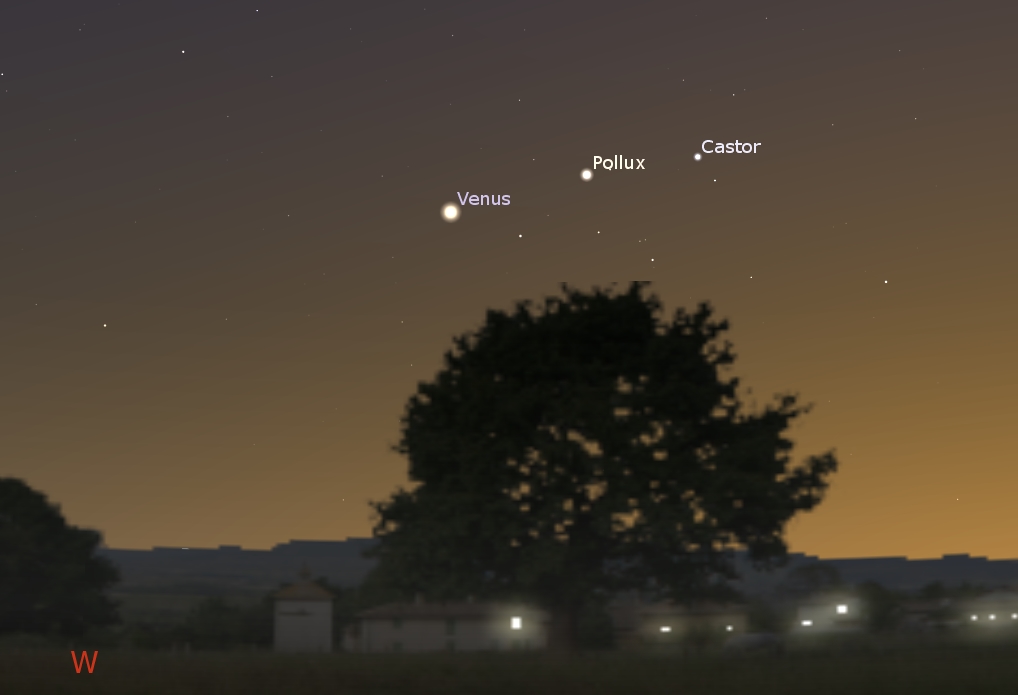 The Moon is a waning gibbous, and will be at third quarter on June 6th. The Moon will be a waning crescent after the 6th, visible low in the eastern sky before dawn.

The constellation Lyra is high in the eastern sky after sunset; the boxed area in the image below is the location of M57 – the Ring Nebula: 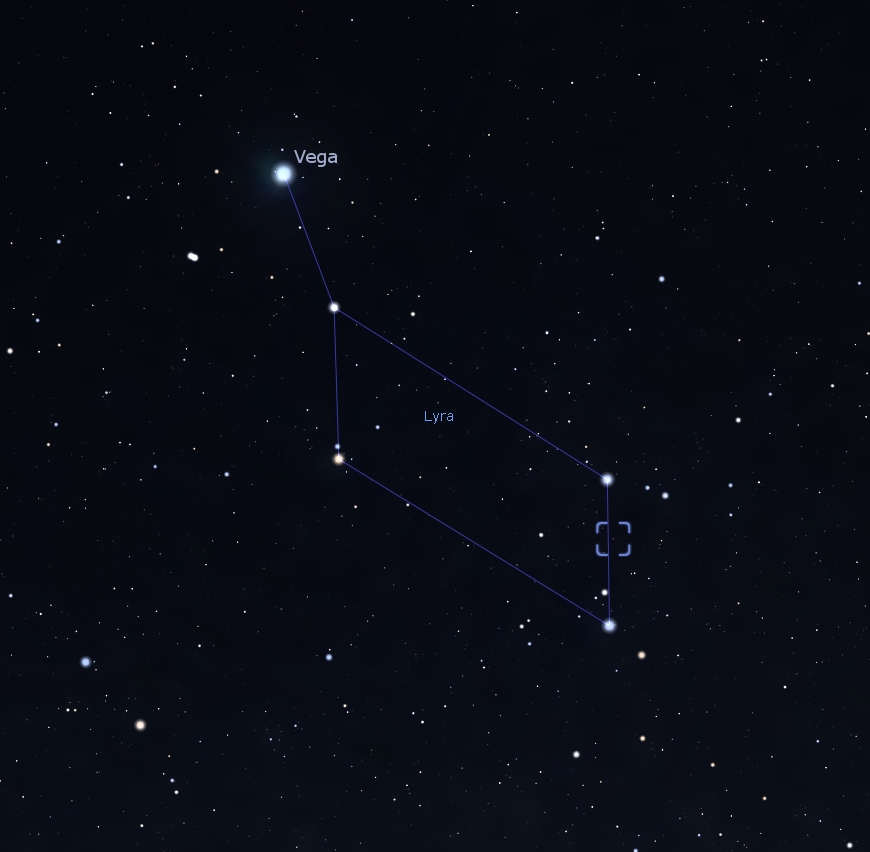 M57 is a planetary nebula – expanding shells of luminous gas expelled by stars at the ends of their lives. Planetary nebulae can be some of the most beautiful objects in the sky. 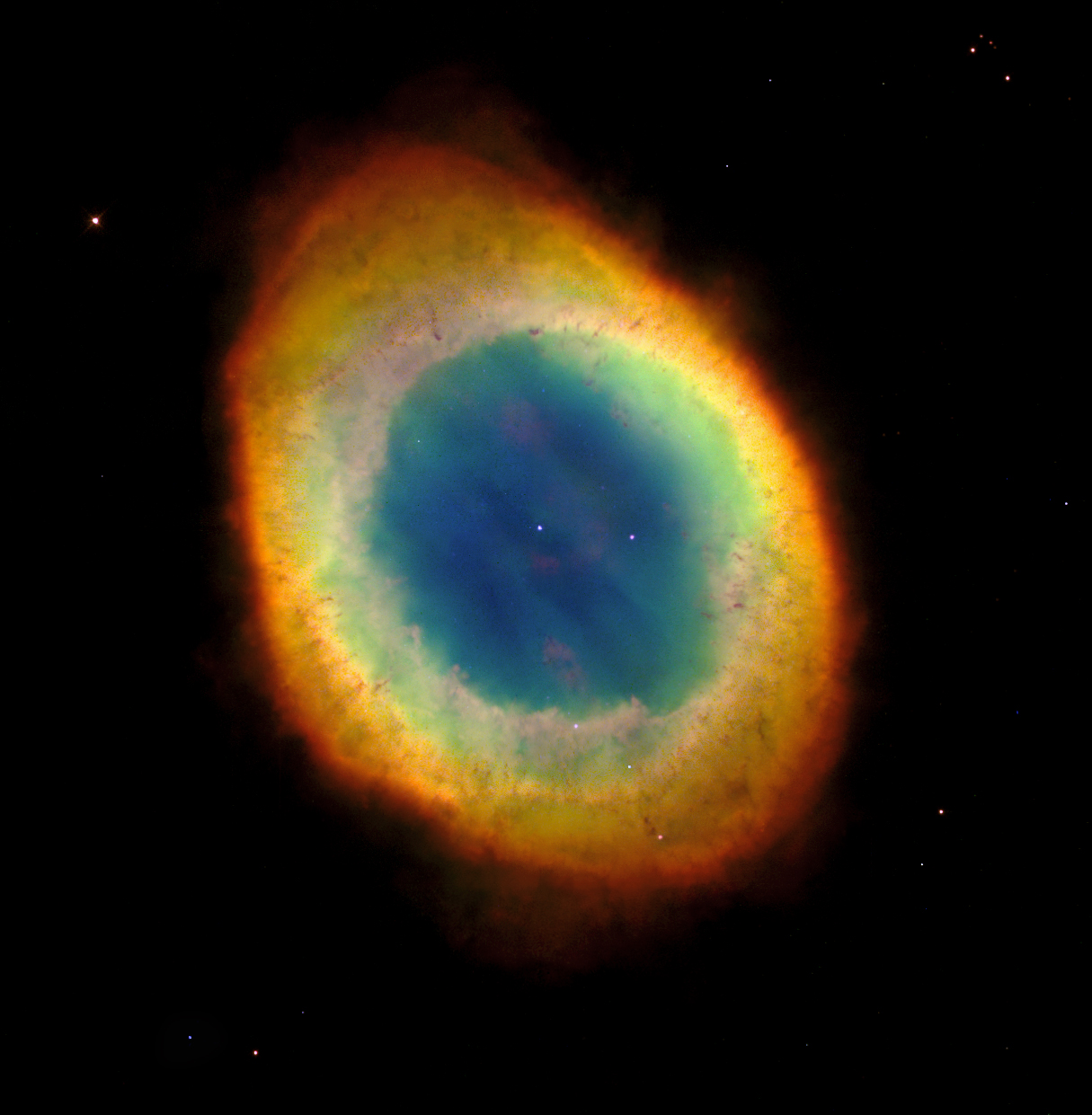 When viewed in infrared light, the Ring Nebula shows even older shells of gas expelled thousands of years ago. These ghostly shells appear almost like petals of a flower: 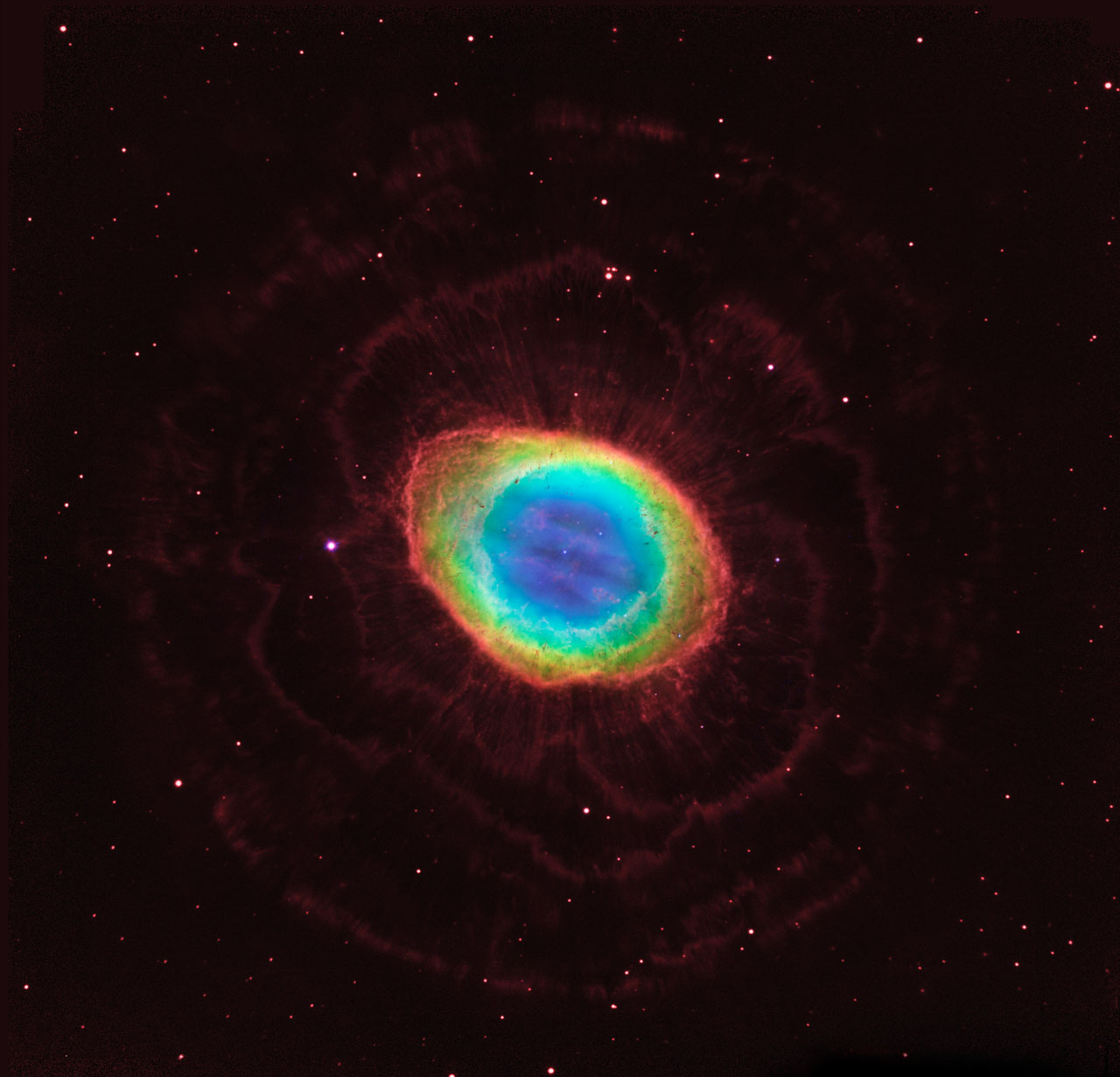 Active Region AR2712 is rotating out of view, leaving the Sun spot-free. AR2712’s coronal loop activity can be seen on the right side of the video below. There is a large coronal hole at the Sun’s north pole; the hole at the south pole appears to have reduced in size.

SpaceWeather.com says: “Earth is exiting a stream of solar wind that sparked G1-class geomagnetic storms and apparitions of STEVE during the weekend. NOAA forecasters have reduced the chance of additional storms on June 4th to 25% as the solar wind speed subsides.” The solar wind speed is 430.9 km/sec, with a density of 7.9 protons/cm3.

There are several long-lived prominences on the Sun’s limb, AR2712 is the bright orange area rotating out of view on the right side of the image below:

We got HIT! Asteroid 2018 LA was discovered about 8 hours before it plowed into Earth’s atmosphere at around 38,000 mph and exploded over southern Africa. At the time of this writing, no strewn field or meteorites have yet been found – I’d bet by this time next week someone will have found something.

Now might be a good time to mention that June 30th is International Asteroid Day, with worldwide events held each year on the anniversary of the Tunguska impact of 1908, with the goal of raising public awareness about asteroid impact hazards. 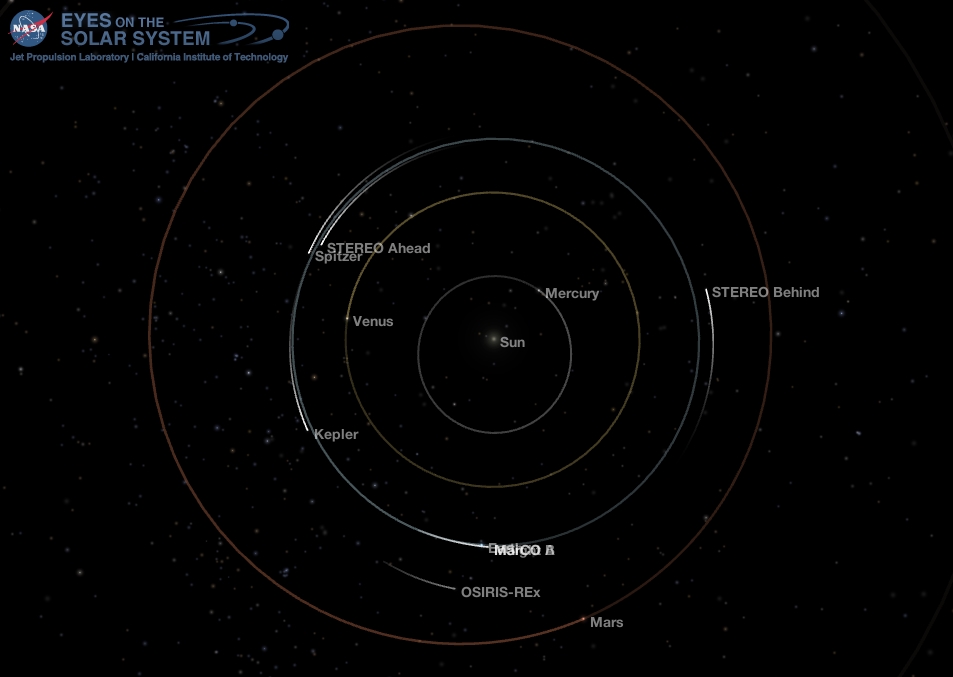 Position of the planets in the inner solar system, May. 29, 2018. Credit: NASA Eyes on the Solar System / Bob Trembley. 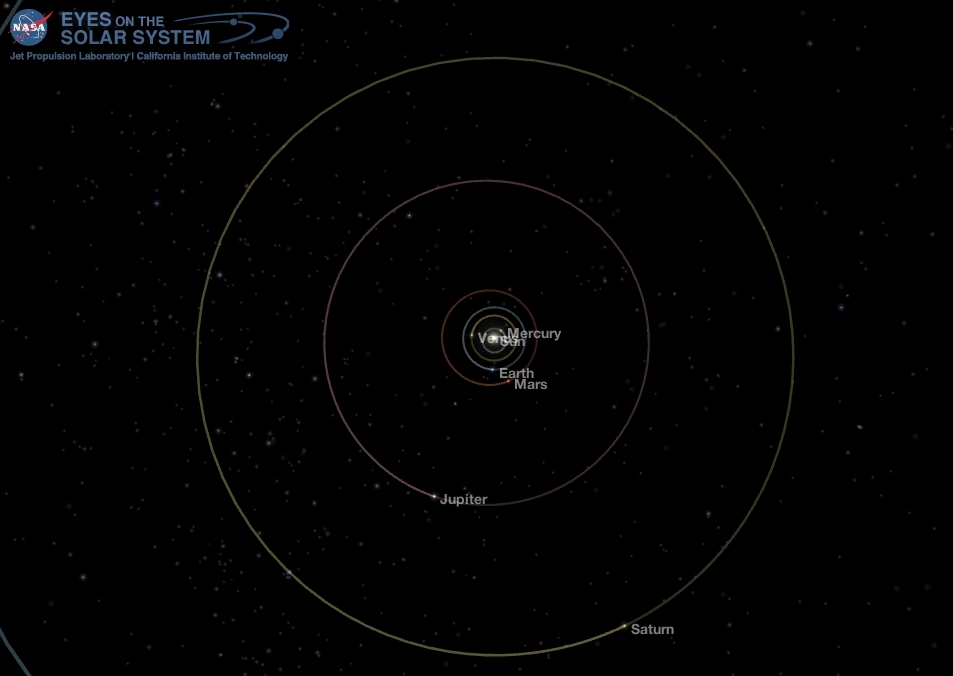 Position of the planets in the middle solar system, May. 29, 2018. Credit: NASA Eyes on the Solar System / Bob Trembley. 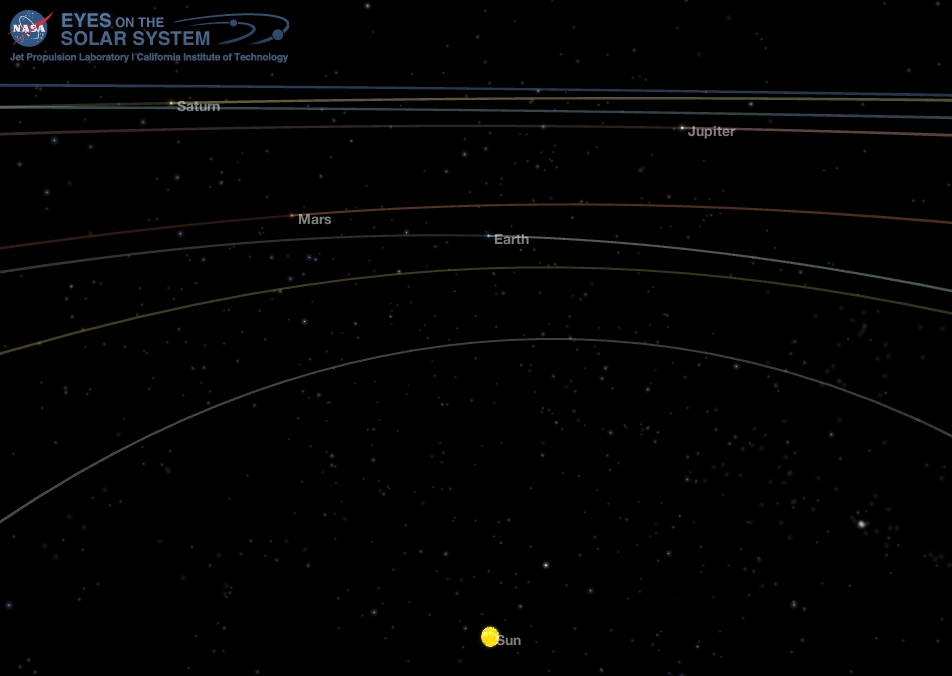 Solar System from behind the Sun looking towards Earth May 29 2018. Credit: NASA Eyes on the Solar System / Bob Trembley.