Jupiter has almost left the morning sky; Mars and Saturn are slowly making their way southward. I was a bit surprised to catch a flyover of the International Space Station when I copied this image from Stellarium!

Jupiter is in the southeastern sky after sunset, and is a great observing target. 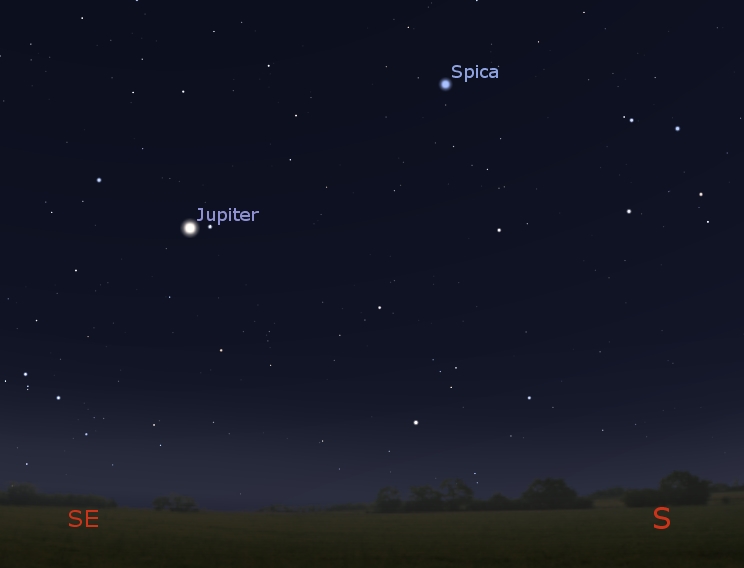 The Moon is at first quarter on the 22nd, and then a waxing gibbous until full on the 29th. This whole week will be great for observing the moon through telescopes. The Moon is in the southwestern sky after sunset for the next few days. 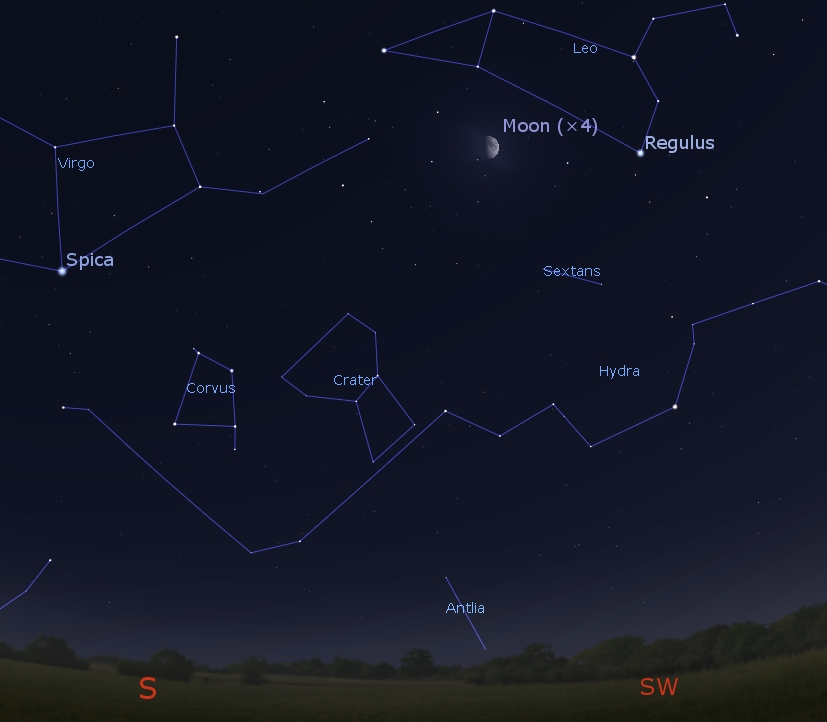 We have a spot! Active Region (AR) 2710 is rotating into view on the Sun – it’s so small it may be difficult to see through telescopes for a few days. 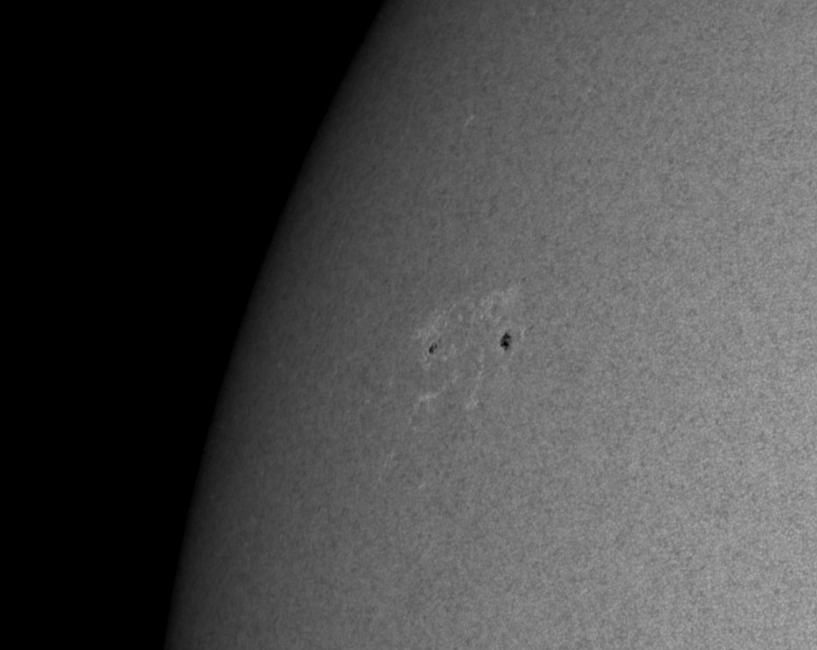 AR2710 has a lot of coronal loop activity above it (left side of video), and coronal holes remain at both poles. Surprisingly, there are no Earthward facing coronal holes along the equator this week.

The solar wind speed is 309.5 km/sec, with a density of 13.4 protons/cm3. SpaceWeather.com says: “NOAA forecasters say there is a 40% chance of minor geomagnetic storms on May 23rd when a stream of solar wind grazes Earth’s magnetic field. The gaseous material is flowing from a northern hole in the sun’s atmosphere. High-latitude sky watchers should be alert for auroras. Indeed, in Antarctica the light show has already begun.”

Yesterday at my wife’s school, I gave my lecture about the Sun, and set up my solar telescope. I was able to show 2 science classes a prominence on the limb Sun. Unfortunately it clouded over, and I was unable to show a 3rd class…. Michigan…

This is the position of the planets in the inner solar system: 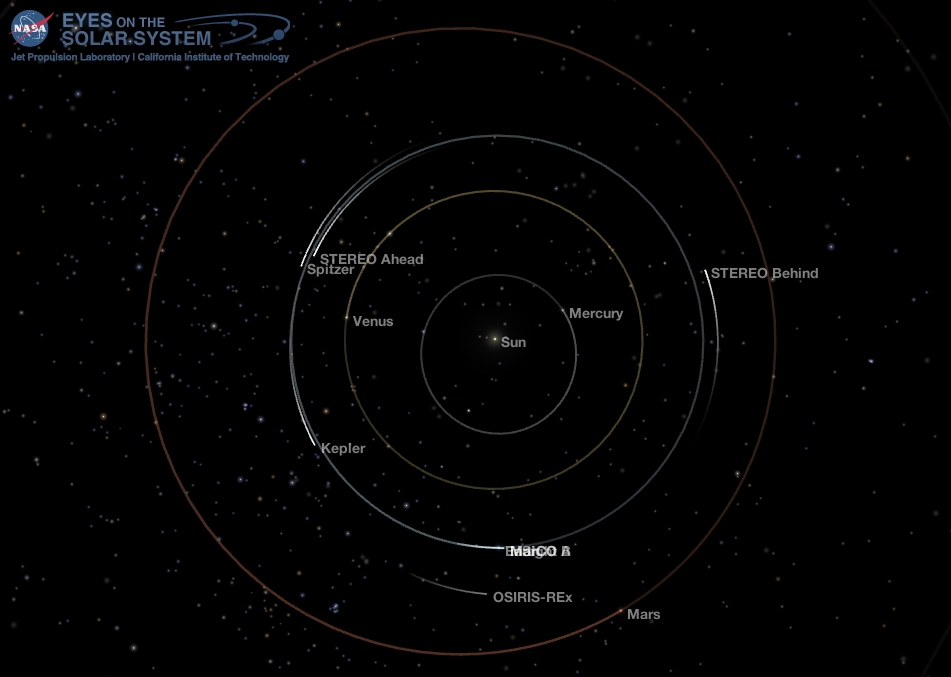 Position of the planets in the inner solar system, May. 22, 2018. Credit: NASA Eyes on the Solar System / Bob Trembley. 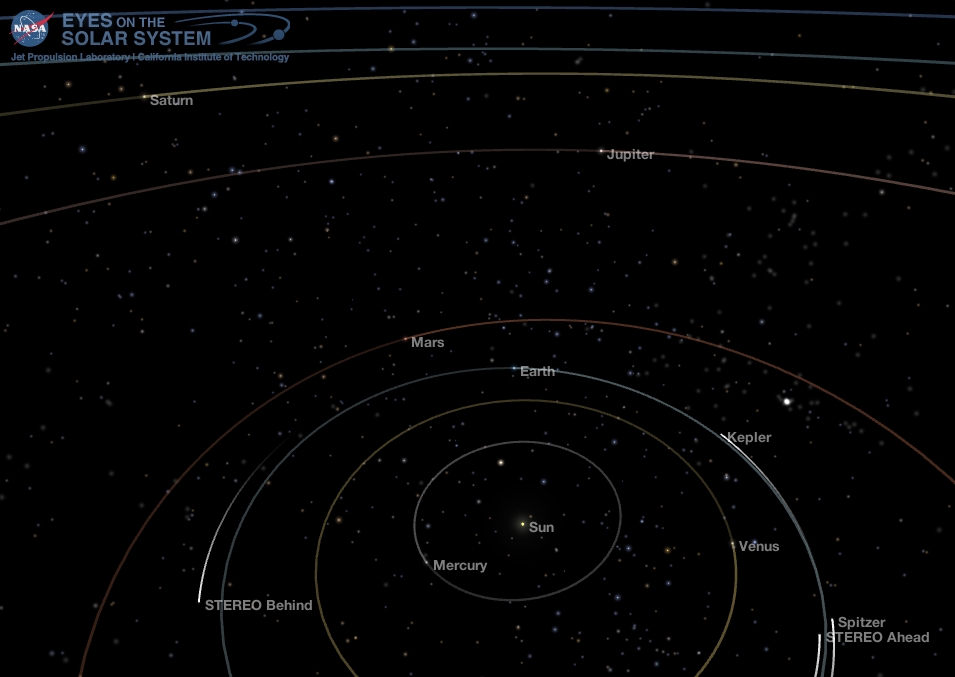 Position of the planets in the inner solar system – alternate view, May. 22, 2018. Credit: NASA Eyes on the Solar System / Bob Trembley.

InSight and the MarCO A&B CubeSats continue to pull away from Earth on their journey to Mars. 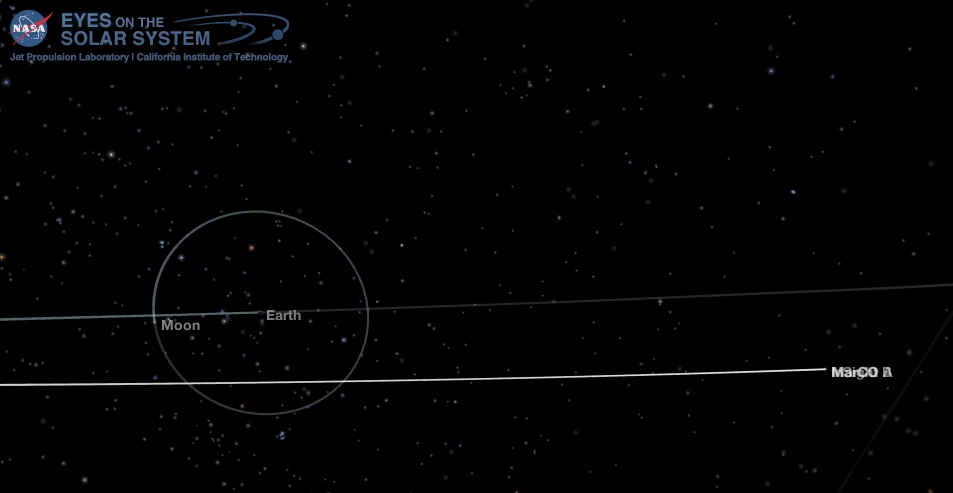 Position of the MarCo A&B CubeSats and Mars InSight, May. 22, 2018. Credit: NASA Eyes on the Solar System / Bob Trembley.

Juno is heading in towards another perijove at Jupiter. 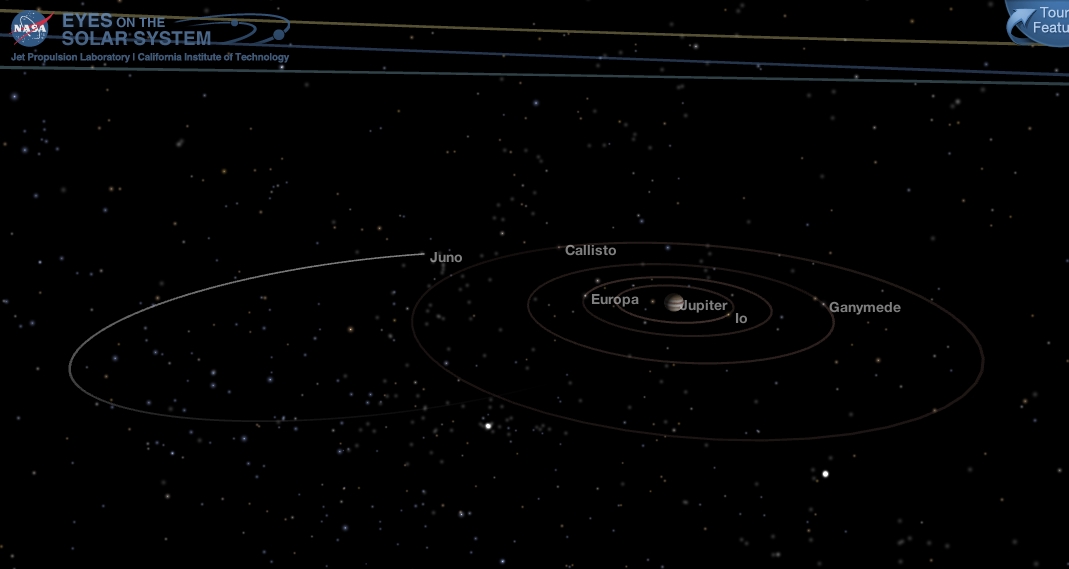 Juno will pass close to Jupiter (perijove) on May 24th. 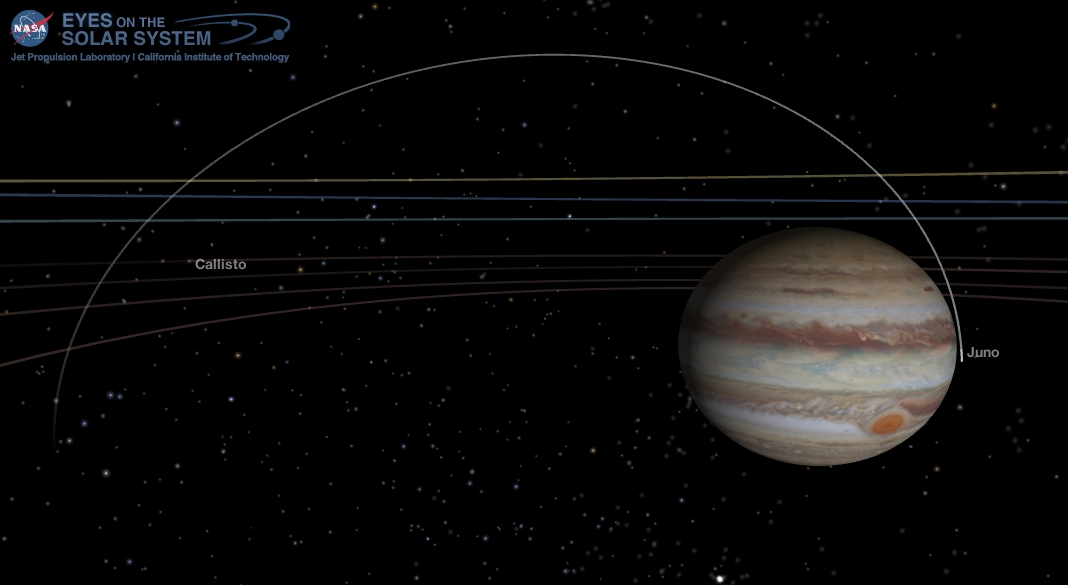 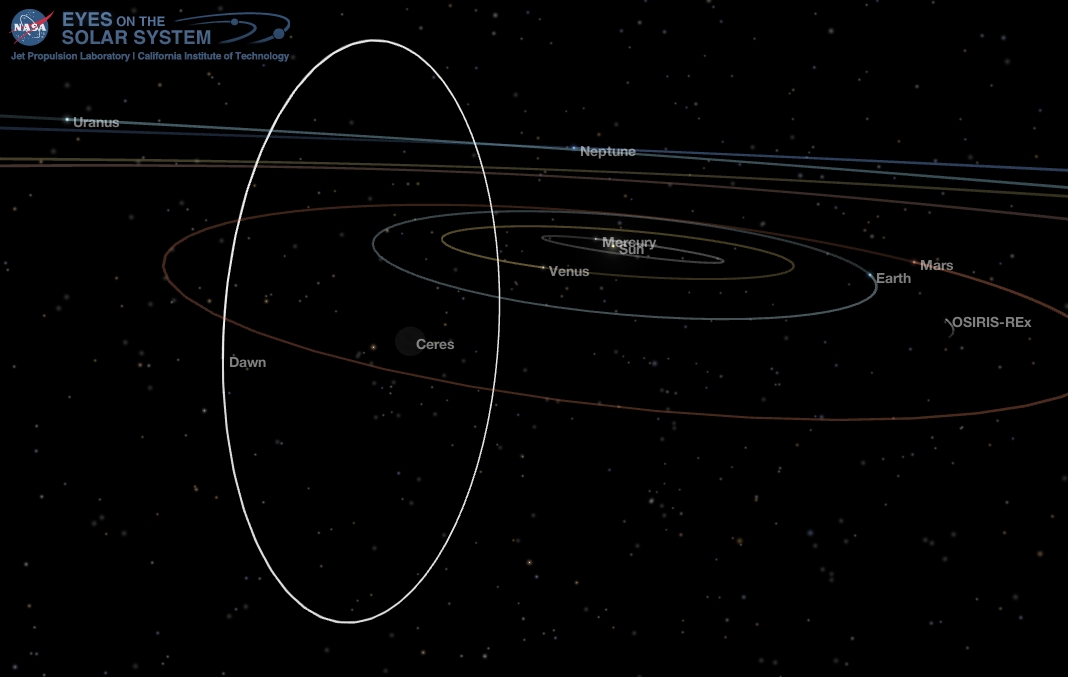 Position of the Dawn Spacecraft, May 22, 2018. Credit: NASA Eyes on the Solar System / Bob Trembley.

The trajectory of the Transiting Exoplanet Survey Satellite (TESS) spacecraft was altered by an encounter with the Earth’s Moon.

Position of the TESS Spacecraft, May 22, 2018. Credit: NASA Eyes on the Solar System / Bob Trembley.

The OSIRIS-REx asteroid sample return mission continues to close in on asteroid 101955 Bennu. 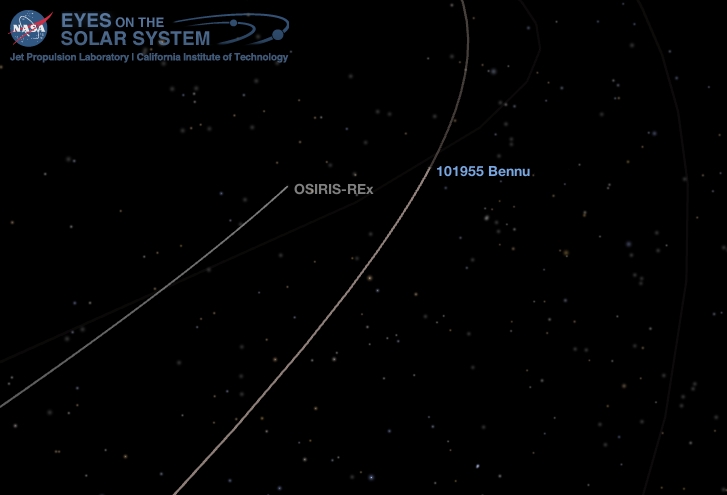