The sample head overflowing with bits of asteroid Bennu has been safely stowed in the return capsule of NASA’s OSIRIS-REx spacecraft – I can stop waving my hands frantically and breathe a bit easier! Now, I have to hurry-up-and-wait for launch windows and the time-consuming interplanetary Hohmann orbital mechanics before that sample is returned to Earth in 2023.Like Douglas Adams said: “Space is Big!”

I REALLY want a piece of Bennu; I asked Dolores Hill several questions about a possible privately-funded sample return mission with a larger sample head.

Dolores said “A huge sampling head may or may not be helpful. If ours had been too big, it would have made it harder to locate a large enough, safe site. A larger head would be heavier – require more gas to flow through it, etc. But, who knows, the engineers know how to scale up. Almost anything is possible given enough resources.

Regarding paying for itself…”In my opinion, it would depend on what the investors wanted from such a mission” – in my case samples for sale to collectors or researchers.

Dolores said that the OSIRIS-REx mission cost ~$800 million over 14 years, not including the launch vehicle! YIKES! Guess I’d need to find some wealthy investors or collectors!

I asked if there were any quarantine requirements for extraterrestrial samples? “Not for Bennu samples because of its history and the surface has been bathed by solar UV for a long time. That said, we will try to keep the pristine returned sample as clean as possible from us (terrestrial contaminants).”

Dolores told me that The TAGSAM  (sample collection head) will undergo studies and be archived at NASA-JSC as space hardware; she thinks the next sample return mission will be a NASA-ESA Mars mission. 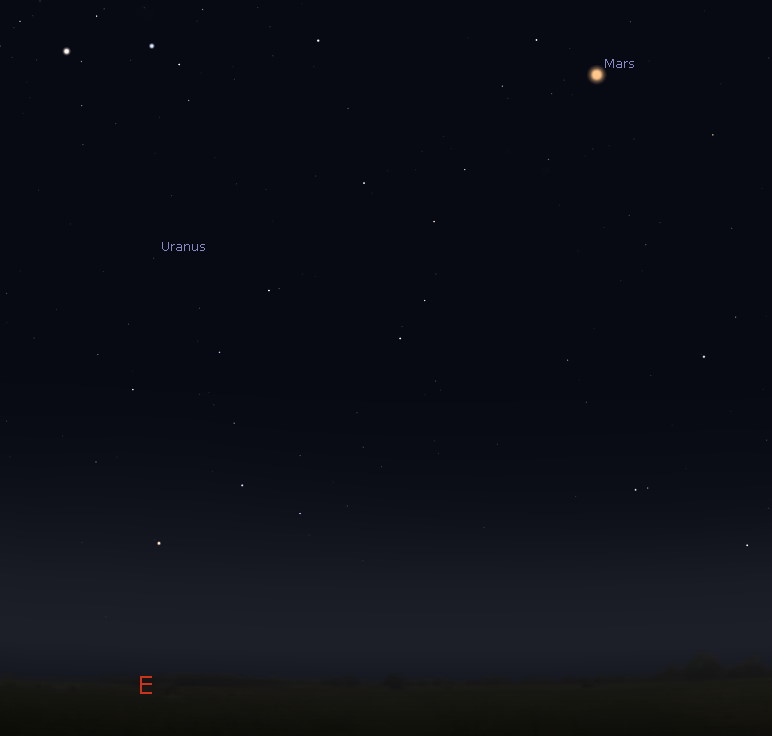 Mercury appears with Venus in the eastern predawn sky from now until Nov. 25th – Mercury will appear its highest on Nov. 8th. 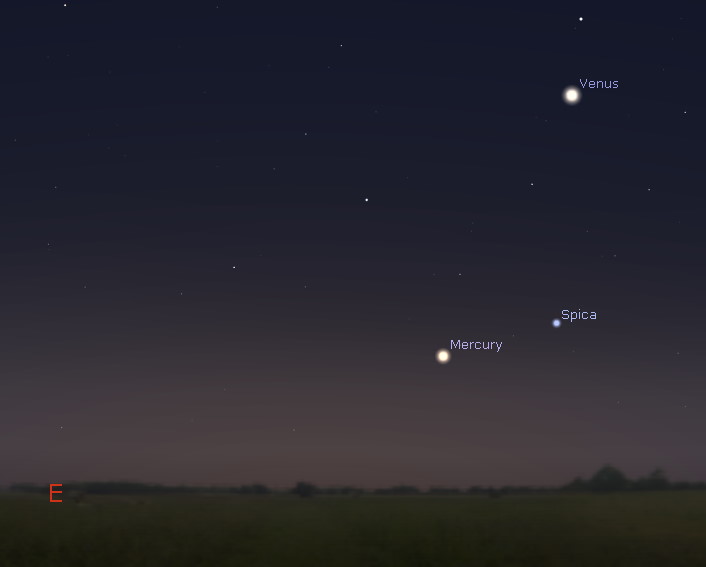 Jupiter and Saturn appear in the south-southwestern sky at dusk, and set in the southwest around 9:00 PM. 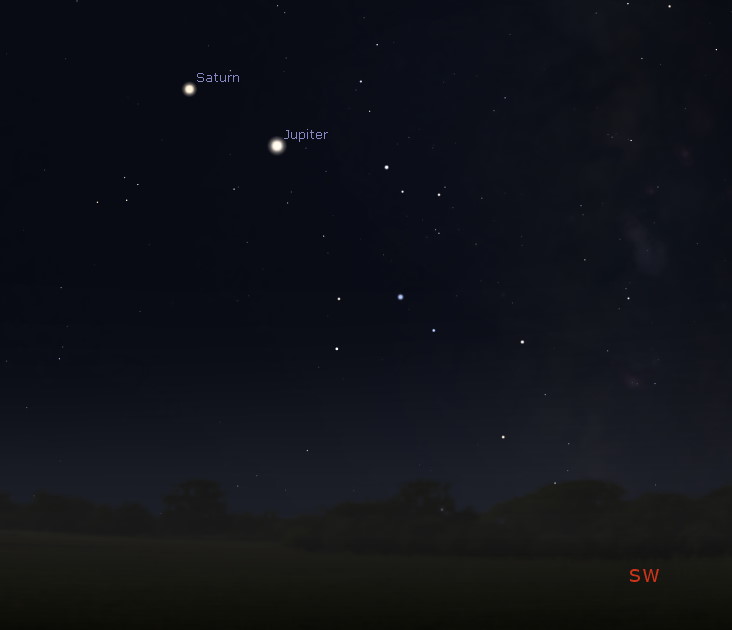 The Moon appears high in the west-southwestern predawn sky near the constellation Orion for several mornings.

The third quarter Moon occurs on Nov. 8th – it rises around midnight, and is visible to the south after sunrise.

After Nov. 8th the Moon will be a waning crescent – visible low to the east before sunrise.

Annotated close-up of a section of the Moon on Nov. 8th. – showing the play of shadows along the terminator. Visualizations by Ernie Wright / NASA’s Scientific Visualization Studio.

KREEP material likely originated in the late stage of a lunar magma ocean more than 4 billion years ago. KREEP-rich materials were found in rocks from each Apollo site, so scientists expected to find thorium (an element found with rare earths) all over the Moon. #NASAHalloween pic.twitter.com/TVIucamLVh

The Sun has 2 spots! AR2781, which is rotating into view on the Sun’s limb looks to be pretty large! 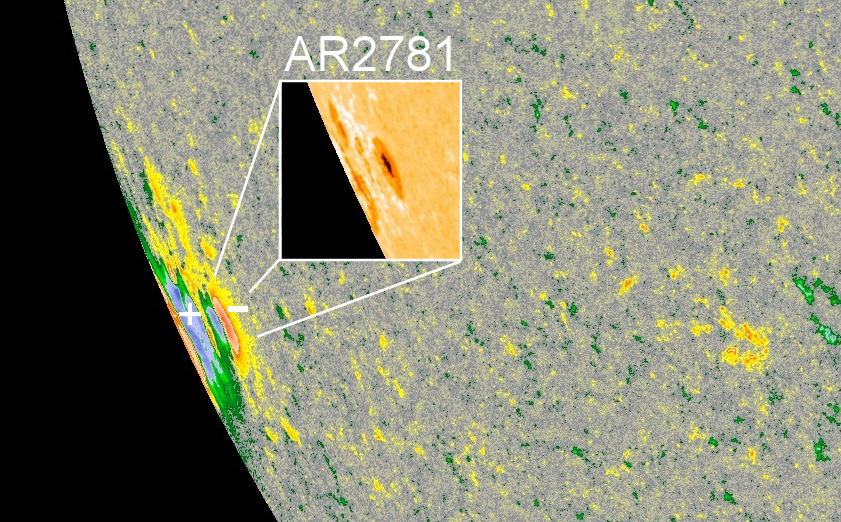 Sunspot AR2781 – polarity of the sunspot (+/-) marks it as a member of Solar Cycle 25. Images from NASA’s Solar Dynamics Observatory.

Sunspot AR2781 has a lot of coronal activity associated with it – you can see it in the lower left of the video below.

Lots of Prominence activity! That new sunspot is just crackling!

The SOLARACTIVITY PICTURE OF THE DAY for Tuesday, November 3rd, 2020 goes out to Jhon Henry Osorio Orozco for capturing this new, unnamed Active Region coming around the southeastern limb.

Our Wind mission launched 26 years ago today! This spacecraft orbits between the Sun and Earth, measuring the heated gas of charged particles that shapes near-Earth space and fills the space between the planets. https://t.co/fwNicarUCk pic.twitter.com/qztGXuxIQK 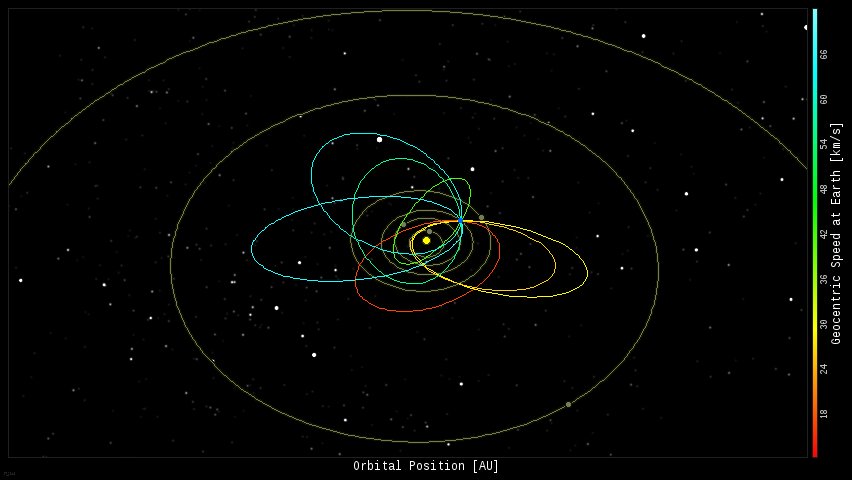 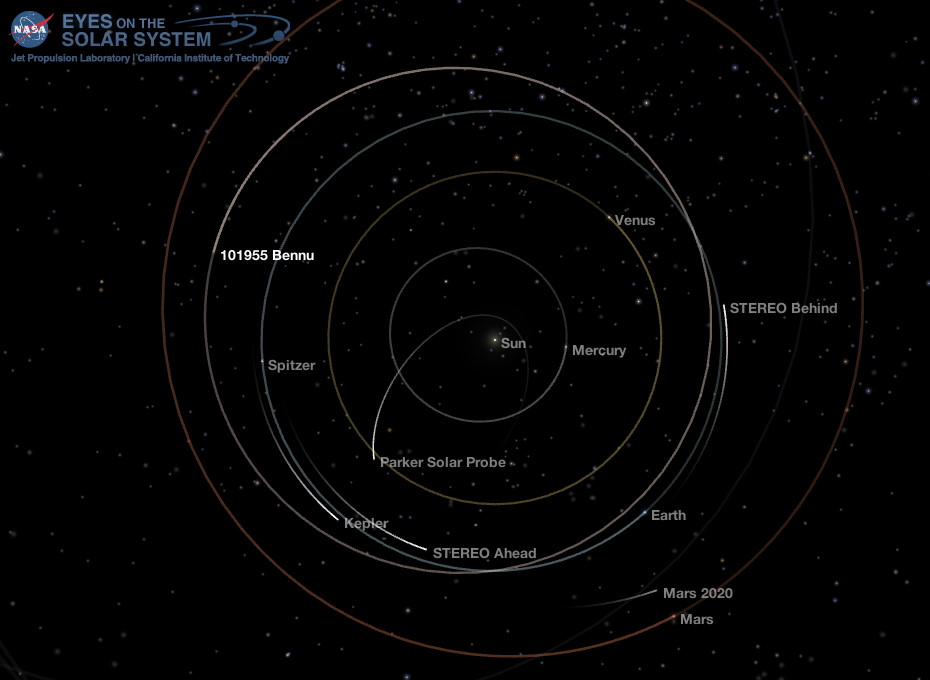 Position of the planets and a couple spacecraft in the inner solar system, 2020-11-03. Credit: NASA Eyes on the Solar System / Bob Trembley. 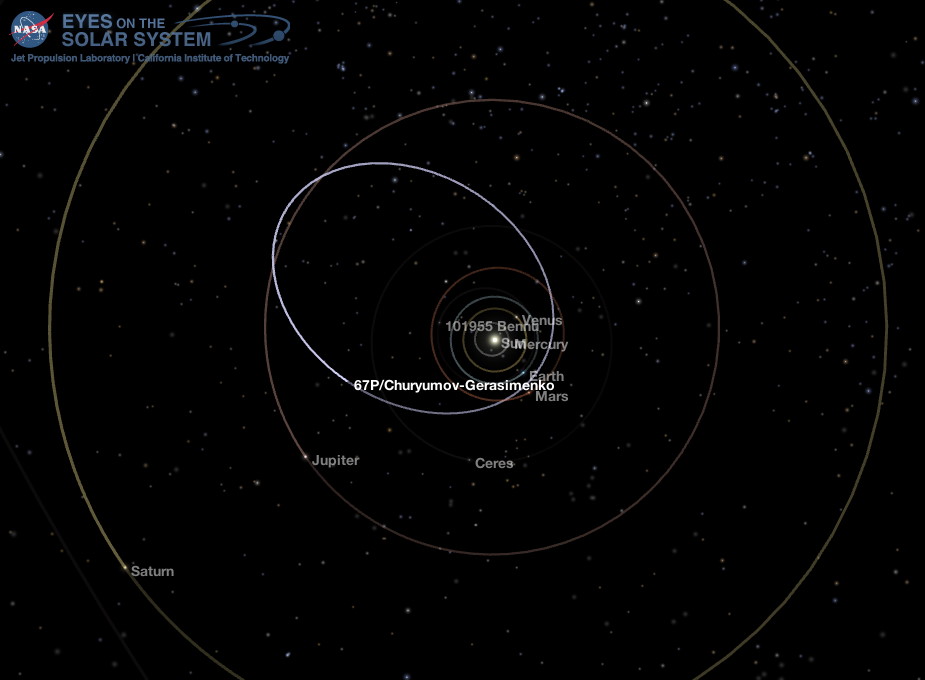 Position of the planets in the middle solar system, 2020-11-03 – the orbit of comet 67P is highlighted. Credit: NASA Eyes on the Solar System / Bob Trembley. 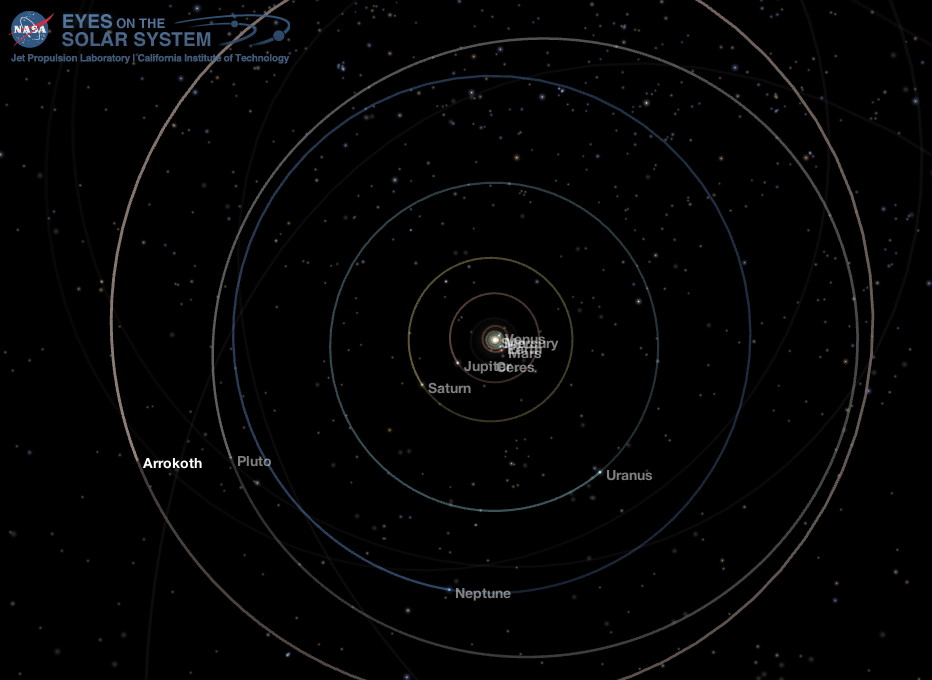 Position of the planets and some transneptunian objects in the outer solar system, 2020-11-03 – the orbit of TNO Arrokoth highlighted. Credit: NASA Eyes on the Solar System / Bob Trembley.

Jupiter & Saturn will be at their closest separation in the sky since 1623 at only 0.1° apart (that's 1/5th the size of the Moon in the sky). This happens on 21st Dec 2020, but before then you'll see Jupiter chase Saturn after sunset every night (made w/ https://t.co/Biw3kajWUt) pic.twitter.com/rzhOdyJNq7

Now that the sample is sealed up in the Sample Return Capsule, I can finally share this video from TAG!

This is the view from one of my navigation cameras… pretty intense, huh? #ToBennuAndBack

The capability to launch crewed spacecraft returned to America in 2020 for the first time in 9 years when NASA and @SpaceX's Demo-2 mission took flight. Millions watched as @AstroBehnken and @Astro_Doug flew on Crew Dragon Endeavour for the first #LaunchAmerica mission. pic.twitter.com/TFYcAAGzxP

Join #AstronautSnoopy in celebrating the 20th anniversary of humans living on the @Space_Station with these free curriculums for kids ages 4-11. Learn about the history and what it's like to live and work in space. Download now at https://t.co/ScDONjl3OO#SpaceStation20th pic.twitter.com/KP5IndvvwD

This observation targets a highly textured bedrock surface in northeastern Tyrrhena Terra. This location has a high probability of being a sedimentary deposit.

The Landsat mission observes crops from space, helping farmers put food on your dinner table. In this data sonification, see and hear how crops in the U.S. have changed over 20 years.
Listen and subscribe to @NASA’s Curious Universe podcast to learn more: https://t.co/5oHlVtyUdn pic.twitter.com/YSsrBTmhKk

For @NASAJPL’s Severine Fournier, studying our planet knows no borders. Rising seas affect everyone on Earth. That’s why NASA and international partners are launching a new satellite to continue studying our changing global ocean: https://t.co/KHVts2ulO7#SeeingTheSeas pic.twitter.com/rEMhumQrJJ

Exoplanets are far away and hard to see, especially next to much bigger and brighter stars. One way to spot them, though, is to look to their stars. An orbiting exoplanet can change the star's light. https://t.co/H05z2oDI03#MondayMotivation: Small acts can have a big effect. pic.twitter.com/e4PqBkT1yj

We are thrilled to announce more of our 2020 Global Conference speakers! Each of these individuals, from all over the globe, offers a unique perspective in the effort to protect the night.

Learn about them here: https://t.co/HUyKLr5rjn

Once upon a time, two spiral galaxies collided into each other and created the galaxy NGC 34, seen in this #HubbleFriday image.

NGC 34’s bright center is a result of the ongoing merger, which began a burst of new star formation and lit up surrounding gas: https://t.co/uphJdAfMoY pic.twitter.com/P1rBHifZuC

Continuing with my visual tour of nearby stars and their systems, we travel to the Gliese 412 (Lalande 21258) system, about 15 light years distant. 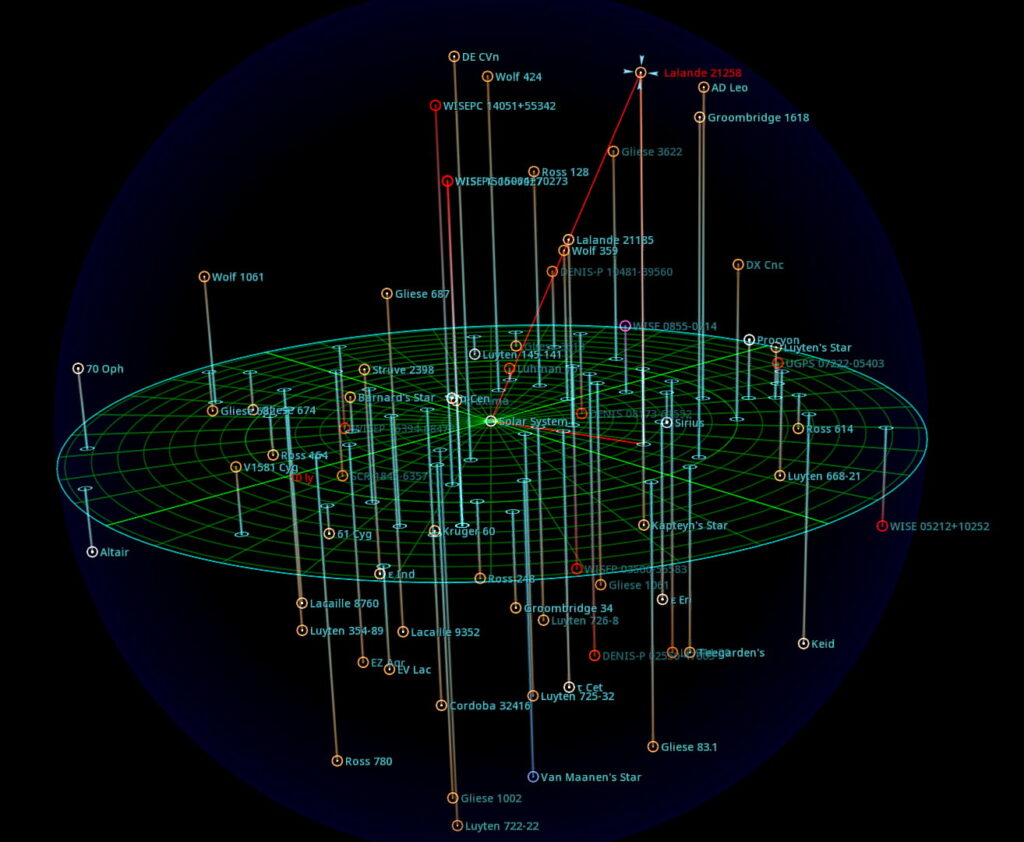 Gliese 412 is about 15.8 light years from Sol; the plane (green) is aligned with the orientation of the plane of the Milky Way galaxy. Credit: SpaceEngine / Bob Trembley.

Gliese 412 is a pair of stars that share a common proper motion through space and are thought to form a binary star system. The pair have an angular separation of 31.4″ at a position angle of 126.1°. They are located 15.8 light years distant from the Sun in the constellation Ursa Major. Both components are relatively dim red dwarf stars.

The two stellar components of this system have a projected separation of about 152 AU, and an estimated orbital semimajor axis of 190 AU. The primary has about 48% of the Sun’s mass, while the secondary is only 10%. The primary has a projected rotation velocity at the equator of less than 3 km/s; the secondary has a rotation velocity of 7.7±1.7 km/s.

The primary star was monitored for radial velocity (RV) variations caused by a Jupiter-mass companion in a short period orbit. It displayed no significant excess of RV variation that could be attributed to a planet. A search of the system using near-infrared speckle interferometry also failed to detect a companion orbiting at distances of 1–10 AU. Nor has a brown dwarf been detected orbiting within this system.

The space velocity components of this system are U = 141, V = –7 and W = 7. They are members of the halo population of the Milky Way galaxy.

The secondary is a flare star that is referred to as WX Ursae Majoris. It is characterized as a UV Ceti type variable star that displays infrequent increases in luminosity. This star was observed to flare as early as 1939 by the Dutch astronomer Adriaan van Maanen.

Component B (WX Ursae Majoris) has been identified as an X-ray source, while no significant X-ray emission was detected from component A. This system had not been studied in X-rays prior to ROSAT. The Gaia DR2 release gives a parallax of 204.059±0.169 mas for B, indicating a distance of around 16 ly. – Wikipedia 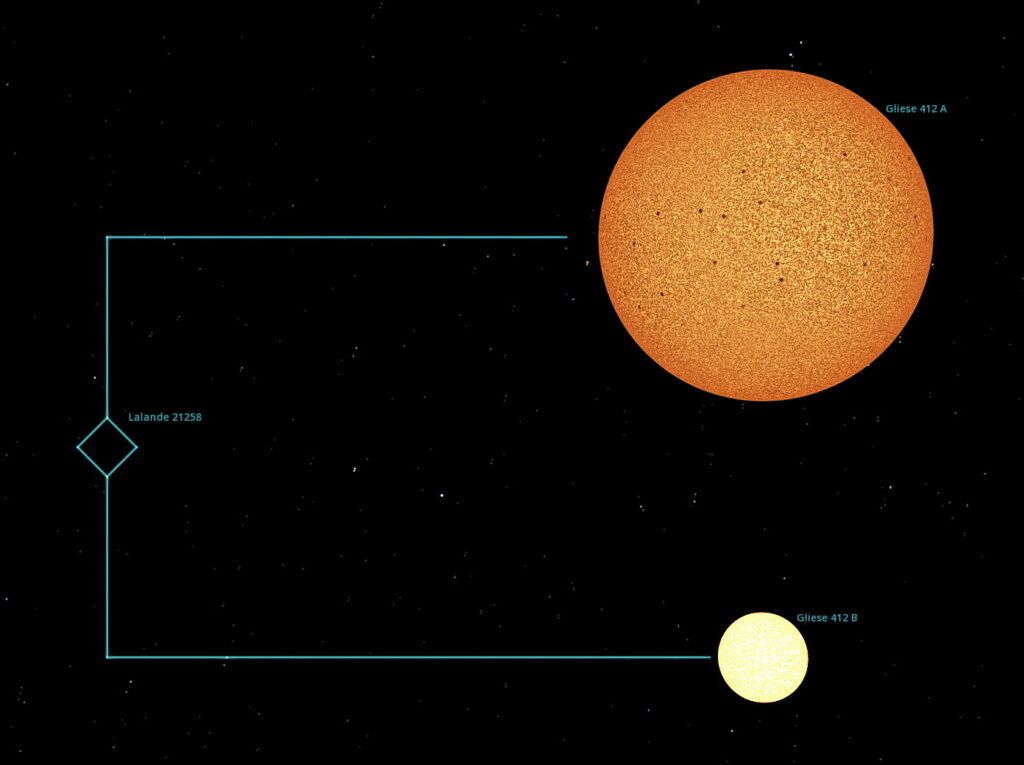 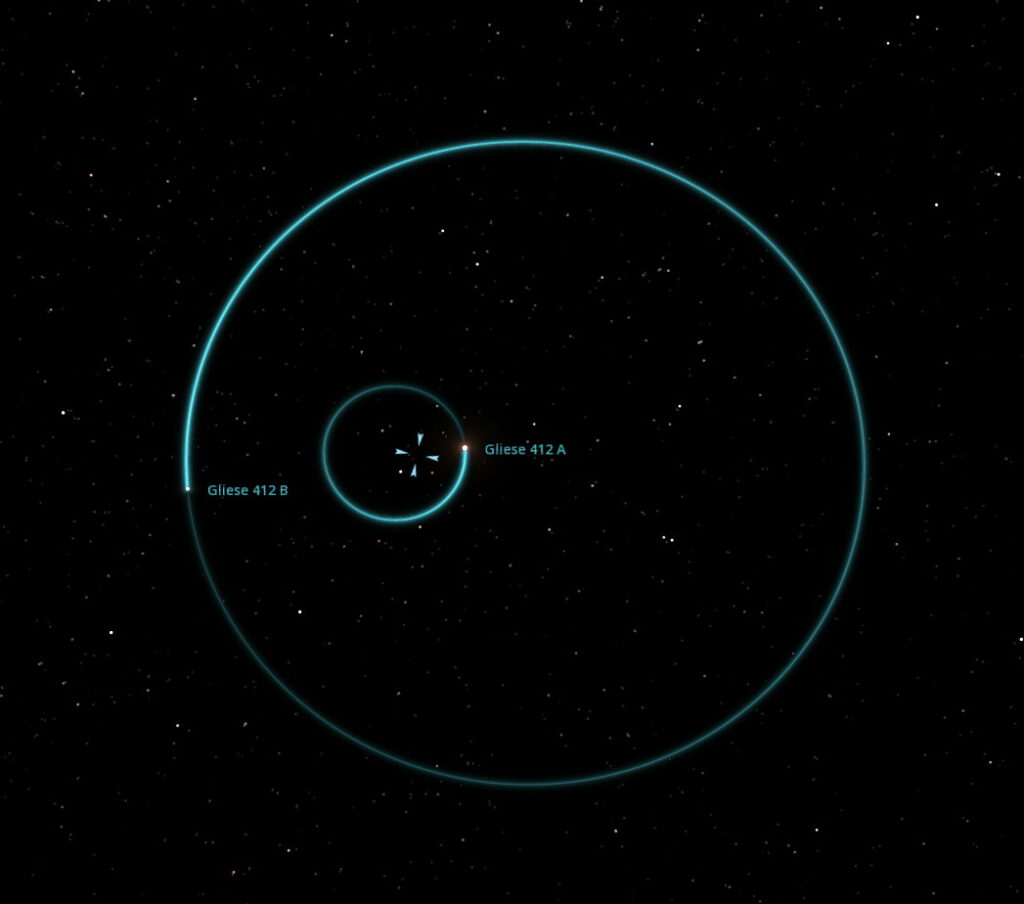 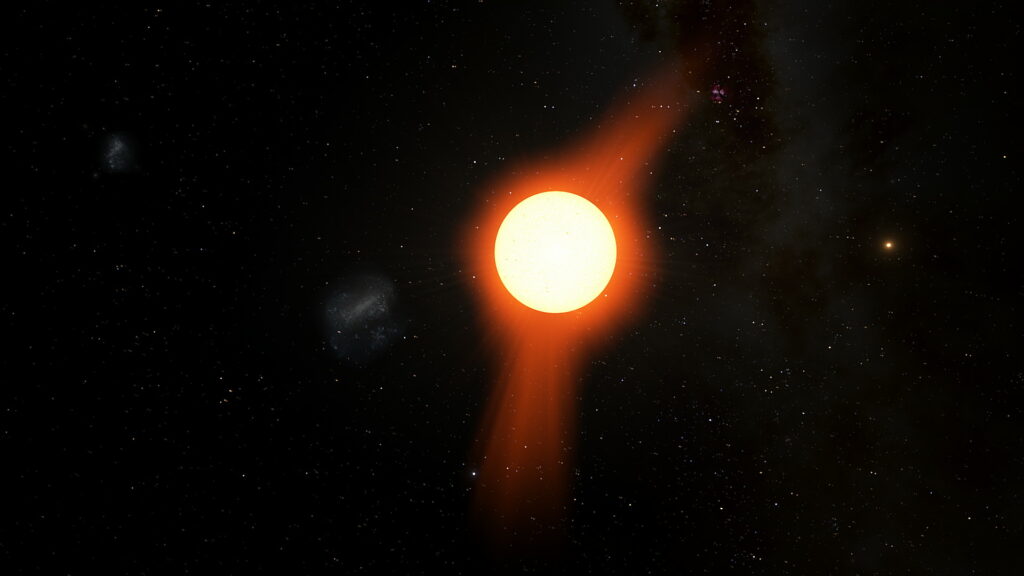 Artistic rendering of Gliese 412 B – Gliese 412 A is in the distance to the right. Credit: SpaceEngine / Bob Trembley.

Captured on Oct. 28, this imaging sequence shows NASA’s OSIRIS-REx spacecraft completing the final step of the sample stowage process: closing its SRC. To seal the SRC, the spacecraft closes the lid and then secures two internal latches. The sample of Bennu is now safely stored and ready for its journey to Earth.

The image sequence was captured by the StowCam camera. StowCam, a color imager, is one of three cameras comprising TAGCAMS (the Touch-and-Go Camera System), which is part of OSIRIS-REx’s guidance, navigation, and control system. TAGCAMS was designed, built and tested by Malin Space Science Systems; Lockheed Martin integrated TAGCAMS to the OSIRIS-REx spacecraft and operates TAGCAMS. Credit: NASA/Goddard/University of Arizona/Lockheed Martin