I was delighted when fellow blogger, Chris Graney, floated the idea of the two of us doing a “blog and response” for The Catholic Astronomer. Given our common interest in matters of ecology and care for creation, this challenge seemed to be a perfect fit. When reading Chris’s piece about the climate history of Prairie du Chien over the past 115 years, my first thought was of the fittingness of Chris’s choice of cities. Prairie du Chien is the city where the first parish in our diocese was established with a ministerial pre-history that goes back to the early Jesuit missionaries, Marquette and Joliet, in 1673.

My second thought took me back to my grade school science days, recalling the confident prediction from one of my teachers that, by the time I was in my 40’s, Wisconsin’s winters would be like Florida’s winters because of global warming. A few years ago, while shoveling the sidewalk at Roncalli Newman Parish on a chilling -10 morning, I had the thought, “Where is my promised global warming?” This moment also reminds me of a joke often shared about Wisconsin weather that simply states, “I hope summer falls on the weekend this year!”

All kidding aside, it is true that one of the challenges of climate science is that some of the presumptions of the past have not come about. However, just because some presumptions ended up in the intellectual boneyard doesn’t mean that climate change and global warming aren’t happening. Though I am not a scientist, I do believe that our climate is changing and that we need to better care for our common home. In that spirit, I want to dig into the data Chris provided to see how we can understand the climate of Prairie du Chien in relation to the debate on global climate change and global warming.

Instinctively, Chris’s piece reminded me of our family’s favorite “environmental periodical:” The Gurney Seed Catalog. Every February, my mother would leave the catalog on the kitchen table and ask my brothers and I to pick out the seeds we wanted to order for our garden in the spring. This yearly ritual often led to disappointment, since I always wanted to buy seeds for fruit that didn’t grow in our growing zone. My mother would turn to the growing zone map from the USDA to remind me, “We can only buy seeds for this zone!” Though the experimental gardener in me wanted to try to prove the map wrong, I always relented, feeling a little disappointment that we couldn’t have a banana tree in our backyard. 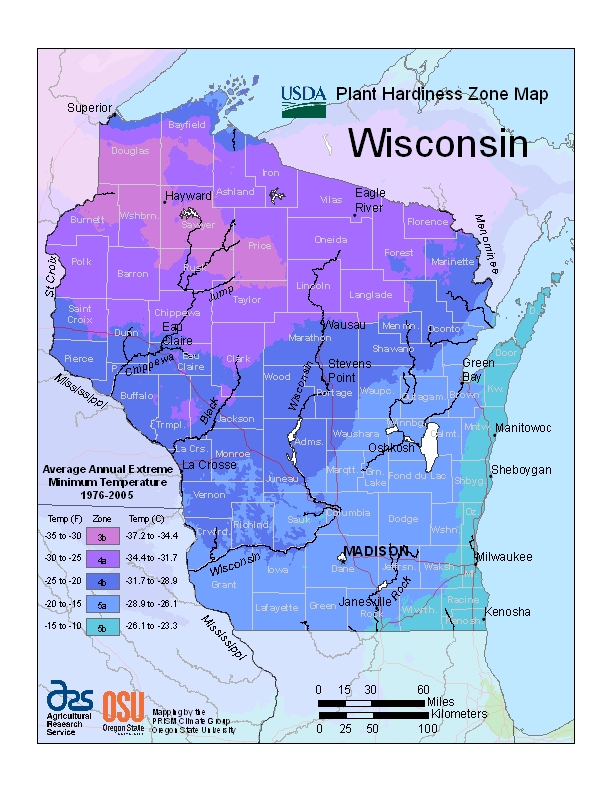 Now, some may see little significance to this increase, possibly gravitating toward the joke I would share with brother priests who serve in warmer climates, equating Wisconsin’s cold winters to Dante’s levels of hell in the Inferno: Once you’re in hell, does it really matter whether you are on level one or seven – or, in the case of Wisconsin, 5a or 4a? Further, this reality of slightly warmer lows in Wisconsin combined with cooler highs would be seen by many as a good thing, giving hope to those of us who would love to see banana trees in the badger state someday.

Again, all weather humor aside, what growing zone maps do show us is how small changes to our environment can make big differences on what type of plants can survive in particular climates. One of my students from UW-Stout with a deep passion for the environment shared an analogy on the relationship between temperature and illness in the human body. If our body temperature rises or drops a degree or two from 98.6, this indicates illness. Raise or lower the temperature a degree or two more and there is legitimate concern for a body that is approaching crisis.

For another take on seasonal lows, a good friend of mine shared an article with me about how rising low temperatures can impact the spread of different species that can pose a threat to the environment. In a piece from August 28th of this year, deep concern was raised over the potential broadening of one of the most destructive insects in the world, the southern pine beetle. The geographic range of this beetle is limited to a great extent by temperature lows. The higher the lows, the further range the beetle has, posing a greater threat to the health of woodlands. The research done by Corey Lesk and Co-author Radley Horton point to a challenging future ahead for woodlands in the northern United States if the trend of rising lows continues not only in Wisconsin, but throughout the northern United States.

Lesk and Horton project that by 2020, the beetles will establish themselves along the Atlantic coast up to Nova Scotia. They say that by 2050, 78 percent of the 48,000 square miles now occupied by pitch pine forests from southern Maine to eastern Ohio will have climates newly suitable to the beetles. By 2060, they expect the beetle will further establish itself from southern New England through Wisconsin, and by 2080, climates suitable for the beetle should reach 71 percent of red pines and 48 percent of jack pines, which extend across more than 270,000 square miles of the northeastern United States and southern Canada. (Climate may quickly drive forest-eating beetles north, says study. physics.org – Nature Climate Change, Columbia University)

What these examples show us is that looking at global temperature change is not only about high temperatures, but also low temperatures. Therefore, Chris’s observation about seasonal lows is critical when trying to understand how weather impacts Wisconsin’s ecosystem whether it be plant heartiness or pest infestations.

My next thought on Chris’s piece was how one set of date from a specific location cannot prove or disprove global warming. What needs to be examined is the climate picture created when we collect weather data globally. When looking at the current tracking of temperature by the National Oceanic and Atmospheric Administration (NOAA) we do find that 2017 is, to this point, cooler than 2016. Though this information may be music to the ears of those who deny climate change, this decrease of temperature still puts 2017 as the second warmest year on record. Time will tell if 2018 continues the downward trend of global temperature, which would be good news! Nevertheless, one of the challenging aspects of climate science in an American culture that yearns for immediacy is that climate science is based on measuring small changes over long periods of time. As a non-scientist, I am always struck with how climate science emerges as a fascinating balance between very small changes in our environment that can have major impacts upon our common home. 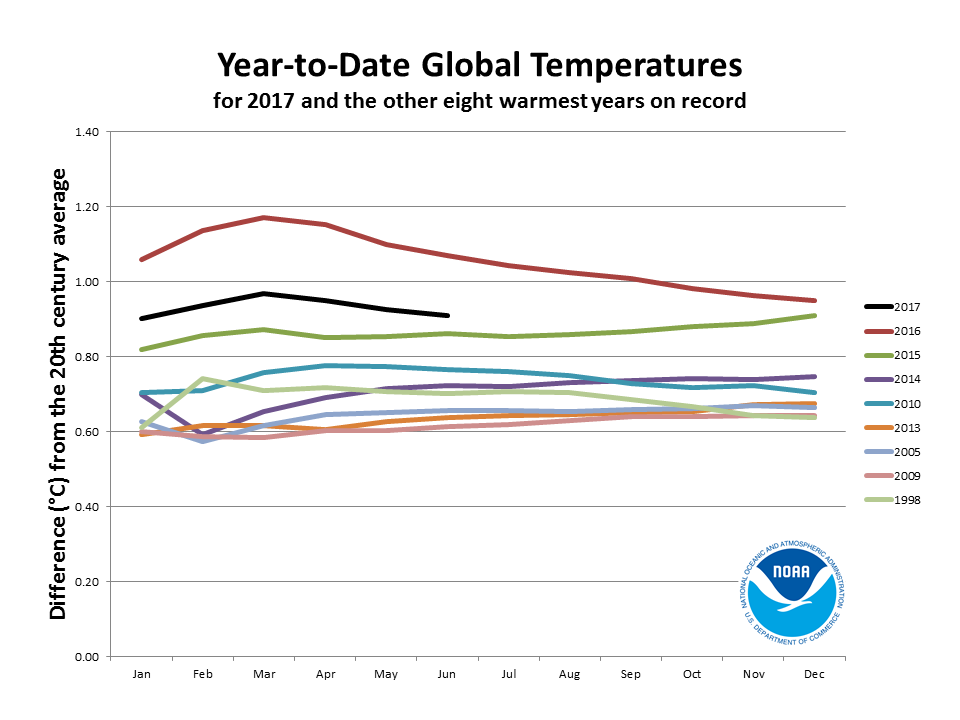 One of the environmental concerns I have reflected on with you in the past is the major changes we see occurring in the poles. When we look at the Arctic north and Antarctica to the south, one finds a rapidly changing environment for sea ice. Six months ago, NASA reported that as of March of this year, sea ice levels in the poles have reached their lowest levels since sea ice has been tracked. This trend shows us that, despite the global decrease in temperature for 2017, the impact of those temperatures is not uniform. One of the key benefits of sea ice at the poles is its ability to reflect sunlight, allowing for cooler temperatures. The less reflective ice there is, the more heat is absorbed by water, causing an increase in water temperature. This increase in water temperature can become fuel for larger, and more frequent hurricanes and typhoons.

There are many other things that came to mind when reading Chris’ piece, such as the rise of Carbon Dioxide levels in the Earth’s atmosphere. However, the data Chris presented was limited to temperature and precipitation, therefore I will refrain from drifting too far off topic. In short, even though we can learn fascinating things about a particular city in Wisconsin through studying particular climate data, the larger question of global warming can’t be confirmed or denied in light of such data. That being said, the 1901 summer from Gehenna and the 1960 winter from Dante’s Inferno in Wisconsin remind us of the complicated tapestry that is climate science. Given the complexities of this science, it is understandable that a sea of climate data can lead to very different conclusions.

This exercise also reminds me of a lesson learned from studying Sacred Scripture. One of our Scripture professors told us to be careful not to construct an entire biblical theology based on one passage of the Bible. Rather, we need to understand the rich tapestry of Scripture in its entirety along with its history, genre, type, morality, and spirituality. In a similar way, climate science requires patience to wade through multiple layers of climate data to give a clear picture of overall climate change globally. The beauty is that to do this well means we also need the particular data from Wisconsin and Kentucky. Therefore, Chris is right to grieve the loss of the United States Historical Climatology Network (USHCN) since it will remove essential data that helps us understand our common home regardless of one’s thoughts on global climate change. To borrow from the great Catholic “both and,” we need data on the micro level from the USHCN in order to understand the macro reality of global climate change.

Personally, I enjoyed this invitation to respond to Chris’s post. Every time I explore information on our common home, I come away feeling a deep sense of appreciation of the beauty, fragility, and intricacy of our good Earth. In a real way, these types of investigations, regardless of their outcome, helps inspire me to embrace the call to care for our common home regardless of the outcome of that exploration.