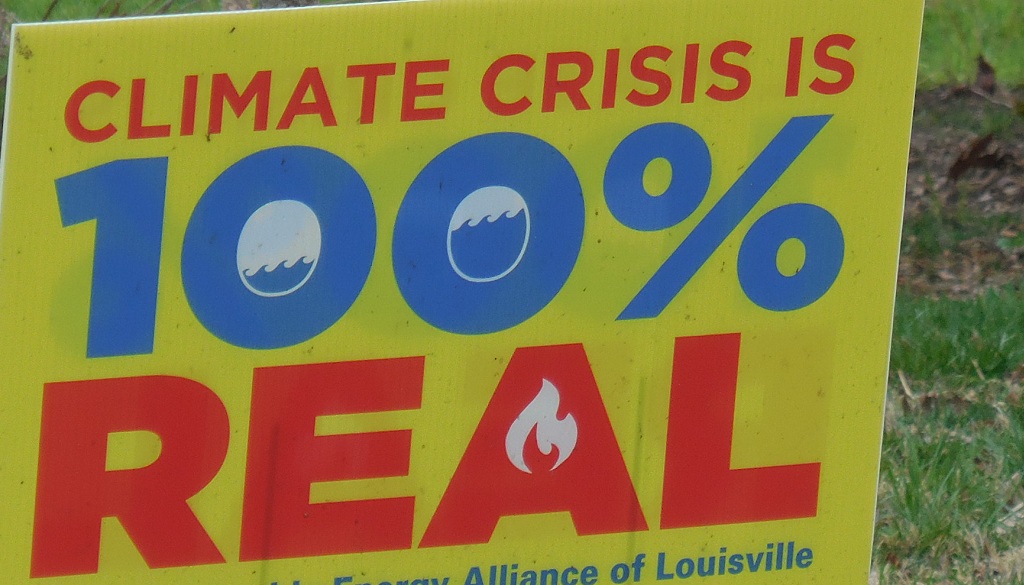 It seems our leaders are taking climate science seriously.  Since the start of 2021 the United States has rejoined the Paris climate accord and engaged in other climate-related actions.  USA Today reported last Thursday that “President Joe Biden pledged to cut U.S. greenhouse gas pollution in half by 2030″.

“Laudato si’, mi’ Signore” – “Praise be to you, my Lord”. In the words of this beautiful canticle, Saint Francis of Assisi reminds us that our common home is like a sister with whom we share our life and a beautiful mother who opens her arms to embrace us. “Praise be to you, my Lord, through our Sister, Mother Earth, who sustains and governs us, and who produces various fruit with coloured flowers and herbs”.

Biden remarked that “If you notice, the attitude of the American people toward greater impetus on focusing on climate change and doing something about it has increased across the board — Democrat, Republican, independent.”

Look around.  Behold the trash that fills out roadways and waterways.  We as individuals in the United States do not seem to be taking it seriously.  Environmental issues appear to be something we think only our government and industry leaders need to do something about.

There is no complicated science here.  The piles of litter you see in the photo above, and in the photos below, testify to many individual declarations of Laudato NO.

No, I am not going to bother with disposing of this item properly.

No, I am not going to concern myself with creating less stuff to be disposed of in the first place.

No, I am not going to insist that local leaders have and enforce competent and conscientious waste management programs.

At this point you may be saying, “wow Graney, those photos are indeed awful, but clearly they represent a local problem—clearly you have a local failure at the basics of waste management and enforcement of trash laws.”  There is truth in that.  Most of these photos were taken in my hometown of Louisville, Kentucky.  And I grant that the local government in Louisville has been in the national and international news over the past year, and not for good reasons.

But that failing at the basics serves to expose a reality.  If your locality is good at cleaning up its trash, that means you do not see how much trash exists.  The trash on the ground in Louisville did not get there on its own.  We put it there.

And Louisville is a progressive sort of place.  The party that supports the US being in the Paris accords has held the mayor’s office for more than five decades.  Local folks put up yard signs declaring the climate change problem.  This is not the sort of place where one gets points for scoffing at environmental concerns. 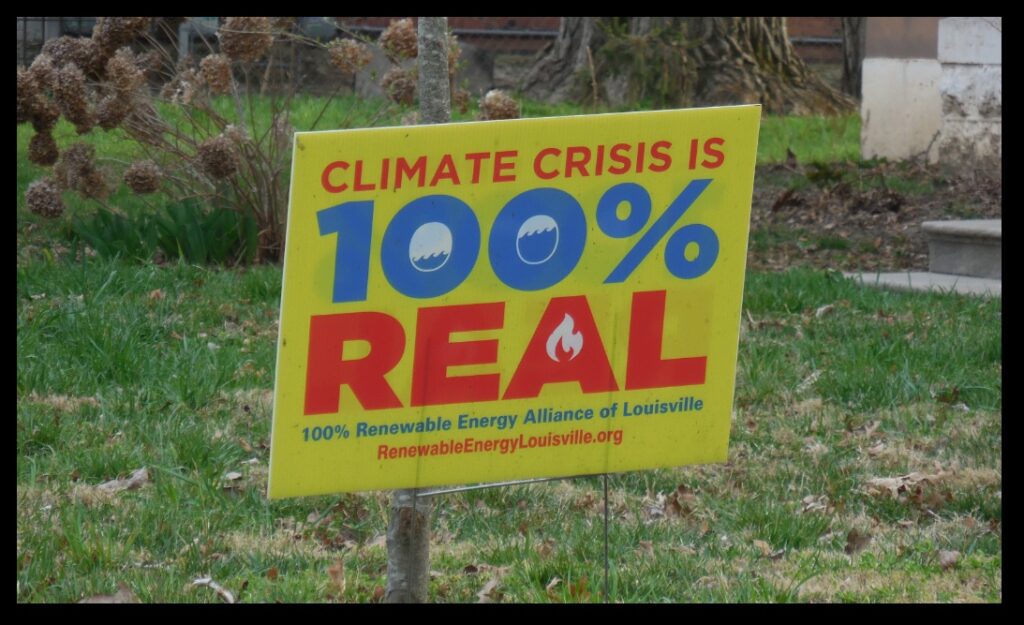 This sign is a few blocks down the street from the first photo above, and several blocks from the second.

But that does not change the fact of trash.  People lay down trash regardless of their politics.  Stated concern about the environment (climate change) often does not translate into individual action on the environment (trash).  The front yard can sport a climate change sign while the street or the back alley is full of take-out containers, discarded COVID-19 face masks, and old Amazon boxes and packing material.

Moreover, to Louisville’s defense, the trash in the Ohio River that you see in the photos below is coming to Louisville, not from it.  Those photos were taken on the Ohio right across from the downtown.  Louisville litter that gets washed into the river will be added to this; it will all head down to the Mississippi River, and out to the Gulf of Mexico, and some day lots of those plastic and foam take-out boxes will end up swirling around in the Atlantic Ocean.  You can find Laudato NO scenes just like the ones in these photos in many cities, and even in many rural areas, and that is why there is so much trash in the river at Louisville.

One example of Laudato NO stands out in my mind.  While hiking in the mountains near Denver a few years ago, my wife and I kept coming across plastic bags full of dog poop next to the trails.  At one point the contrast between the lovely Colorado mountain scenery and the “poop bag” sitting by the trail was enough to make me nab a photo. 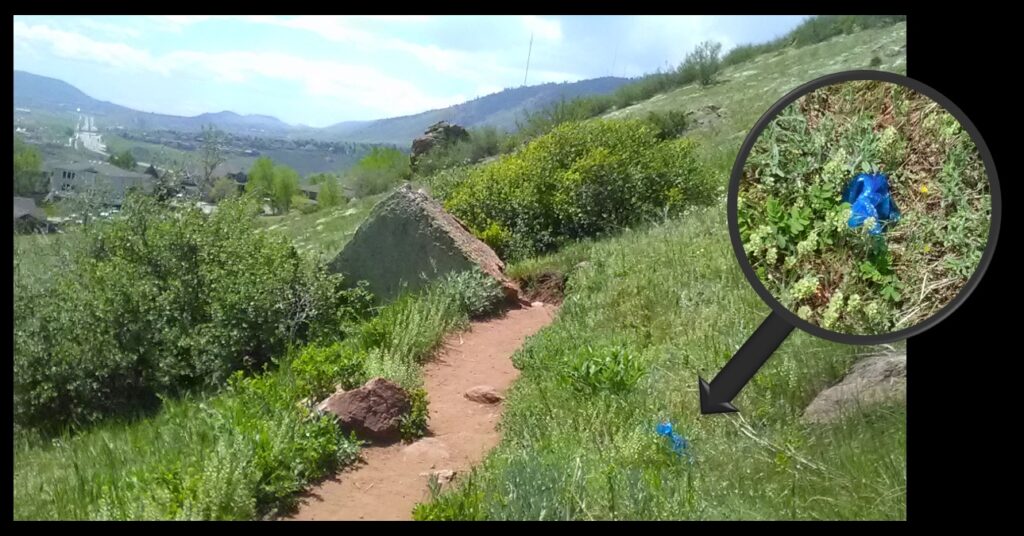 The bag on the Colorado mountain (arrowed, and inset).

Some trail user had gone through the motions of acknowledging the environmental science (that says pet waste is a problem): take a bag along on the hike; pick up the dog’s poop.  But then, rather than dispose of the waste properly, our trail user tossed it aside when the opportunity arose.  The result was dog poop along the mountain trail, plus a plastic bag.

It seems our Colorado hiker wanted to construct a myth—wanted to appear to be scientifically informed and environmentally conscious, but did not want the inconvenience of being so.  (This is, of course, not just a Colorado issue.  “Poop bags” discarded on the ground are a frequent occurrence in Louisville, too.)

So then, is the US indeed serious about climate science in rejoining the Paris accords?  Or are we just constructing a climate change myth about being concerned over the climate and paying attention to the science?  Perhaps we just want to appear to be scientifically informed and environmentally conscious, but we will toss the bag to the side of the trail the moment that this environment stuff conflicts with things we find more important.

Consider what we—either ourselves or through our leaders—ask individuals to do for the problem of climate change.  Open windows this summer and cut the air conditioning and carbon emissions?  (I hear better ventilation helps fight COVID-19.)  String up a clothes line and do some zero-carbon-emission laundry drying on sunny days?  Walk?  Bike?  Clean up trash?  Make less trash?  Develop homes and businesses and neighborhoods and schools that facilitate walking, biking, open windows, and less carbon emissions (and exercise and healthier people)?

It is not that we never ask for individual action in helping solve big problems.  For COVID-19, we have worn masks, kept social distance, and gone without seeing friends or hugging loved ones.  For the sake of the cause, some died alone; others have known that their loved ones died alone.  Young people in particular have sacrificed jobs, businesses, and educations to help fight a disease whose direct risk to their health has been slight.

Are we really taking climate science seriously if we have not asked for so much as a clothes line or a plastic bottle picked up from the side of the road?  Will we not bow out of the Paris accords or other climate-related commitments the next time our leadership changes?  Or when individuals feel a burden from those commitments?

Sure, maybe our industries will find a technological fix that will mean we do not have to do anything at all as individuals.  Maybe industry will develop super solar power, with super battery storage, all super cheap and creating super jobs, or something else super like that, so that addressing climate change need not concern us individually.  That would be sort of like if our medical system had found a chemical that eradicated COVID-19 just by being released into the air—a chemical that was added to gasoline so that our car tailpipes inoculated us all with us never having had to don even a single mask.

And maybe that technological fix will happen.  But that does not dissolve our climate change myth—the myth that our leaders, and we, are serious today about climate science and the environment.  There is plenty of trash lying around to testify to our Laudato NO attitude.  These photos testify to that.

I took the photos here at locations in Louisville ranging from the inner city to the outer suburbs to the river. Only some of the photos are here, and there was far more that could have been photographed. 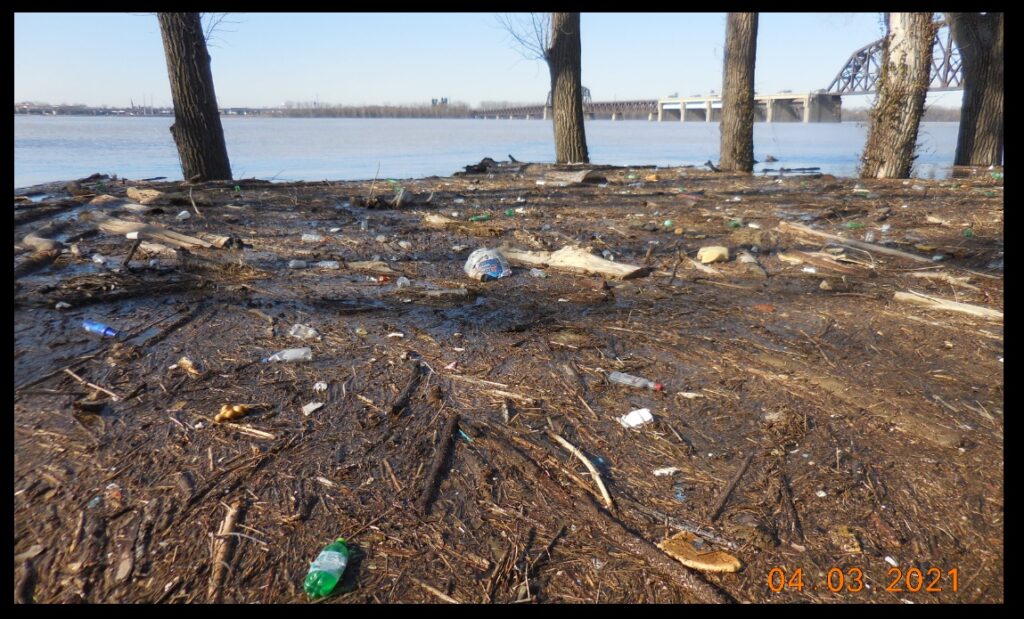 Remarkably, bald eagles can on occasion be seen resting in the tops of the riverside trees in this photo and the two below it. The Ohio River Valley is an amazing place, despite everything. In terms of industrial waste and untreated sewage, the river is far cleaner than it was fifty or seventy years ago. But the litter load that currently comes down it is incredible.

This stuff is on its way to the ocean.

Our food and drink waste comprises a very large portion of all the trash on the land. 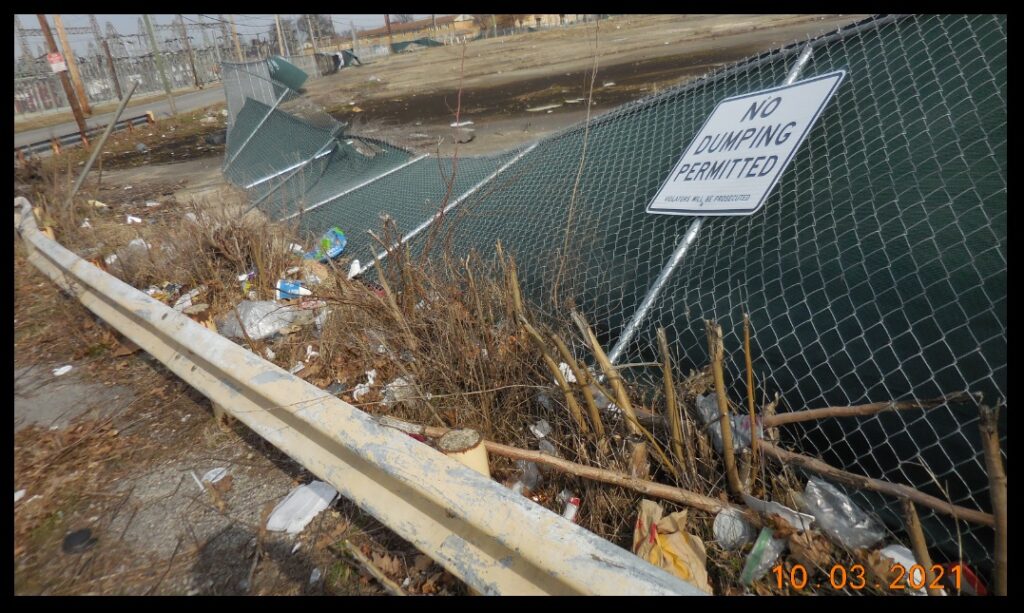 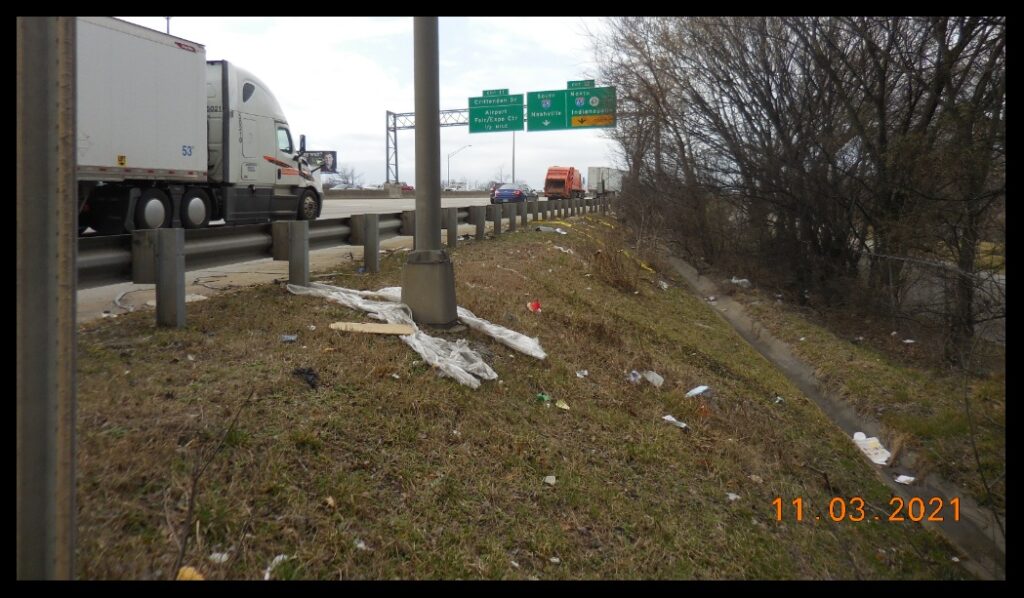 These two photos and the two below were taken on the location of the former, and once-famed, Bashford Manor horse farm. That was a very long time ago. 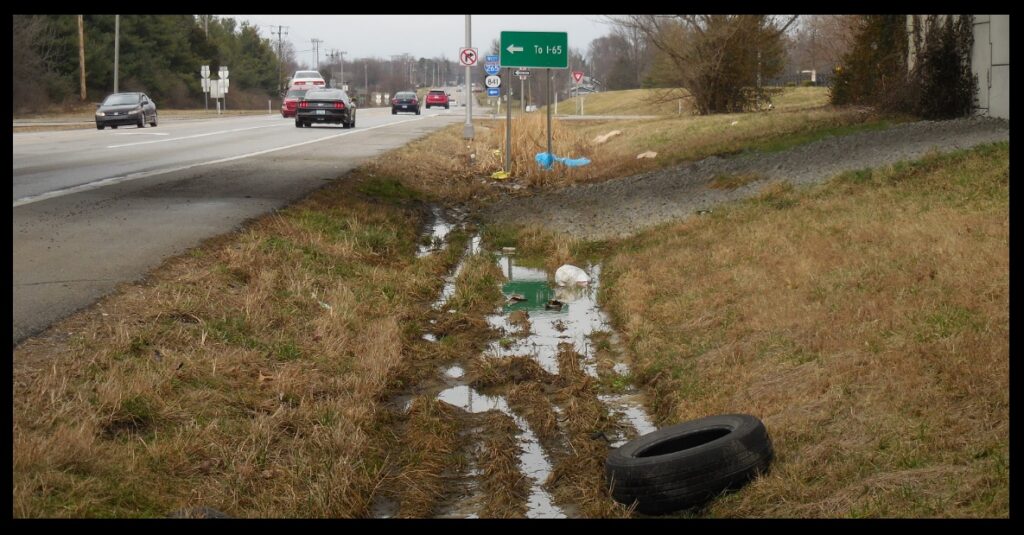 Cars stop when they get off the exit, and food containers go out the window.