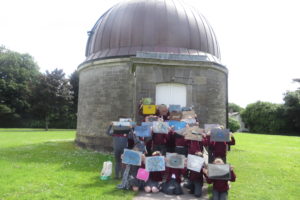 Earlier this year I designed a drawing workshop to highlight the many missions engaged with exploring Mars. I wanted children to experience the planet through the beautiful and extraordinary images taken by robotic explorers both on the surface and in orbit around the planet. The purpose of the workshop is to inspire children to see themselves as viable future explorers of our solar system via the many career choices and pathways available. The workshop uses drawing as an educational tool,a kinesthetic activity to embed new knowledge in a fun way.

The venue on this occasion was Dunsink Observatory Dublin, one of my much-loved places. Established in 1785 the building has the comfort feeling of a favourite chair. The observatory has a relaxed atmosphere while at the same time it is saturated with a rich historical past. Hamiltons ghost is said to wander within,perhaps he is in another dimension in wonder at how his quaternions have affected space exploration.

Boys and girls from Coill Dubh National School Co Kildare arrived with their teachers to attend the session. They excitedly took their seats for the presentation before the drawing began. It was fortuitous that NASA had just recently published a set of posters for use in education. The posters are retro in style each having a clear message to inspire all learners toward the future. I began the presentation using each of the projected posters as a window into Mars. Yes indeed we will need explorers for future Mars missions, yes indeed we will need farmers who can grow food in space. We will also need technicians and teachers with a strong sense of wonder to create the technology in order for humans to land on the planet and survive.

Most children in the room were aware of NASA however many blank faces met the mention of ESA. This is the norm unfortunately so I make a point of emphasising current ESA missions like ExoMars which is bound to make the worlds news services in October this year.

Each child in the room had the potential to be part of that journey,to be part of the thousands of humans whose efforts in various fields would be necessary toward an ambitious Martian base. At ten and eleven years old they could explore the planet through drawing. They could expand their knowledge and become aware of the extraordinary work carried out by both NASA and ESA . My homemade model of Mars delighted the children as they could touch Olympus Mons and put their fingers into Valles Marineris. With the help of one of the NASA posters we imagined abseiling into the valley.

Within the hour each child had produced a drawing of their choice. Impact craters with their ejecta rays were popular,so also were the ubiquitous dust devils. Victoria crater and sunset on Mars inspired many others.

After the workshop, I took the group over to the dome to show them the Grubb telescope. It was according to most of them,the biggest telescope they had ever seen. They queued up to see the South refractors almost 12 inch lens
(11.75 inches of beautiful glass) . The opportunity came to take a photo of their faces reflecting from this lens that has looked at the night sky for over 150 years. Hopefully the class from Coill Dubh NS will return some winter night to enjoy the views from this historic instrument.

It was poignant that after lunch on the lawn this eager class and their teachers were heading into Dublin to see some of Leonardo De Vinci’s drawings in the National Gallery. Leonardo’s works from 500 years ago,sketches that embody the value of drawing and observing.Leonardo maintained that an image transmitted knowledge more accurately and concisely than words. The boys and girls at the observatory drew things they had never heard of before that morning and in doing so their awareness of planetary features and current space exploration had begun.
A small selection of the drawings are in the slideshow above. The children were also shown how to see Mars in the night sky via Stellarium. Educational material supplied by NASA, ESA and ESO was provided for their classroom.