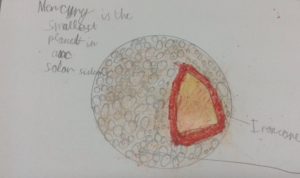 A drawing of Mercury by  young William Marczewska  of St Cronans Stargazers – Note Mercury has the more craters than other planets in our solar system.

On May 9th 2016 the tiny planet Mercury passed between our Earth and the sun.This rare event was viewed by about 150 children and their teachers at St Cronan’s National School in Bray Co Wicklow Ireland.  We were very lucky indeed to get a few good hours to share the event as the Irish weather can be very unforgiving to astronomers large or small.

The Transit of Mercury only occurs 13 times a century. Our event was for most people the first time and perhaps the only time they would see the planet.  Mercury is the smallest planet in our solar system , a bit bigger than our moon but a lot closer to the sun, a difficult target.

St Cronan’s Stargazers astronomy club was founded in 2010 and was from the start a club for parents and children learning together.  When we have an event such as an eclipse, a transit or even a  large active region,  we do our best to share it with the rest of the school.

The Stargazers shared this special transit with queues of children and their teachers. We had very special white light  filters for our telescopes to enable us to look safely at the sun and witness the tiny black dot of Mercury pass across the solar disc.  The transit had a seven hour duration for those with clear skies and the right equipment.

Three Irish artists have craters named after them on Mercury, William Butler Yeats (poet) Turlough O’Carolan (composer) and Wilhelmina Geddes (stain glass artist)  A small display of both Irish and International artists with craters named for them  was on show with transit educational material. The boys wondered who Dickens was , a few knew John Lennon had something to do with music. Most had heard of  Van Gogh, but not many small boys recognised Warhol. Curiosity was stimulated and many smiles were generated while learning  soaked in unnoticed.

Our two hour Mercury viewing was enhanced with the music of O’Carolan ,Bach, Lennon, Beethoven , and a dash of Vivaldi via my small blue tooth speaker. In a fantasy Mercury transit I would have a budget big enough to engage a live orchestra. They would have being  playing away in honour of the mercurial craters whizzing by us at a distance of 48 million miles. Soon enough the music was dulled by the chatter of children waiting to see the solar systems inner most planet.

Images of other artists with craters  on Mercury were on display –  Walt Disney, Charles Dickens, and Gustav Holtz to mention but a few. A quote from Salvador Dali caught the principals eye ” Have no fear of perfection , you’ll never reach it.”  Principal Tierney recounted to me that those guiding words were in direct alignment  with the Department of Education ethos of progression not perfection . On that day, children, parents and teachers all moved forward together in their understanding of our solar system. .

In preparation for the Mercury transit the children and parents learnt about the planet during our April meeting. The group became familiar with Mercury  by drawing the planet  and notating their drawings. Almost every meeting of the Stargazers involves drawing or making objects as an educational vehicle. Our little members come from across the class’s so are therefore different ages. Drawing helps everyone understand and move along at their own pace in their own way.

Ciaran Mulligan, James Hagan, Barbara and Chloe Connolly assisted Deirdre Kelleghan with the very special viewing . St Cronans Stargazers meet once a month at the school and do very interesting astronomy. The club are members of IFAS, i.e. The Irish Federation of Astronomical Societies , the only school under this  amateur umbrella of enthusiasts in the country .