This ought to make the folks at AsteroidDay ecstatic; I think I injured myself doing the dance-of-joy! After the Chelyabinsk impact event, I created a lecture about asteroids – what they are, how they formed, famous impact events, and the near total lack of any formal Planetary Defense plans in place. I was a pest to Br. Guy when I was writing this lecture – I asked him so many questions… I got so much good information!

The year after Chelyabinsk saw an increase in discussions about asteroids – with testimony given to Congress, at astronomical conferences, multiple online discussions, and an interview with Dr. Ed Lu of the B612 Foundation on 60 Minutes. This was great to see happening, and I had to update my asteroids lecture continuously, but there still wasn’t anyone saying “We acknowledge asteroid impacts are a threat, and we’re going to do something about them.”

Then came the creation of the AsteroidDay awareness campaign – which I immediately became involved with. I’ve been in contact with with Grigorij Richters, the founder of AsteroidDay, almost from its start; I gave my asteroids lecture at the Cranbrook Institute of Science last summer, as part of the first annual AsteroidDay event. Worldwide AsteroidDay events generated millions of hits on various social media sites.

Now, I have to update my asteroids lecture yet again. But this time, I’ll smile as I add “We’re finally doing something about them.”

NASA/JPL Press Release: 2016-007:
NASA has formalized its ongoing program for detecting and tracking near-Earth objects (NEOs) as the Planetary Defense Coordination Office (PDCO). The office remains within NASA’s Planetary Science Division, in the agency’s Science Mission Directorate in Washington. The office will be responsible for supervision of all NASA-funded projects to find and characterize asteroids and comets that pass near Earth’s orbit around the sun. It will also take a leading role in coordinating interagency and intergovernmental efforts in response to any potential impact threats.

More than 13,500 near-Earth objects of all sizes have been discovered to date — more than 95 percent of them since NASA-funded surveys began in 1998. About 1,500 NEOs are now detected each year.

Updated daily, this image shows a map of the inner solar system, and the positions of thousands of known asteroids. Credit: Scott Manley, Armagh Observatory.

“Asteroid detection, tracking and defense of our planet is something that NASA, its interagency partners, and the global community take very seriously,” said John Grunsfeld, associate administrator for NASA’s Science Mission Directorate in Washington. “While there are no known impact threats at this time, the 2013 Chelyabinsk super-fireball and the recent ‘Halloween Asteroid’ close approach remind us of why we need to remain vigilant and keep our eyes to the sky.”

NASA has been engaged in worldwide planning for planetary defense for some time, and this office will improve and expand on those efforts, working with the Federal Emergency Management Agency (FEMA) and other federal agencies and departments.

In addition to detecting and tracking potentially hazardous objects, the office will issue notices of close passes and warnings of any detected potential impacts, based on credible science data. The office also will continue to assist with coordination across the U.S. government, participating in the planning for response to an actual impact threat, working in conjunction with FEMA, the Department of Defense, other U.S. agencies and international counterparts.

“The formal establishment of the Planetary Defense Coordination Office makes it evident that the agency is committed to perform a leadership role in national and international efforts for detection of these natural impact hazards, and to be engaged in planning if there is a need for planetary defense,” said Lindley Johnson, longtime NEO program executive and now lead program executive for the office, with the title of Planetary Defense Officer.

Astronomers detect near-Earth objects using ground-based telescopes around the world as well as NASA’s space-based NEOWISE infrared telescope. Tracking data are provided to a global database maintained by the Minor Planet Center, sanctioned by the International Astronomical Union. Once detected, orbits are precisely predicted and monitored by the Center for NEO Studies (CNEOS) at NASA’s Jet Propulsion Laboratory in Pasadena, California. Select NEOs are further characterized by assets such as NASA’s InfraRed Telescope Facility, Spitzer Space Telescope and interplanetary radars operated by NASA and the National Science Foundation. Such efforts are coordinated and funded by NASA’s longtime NEO Observations Program, which will continue as a research program under the office.

The Planetary Defense Coordination Office is being applauded by the National Science Foundation (NSF), which supports research and education in science and engineering. “NSF welcomes the increased visibility afforded to this critical activity,” said Nigel Sharp, program director in the agency’s Division of Astronomical Sciences. “We look forward to continuing the fruitful collaboration across the agencies to bring all of our resources — both ground-based and space-based — to the study of this important problem.”

With more than 90 percent of NEOs larger than 3,000 feet (1 kilometer) already discovered, NASA is now focused on finding objects that are slightly bigger than a football field — 450 feet (140 meters) or larger. In 2005, NASA was tasked with finding 90 percent of this class of NEOs by the end of 2020. NASA-funded surveys have detected an estimated 25 percent of these mid-sized but still potentially hazardous objects to date.

NASA’s long-term planetary defense goals include developing technology and techniques for deflecting or redirecting objects that are determined to be on an impact course with Earth. NASA’s Asteroid Redirect Mission concept would demonstrate the effectiveness of the gravity tractor method of planetary defense, using the mass of another object to pull an asteroid slightly from its original orbital path. The joint NASA-European Space Agency Asteroid Impact and Deflection Assessment (AIDA) mission concept, if pursued, would demonstrate an impact deflection method of planetary defense.

Even if intervention is not possible, NASA would provide expert input to FEMA about impact timing, location and effects to inform emergency response operations. In turn, FEMA would handle the preparations and response planning related to the consequences of atmospheric entry or impact to U.S. communities.

“FEMA is dedicated to protecting against all hazards, and the launch of the coordination office will ensure early detection and warning capability, and will further enhance FEMA’s collaborative relationship with NASA,” said FEMA Administrator Craig Fugate.

The concept of a central office to coordinate asteroid detection and mitigation has been under consideration since 2010, when an Ad-Hoc Task Force on Planetary Defense of the NASA Advisory Council recommended that NASA “organize for effective action on planetary defense and prepare to respond to impact threats,” and should “lead U.S. planetary defense efforts in national and international forums.” In addition, a NASA Office of Inspector General 2014 report concluded that the NEO Observations Program would be more “efficient, effective and transparent” if it were organized and managed in accordance with standard NASA research program requirements.

The NEO Observations Program operated on a budget of $4 million as recently as fiscal year 2010. That same year, the President announced a new goal for NASA — a human mission to an asteroid. The President’s fiscal year 2012 budget included, and Congress appropriated, $20.4 million for an expanded NASA NEO Observations Program. The agency’s Asteroid Grand Challenge to find all asteroid threats also launched in 2012. Funding for the NEO program doubled to $40 million in 2014, which increased the rate of detection of new NEOs by 40 percent and jump-started research into potential asteroid deflection techniques.

The recently passed federal budget for fiscal year 2016 includes $50 million for NEO observations and planetary defense, representing a more than ten-fold increase since the beginning of the current administration.

For regular updates on passing asteroids, NASA has an asteroid widget that lists the next five close approaches to Earth; it links to the CNEOS website with a complete list of recent and upcoming close approaches, as well as all other data on the orbits of known NEOs, so scientists and members of the media and public can track information on known objects. 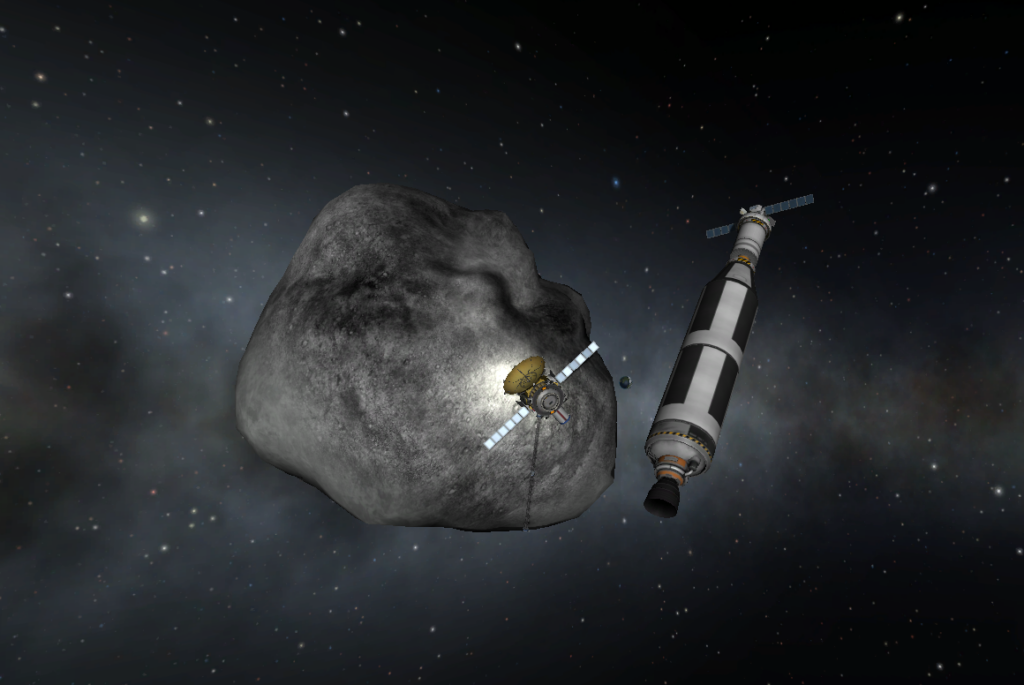 An asteroid, safely deflected in Kerbal Space Program sim. I left a probe core with a docking port grappled to the asteroid, for a future mining mission.