Have you heard the news about the UFOs and the Navy pilots?  It has been covered by a variety of media outlets.  Years ago there existed a cheesy tabloid newspaper called the Weekly World News.  You could find copies for sale in the check-out lanes of grocery stores.  The front page of the WWN always featured some sort of bizarre story about half-human/half-bat creatures, or Bigfoot, or (of course) UFOs and Space Aliens.  The WWN is gone from the checkout lanes, but today it is the major news outlets that are providing coverage of UFOs and Space Aliens.

The UFO coverage relates to U.S. Navy pilots who have reported encountering objects shaped like “Tic Tac” candies, but large (up to 40 feet long).  The Tic Tacs reportedly fly about and perform all sorts of incredible aerial maneuvers.   Just recently the Navy confirmed that certain video clips related to these reports (video clips that have been banging around the internet for a while now) are “real”. 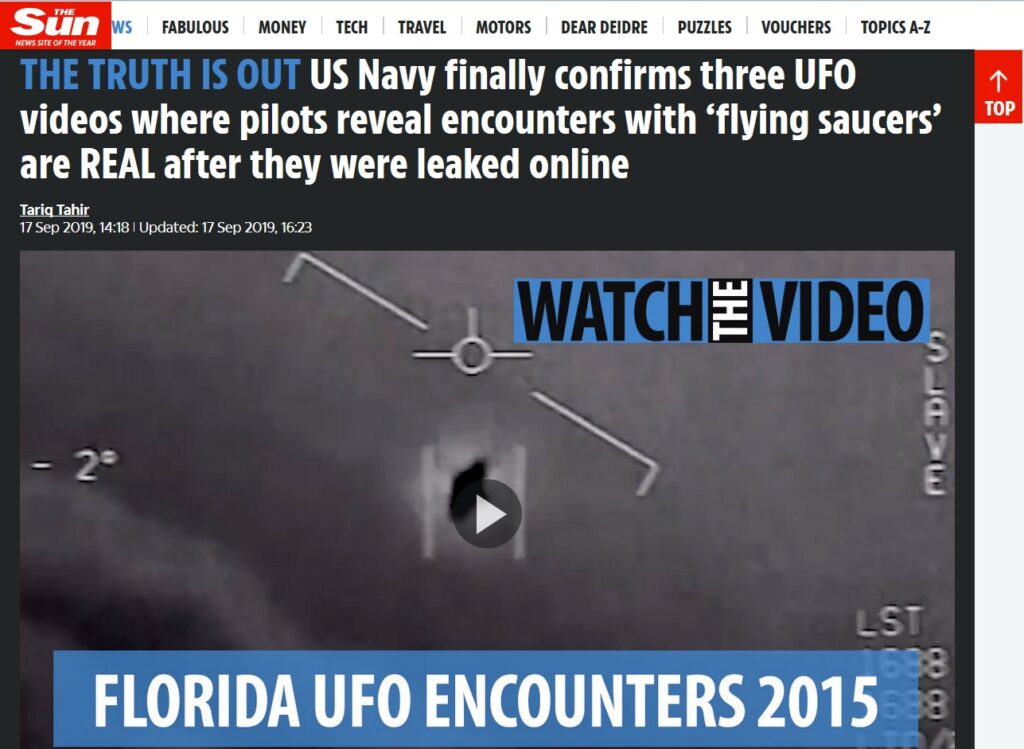 The New York Times has published stories about the Tic Tacs over the past few years.  The Times stories contain discussion of the Tic Tacs “accelerating to hypersonic speed [over five times the speed of sound—that is, over ~3800 mph/6200 kph], making sudden stops and instantaneous turns”.  Sometimes the objects were visible to radar and infrared sensors, but not visible through a pilot’s helmet camera, while other times pilots report having seen the objects, and even having nearly collided with them.  The Times stories also describe the objects as having “no visible engine or infrared exhaust plumes”, and no “wings or rotors”.  NPR reported that one of the objects “flew faster than [the Navy’s] F/A-18 fighter jets but left no detectable turbulence”.  The Times and NPR have not been alone in reporting on the UFOs: Popular Mechanics, the Huffington Post, CNN, Time, the Washington Post , CBS, and NBC have covered them, too—and have covered the fact that the Navy takes these UFO reports seriously, and wants pilots to report these sorts of encounters (rather than keeping mum about them for fear of damaging their reputations).

But as thunder follows lightning, and as smoke follows fire, Space Aliens follow UFOs.  And so it is here.  The New York Times makes certain to state that “experts caution that earthly explanations often exist for such incidents, and that not knowing the explanation does not mean that the event has interstellar origins”.  The Times cites Leon Golub, a senior astrophysicist at the Harvard-Smithsonian Center for Astrophysics, as saying that “the possibility of an extraterrestrial cause ‘is so unlikely that it competes with many other low-probability but more mundane explanations’”.  And they note that “no one in the Defense Department is saying that the objects were extraterrestrial, and experts emphasize that earthly explanations can generally be found for such incidents”.  But the Times is still making plenty of mention of Space Aliens.

Others embrace the Space Alien connection without reserve.  Luis Elizondo—who, according to the Times, was a military intelligence official who ran “the Pentagon’s shadowy, little-known Advanced Aerospace Threat Identification Program, which analyzed the radar data, video footage and accounts” from the Navy until he resigned in 2017—told CNN that “my personal belief is that there is very compelling evidence that we may not be alone”.  Scott Simon, writing for NPR in a piece called “We May Not Be Alone”, offers that the implications of the Tic Tacs “may be staggering”, and mentions movie Space Aliens: Gort, the Klingons, E.T. and Chewbacca.  The Washington Post quotes one of the pilots who encountered the Tic Tacs as saying that they are “something not from the Earth”.  And of course you can find plenty on the internet that goes much further, if you search a bit.

I recommend you abstain from that searching, for you will no doubt find stuff that makes the Weekly World News look tame.  O Readers of Sacred Space Astronomy, we need a Reality Check here!  There will be no Reality Check from the major media, apparently, so it looks like this is a job for your friendly neighborhood Vatican Observatory—Catholic Astronomer—Sacred Space Astronomy blogger.  So consider this idea:

THE TIC TACS ARE MAGICAL!

Yes, those 40-foot long Tic Tacs that have no engines, no exhaust, no infrared plumes—that can travel hypersonically, stop suddenly, turn instantly, and that can accelerate, in the words of one pilot, “like nothing I’ve ever seen”—that even create no turbulence despite outrunning an F/A-18—those are magical aircraft.  Things that are magical are not bound by the laws of physics.  Harry Potter’s broom is an aircraft that is not bound by the laws of physics.  It is magical.

But things that are not magical are bound by the laws of physics.  To accelerate a non-magical aircraft forward requires a force on that craft: acceleration = force/mass.  To make an instantaneous turn requires a particularly large force.  In common experience, objects make instantaneous turns when they hit some massive object; for example, when a ball strikes a solid wall or the hard ground.  A ball bouncing off a solid surface makes an instantaneous turn, and is subjected to a tremendous force in the process.  But non-magical craft tend not to survive collisions with solid surfaces.  Thus non-magical craft will not make instantaneous turns.  Moreover, to have a force on the aircraft implies another equal force on a different body: for every action there is an equal and opposite reaction.  Thus to push an aircraft forward or to turn it instantaneously requires that something receive an equal and opposite push—thus, exhaust, or rotor wash, or some similar disturbing of the environment near the craft.  And, an aircraft passing through the air displaces the air, and an aircraft passing through the air at high speed generates turbulence.  Non-magical aircraft cannot get around the laws of physics.

Suppose that we argue that the UFOs must operate on some super-duper technology that involves principles of physics that our science has not yet discovered—principles that negate the principles of acceleration and force described above.  Well, that is the same thing as arguing that the UFOs must operate on magic.  Of course we cannot prove that there are no undiscovered principles of physics and super-duper technologies out there that render possible that which is impossible, and that explain the flight of the Tic Tacs.  But that same argument can be applied to Harry Potter’s broom.  We cannot prove that there is no magic.  Once we leave what is scientifically known, we leave what is scientifically known.  In either case, Harry Potter’s broom or super-duper technology, we are talking about magic.

So the Tic Tacs, if they are objects, are essentially magical.  Given this, we have to then ask, who made them?  Who flies them?  Why, magical creatures, of course.  Obviously Space Aliens with magical super-duper technology are the perennial “we are not alone” favorite for this sort of thing, but let us be logical here.  These events involve the Navy, so would not magical sea creatures be a more logical conclusion than extraterrestrials?  Why not conclude that the Tic Tacs are the craft of Mermaids, rather than of Space Aliens?  Science and history have both shown us that the idea of a universe populated by Space Aliens, like we see in Star Wars, is an idea that just has not worked out (click here for a full discussion of this).  Over the centuries we scientists have consistently supposed that extraterrestrials existed in various places (the sun, the moon, Mars); we have consistently supposed that other planets would be more or less like Earth; and we have consistently been wrong.  Science has shown us that other planets tend not to be much like Earth, other planetary systems tend not to be much like our solar system.  We are recognizing today that habitable planets might not be so common.  But the Earth, and its oceans, are habitable.  No doubt about it. 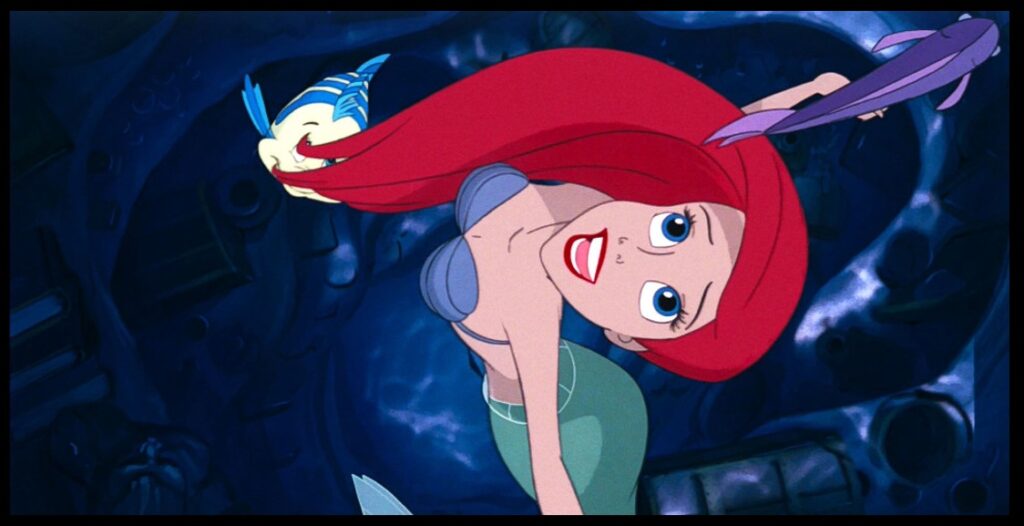 Thus Mermaids flying Tic Tacs are far more scientifically plausible than Space Aliens flying Tic Tacs: the ocean is habitable; Mermaids do not have to traverse the unimaginable vastness of interstellar space to get here.  And there is still further logic to suggest that the UFOs are the products of Mermaids rather than Space Aliens:  Why would Space Aliens traverse the interstellar vastness just to bug Navy pilots?  By contrast, we can easily imagine why Mermaids would be harassing the Navy.  They are sick of the sonar, sick of the trash in the ocean, sick of the over-fishing, sick of the ships going hither and yon.  Unlike Ariel, they do not want to be part of our world.  No doubt the Mermaids have decided that it is time to build some magical Tic Tacs and show the surface people’s military their Mer-power!

That is our Reality Check.

So why do you suppose the media never make mention of Mermaids?  Perhaps because thinking of the UFOs in terms of Mermaids exposes the absurdity of magical thinking—our Reality Check shows how unReal the “Space Aliens” coverage of the Tic Tacs has been.  Yet, it is culturally acceptable to think of magical UFOs if Space Aliens are involved—so acceptable that it is found widely in the media, and not just in the Weekly World News.  But, speaking scientifically and logically, that magical thinking about Space Aliens is even more absurd in this case than is magical thinking about Mermaids.

The absurdity of the media’s mentioning of Space Aliens does not mean that the topic of the Tic Tac UFOs is itself absurd.  The Navy pilots are detecting something.  The Navy clearly wants pilots to report this stuff, and not to just keep quiet about it out of fear of having to hear “Men in Black” jokes for the rest of their lives.  The Navy is encouraging pilots to report any “unidentified aerial phenomenon” (a far better term than “unidentified flying object” or “UFO”) they may see.  There are plenty of non-magical explanations for these phenomena.  Harvard’s Golub listed some for the Times: “bugs in the code for the imaging and display systems, atmospheric effects and reflections, neurological overload from multiple inputs during high-speed flight”.  Perhaps more worrisome than bugs in the code is the possibility that some folks have figured out how to hack their way into the code so as to play games with the pilots.  Any of these more mundane explanations might be of genuine concern to the Navy, sufficient to prompt it to encourage pilots to report any strange things they see.

And none of these require the existence of magical aircraft.  Or Mermaids.  Or Space Aliens.  Or anything else that would have been right at home in the Weekly World News.

And to be clear for the record, I am not seriously advocating The Mermaid Magical UFO Hypothesis.  (I would hate to see some headline that says we are advocating for the existence of Mermaids flying UFOs here at Sacred Space Astronomy.)