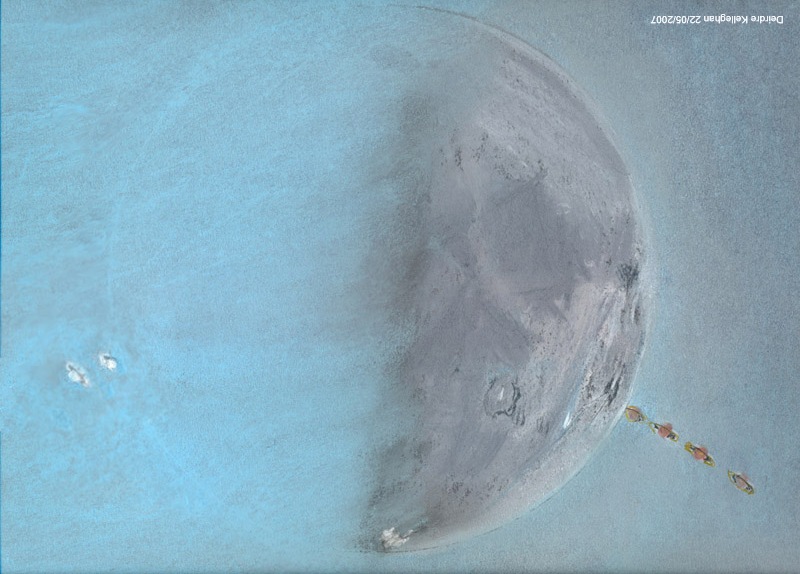 On the evening of May 22nd 2007 the beautiful blue sky was host to a first quarter moon. The evening was to bring me one of the most visually rich observations in my drawing odyssey . When I set up my dob I really wasn’t expecting to  catch a glimpse of Saturn in a daylight sky. The software gave me an idea of where the planet was, I scanned the area in the hope of finding it. My task was to see Saturn before it went behind the unlit quarter of the moon. In my first look there it was, the white ringed planet, one billion miles away in space. Saturn was there in my eye, embedded softly in the azure sky moving swiftly toward  the invisible limb of the moon.  Nothing could have prepared me for that  revelation, it was a totally different experience to seeing Saturn in a dark night sky.

My drawing paper was hastily endowed in blue pastel, a subtle outline of the lunar disc was inscribed on top. Somehow I just had to try to capture this  planet in the daytime sky. The gap between the planet and the rings was clearly visible,  I drew  very quickly.  My eye waited to see when she would appear to disappear behind the hidden moon. Minutes later I observed the planet begin to lose its leading rings as the moon occulted her.  That moment  had to be sketched,  as I continued to  observe she began to glide behind the lunar orb.

Gershwin’s magnificent Rhapsody in Blue was playing in my mind. The opening clarinet glissando  musically describes the entrance  of Saturn into this drama.  The trumpets play as Saturn disappears. Her journey behind the moon was punctuated by marching tones with sections of  ragtime until there is a lull at about halfway when she might cross the terminator on the far side of the moon.  Yes I know the music is only eight minutes in length, plus Saturn is circa one billion km  from Earth as opposed to the 384,400 km  between us and the moon.  Sometimes you have to suspend your disbelief for assimilation to work.

With my easel set up  and I began to sketch the moon through wispy cloud. The wait would be about one hour before Saturn would reemerge from behind the moon.  Not enough time for the desired detail, no cloud would have been preferable. However  I pressed on as I wanted to have some reasonable drawing of the lunar surface achieved before Saturn reappeared  on the  limb. It was ambitious in retrospect to use the binoviewers as the conditions were not perfect, but after setting them up there was no time to change back to a single eyepiece.

As the planet emerged from hiding, there was a wonderful change in her color against the darker sky. Rhapsody in blue ends for me when Saturn is welcomed back by the triumphant brass instruments and clashing symbols. The gas giant was almost tangerine in colour, perhaps dust in our atmosphere as she arced down to set.  Saturn seemed  to be flying along as our moon moved  out of her majestic way.   Rhapsody in Blue George Gershwin – The music may  play automatically depending on your device  but you can turn it off  🙂