Before going further, I would like to note a considerable gap in the guestbook between 1914-1920, denoted in a few blank lines in the book.  In fact, the last entry was January 8, 1915 (Giovanni Boccardi, the subject of last week’s Specola Guestbook column), and the next entry was not until January of 1920.  There are two possibilities for this gap. One possibility is that, for whatever reason, a different guestbook was being used during this gap period.  However, our archivist is not aware of any such book.  The other possibility is that during these years — during which the world was at war, followed by the Spanish Flu pandemic of 1918-1919 — the Vatican Observatory was closed to visitors.

It should be noted that the work of the Observatory during the War continued uninterrupted. In fact, due to blackout rules in Rome during the War, conditions for astronomy were greatly improved from 1915-1918.

Today’s guestbook entry notes the first visitor to sign after the gap period: on January 29, 1920, Emilio Bianchi made a visit. 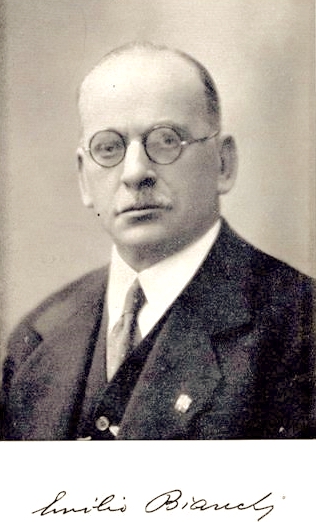 He directed the Roman College Observatory from 1919-1922.  From 1922 until his death in 1941 he was the director of the Astronomical Observatory of Brera in Milan.

He served as president of the Italian National Research Council’s Committee for Astronomy and Geodesy.

In 1936 he became one of the inaugural members of the Pontifical Academy of the Sciences.