Since its founding in 1891, many people have passed through the doors of the Vatican Observatory.  A quick perusal of our guestbook reveals several Names, including Popes, nobel laureates, astronauts, actors, and saints. Today’s guestbook entry is from November 29, 1913, when John Parkhurst made a visit. 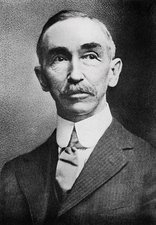 Parkhurst’s astronomical specialty was stellar photometry. Bear in mind that this was an era before C.C.D.’s or even photomultiplier tubes–you had to determine brightness based on the image of a star on a photographic plate.

He published more than 100 papers over his career.

In 1912, he published the “Yerkes Actinometry” in the Astrophysical Journal. This was a catalog of the magnitudes, color indices, and spectral classification of every star brighter than magnitude 7.5 between declination 73 degrees and the celestial north pole. [Author’s note: the paper itself is a fascinating read if you are interested in how photometry was done in the era of photographic plates. Plus, it has pictures of the instruments used.]

There is a crater on the Moon that bears his name.