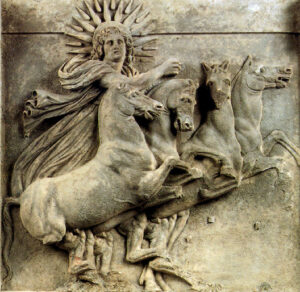 Many of my Astronomy 101 students are ‘nones’. When the class touches on early ideas about how the universe works, ideas that might involve religious concepts such as the god Helios being the reason for the rising and setting of the sun, students will often volunteer their lack of belief in any religion, and marvel at how people ever relied on ideas like Helios to explain the world. But when the class moves into the subject of intelligent life on other worlds (where we learn about the historical and scientific track record regarding the idea of intelligent extraterrestrials—and it is not a good track record, as I have recently discussed at length) a surprising number of students reveal a belief in things with little more scientific or logical basis than Helios.

At the end of the “extraterrestrials” unit, I invite the students to dive into the deep end: to find a good “true” story about aliens (or an Earth-bound equivalent, like Sasquatch or ghosts), and give a presentation on what they find, and on whether they believe what they find. This little project is supposed to be an exercise in critical thinking. However, a surprising number express either (a) that they in fact found the material they turned up to be convincing, and that the stories of abducting space aliens, ghosts, or lizard people, are true; or (b) that they are open to believing what they found. This is despite what we cover in class, and despite the unbelievably weak “proof” offered by any of these stories. Visitors to public nights at our observatory have offered similarly uncritical views—or subscribe to other ideas that lack much scientifically persuasive power, like the idea that the Apollo moon landings were hoaxes. Clearly a society of increasing numbers of ‘nones’ is not necessarily a society that will be dominated by a sort of cool, scientific rationalism. 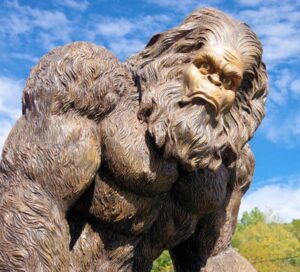 From the Bigfoot Festival in North Carolina.

How is a scientist to respond to such stuff?

Sasquatch is a particularly interesting case for the scientist. Sasquatch is a really popular idea—a perennial student choice for the project. The internet is full of videos purporting to show a multitude of Sasquatches here and there, all of which somehow have managed to elude the scrutiny of science. And, unlike abducting aliens, or secret lizard-replicants of world leaders, Sasquatch is a fairly simple, plausible concept. It does not require super spaceship technologies or other stuff that belongs in the realm of science fiction (or fantasy) rather than science. No, the Sasquatch concept simply says that there is a really big primate out in the wilds of the world, a primate of which no specimen, living or dead, has ever been bagged for science. How can a scientist hope to answer that?—especially when the internet is full of “The Truth” about Sasquatch?

Here is one thing a scientist can turn to:

Consider the term “Sasquatch”. When did it appear? Thanks to Google Books, one can search for an unusual term, like “Sasquatch” in a vast number of books published across many centuries. By restricting the range of dates searched across, one can learn something about when the term came into use. I did this with “Sasquatch”. I could not find any solid references to Sasquatch until after the Second World War.

An even simpler way to study this is to use the Google Books Ngram Viewer (click here to try it), which graphs the frequency of occurrence of a word among the books that Google has digitized. Here is what the Ngram Viewer returns for “Sasquatch”: 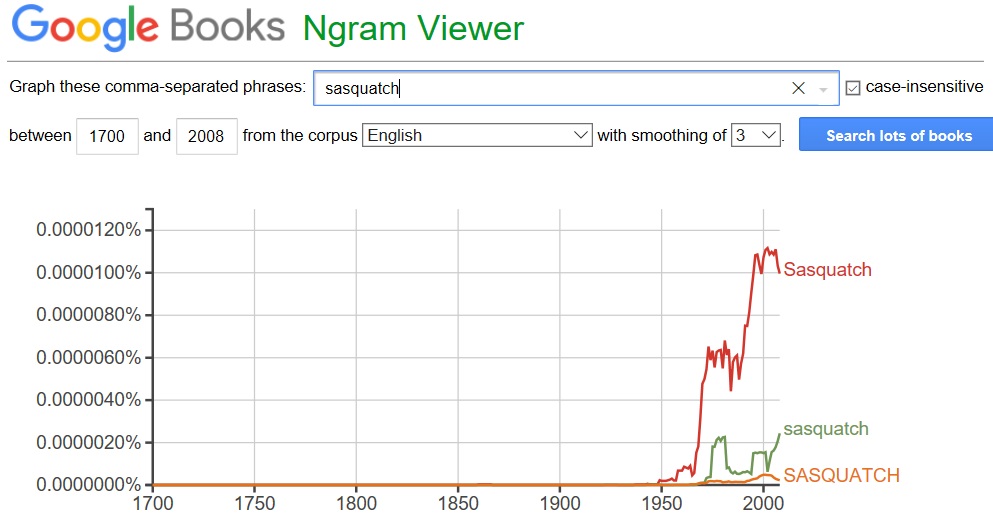 If Sasquatches really did exist, we might expect that writings from the eighteenth and nineteenth centuries would feature some mention of Sasquatch. After all, that is when there was a rapid expansion of people into the North American wilderness. We might expect people to report encounters with these supposed creatures, just as they reported encounters with bears. 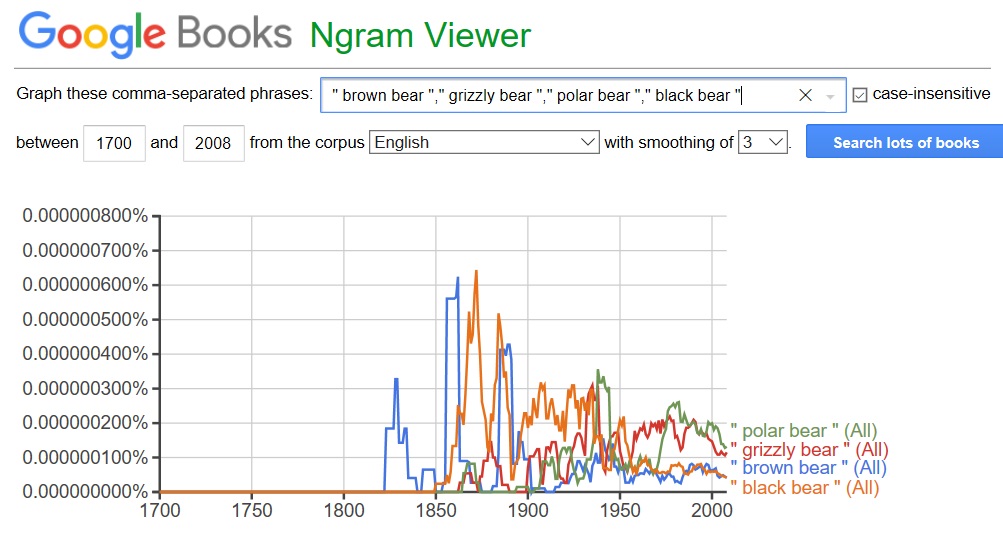 But apparently, while people wrote about the bears they encountered, they did not write about the Sasquatches. Indeed, it rather looks as though Sasquatch is a creation of the 1960’s, in a way that bears are not (the Ngram graphs for “Bigfoot” and “Yeti” are very similar to the one for “Sasquatch”). The rise of Sasquatch as reflected by this graph is surely some sort of indication of a rise in belief—but not belief in science.