At 12:27 local time on Sunday June 18, Kevin Newton emailed this image from the Large Binocular Telescope (LBT) building with the caption, “VATT is in trouble.” 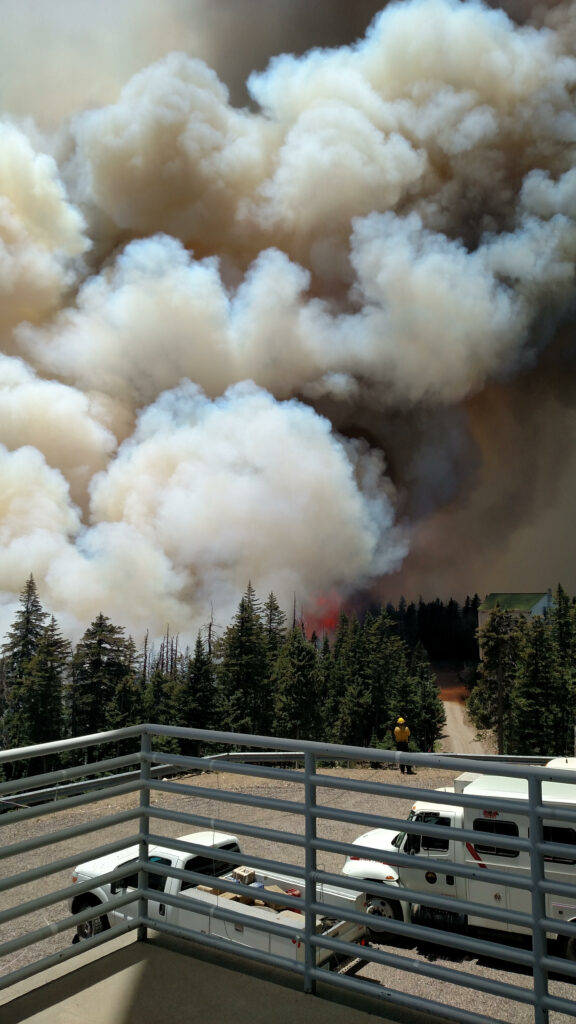 The photograph shows a red plume of fire in the direction where the VATT (Vatican Advanced Technology Telescope) ought to be. When I saw it, I was very nervous but I knew that things cannot be quite as bad as the picture suggested. Kevin’s email came to me via the microwave communications tower standing 15ft from the VATT building. ‘If the tower is OK,’ I kept telling myself, ‘then the VATT must be OK, too.’

The fire was started by lightning around 2:45pm on June 7 in a fire scar left by the 2004 Nuttal Complex Fire in the vicinity of Frye Canyon about 4 miles north-northeast of the LBT building. In the morning of June 10 its size was estimated as 50 acres. The risk to the astronomical facilities on Mt Graham was deemed ‘LOW’.  The only concern was that the fire was spreading in a southerly direction, i.e., towards us, and on June 10 the distance was estimated as 2.5 miles.

Eric Buckley, director of the Mt Graham International Observatory (MGIO) started sending us daily updates. The MGIO is a branch of the University of Arizona’s Steward Observatory. The mission of MGIO’s team of a dozen is to support the three astronomical facilities on Mt Graham: the LBT, the Submillimeter Telescope (SMT), and the VATT. As of the morning of June 11, the fire had grown to 300 acres. Eric’s update on June 12 reported no significant changes but that evening there was a public meeting, and Eric wrote:

The fire is burning between 6300 and 9000 ft elevation. The fire has grown to over 580 acres and the Forest Service (FS) has significantly ramped up their efforts to prepare for the fire. They have employed over 160 people. They have re-built over 8 miles of fire breaks […] The FS has a high level of confidence that the fire lines that have been re-established will hold this fire back. They will continue to hold off putting people at the front lines as long as the fire is in dangerous terrain. They made it very clear last night that all decisions are ‘risk based’ and they will not put their people’s lives in danger if it is not absolutely necessary. They basically are being patient and letting the fire come to them. There was a lot of concern that this fire wasn’t getting the ‘attention’ it deserved. The FS officials stressed that fire fighting resources are distributed to the fires that have the most values at risk. At this point in time the Frye Fire is not posing enough risk to merit any more resources than it has right now.

[The fire] ran south all the way up Frye Canyon towards High Peak then fell back in on itself […] Fire fighters are continuing to prepare for attack on both the south ends of the fire (High Peak) […] However, fire officials still have a high degree of confidence that they will be able to combat this blaze in a orderly and calculated fashion.

As a precaution, all observers and UA personnel left the telescope site that day, except for three LBT men (including Kevin Newton) and two MGIO men who remained at the summit to monitor the situation. In the morning of Saturday June 17, Eric reported:

The Frye Fire has grown to 6,305 acres. There are over 300 people assigned to this fire which is approximately 16% contained. Six helicopters have been assigned to this fire. [It] is being transitioned to a Type 2 Incident. This means that over the weekend a new fire management team will assemble and take over the fire fighting efforts […]. The fire has reached and surpassed certain trigger points that were set down from the original management team plan. Now that those lines have been reached and in some cases surpassed, new tactics are needed to combat this blaze.

The fire has moved within ½ mile of the site. Some back fires were set yesterday evening […] in an effort to suppress the southerly advance of the fire. Unfavorable winds put a halt to this effort, but more fires will be set today to resume this fight. Under FS command, MGIO crews will be running the sprinkler system around the site starting this morning […]. To keep up with demand, MGIO crews will be running a water supply truck around the clock until it is no longer necessary.

On Saturday June 17 in the afternoon, the fire spread southward, burning a large tract of the forest untouched in 2004 reaching the north side of the telescope site, threatening the utility building. Christian Veillet, director of the LBT Observatory wrote:

[T]he firefighters and a ballet of helicopters succeeded in protecting the utility building which is currently not threatened anymore (see attached picture by Steve Allanson taken from [LBT’s] roof with a Chinook dropping water near the utility building). The observatory was powered on again and the main subsystems restarted, restoring communications through the network as well as the rotation of the building & telescope to aid the spotters. 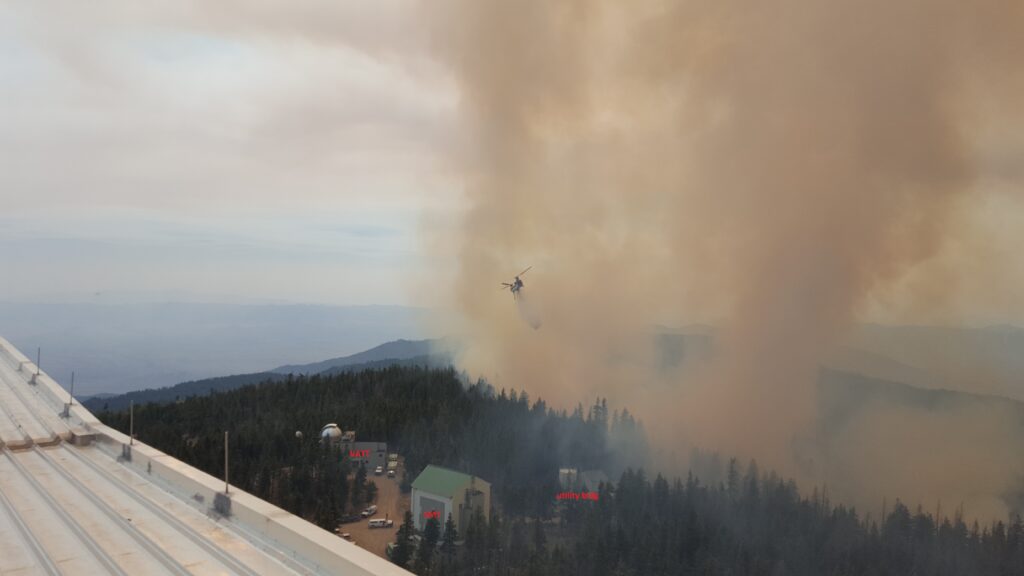 By Sunday June 18 the fire skirted around the LBT building on the eastern edge of the telescope site. A timelapse video of this development was uploaded to youtube. The trees to the south of the site started burning, and the fire reached the access road (see map below). That was the situation captured in Kevin’s photograph (top of this post). The three LBT men left the site, with Kevin leaving shortly after sharing the first photograph above. They left a webcam pointing southwest from the roof of the LBT.

At 2:40pm on Sunday Eric Buckley forwarded the following report:

The latest fire storm has subsided. It got within feet of the VATT. A walk around all of the buildings show that they have taken some heat but none appear to have been damaged.

Choppers and bombers have laid down retardant on and around the site. Immediate threat seems to  have been fought back, however, the FS sees another possible fire fight coming on the heels of this last one.

Power remains on and most important everyone on site is safe and doing well.

After dark on Sunday evening the LBT roof camera showed some glowing embers in the patch of trees 50 ft to the southeast of the VATT, but as of  the morning of Monday June 19 the situation looks calm, with most of the trees adjacent to the VATT and to the east of the access road intact (below). Also note that there is still a lot of smoke at the site. 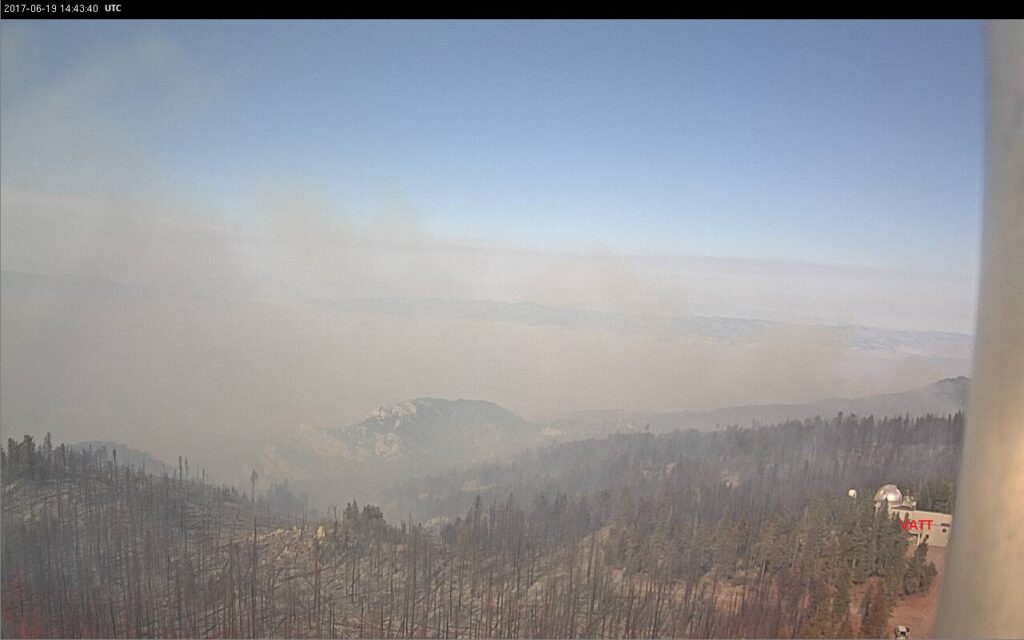 To summarize: As of Monday June 19 morning, there has been no harm to UA staff and MGIO observers, and (to my knowledge) no serious injuries to the firefighters. The damage to the facilities is primarily due to smoke. There may be some damage due to heat. We shall assess the situation as soon as it becomes practical. The fire continues but currently not in the vicinity of the telescope site. The official “Estimated Containment Date” is given as July 30.

You can follow the developments live thanks to the LBT roof webcam: http://info.lbto.org/frye-canyon-fire and two webcams at ground level (at the UAPD and utility buildings) http://mgio.arizona.edu/webcams-weather. The LBT’s (John Hill’s) all-sky camera on VATT’s roof is covered in ash but it is also working: http://abell.as.arizona.edu/~hill/AllSkyCurrentImage.JPG.

The official information (not particularly up-to-date; the map has not changed since Friday) is available at inciweb.nwcg.gov.

The local newspaper has been following the fire, providing impressive photographs: GilaValleyCentral.

Stay tuned to the Catholic Astronomer for further updates.