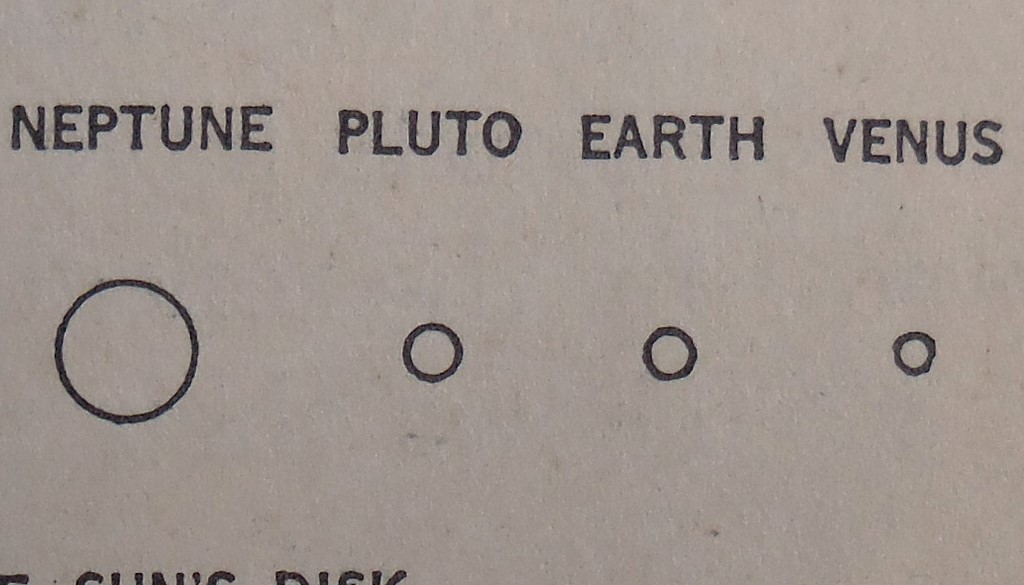 Do you think Pluto is still really a planet?  Well, here is a book for you:  Useful Science for High School: A Textbook in General Science, by Henry T. Weed, Frank A. Rexford, and Franklin B. Carroll—published by the John C. Winston Company, copyright 1935.  In it, Pluto is definitely a planet.  It is bigger than the Earth, even!  It is right there, in a diagram showing “the relative sizes of the sun and the planets”—Figure 552, page 657 (this book had a lot in it!).

Pluto had only been known to astronomers for five years when Useful Science was published, but the diagram is sort of odd.  A table below it gives Pluto’s diameter as being 4000 miles, with a (?) next to that number.  Earth is listed as having a diameter of 7918 miles.  The diameter of Mars is given as 4200 miles.  So the book’s diagram is not in agreement with the book’s own numbers.*

This oddity aside, Useful Science shows us something.  Pluto used to be bigger than it is now.  Or, more correctly, we used to think Pluto was bigger than we do now.

I have a collection of old science books, and it is interesting to see what each book gives for Pluto’s diameter:

As you can see, by the 1980s the size of Pluto had been revised dramatically downward.  That would not stop.  Google Pluto’s diameter now and you get 1,476.8 miles (Googling Earth and Mars returns 7,917.5 and 4,212.3 miles, respectively—pretty much the same as Useful Science).

How did this Pluto shrinkage happen?  Pluto is so distant that when it was discovered its disk could not be resolved with any telescope available.  All that could be seen of Pluto was a dot of light.  I presume that its size was estimated based on that light: assume a typical surface brightness for a planet, such as Mars, and then figure out how big the planet would have to be to reflect as much light as was seen in the telescope.

But Pluto is not Mars.  According to NASA’s Space Science Data Coordinated Archive the “albedo” of Pluto is 0.72.  The albedo of Mars is 0.25.  A perfectly white, completely reflective surface has an albedo of 1.00; a perfectly black, completely absorptive surface has an albedo of 0.00.  Pluto has a rather white surface, as you know if you have seen the photos from the “New Horizons” probe that flew by it.

Over time we got better estimates of Pluto’s size—from watching it passing in front of stars and timing how long it blocked their light, from better telescopes, and of course now from the New Horizons probe.  So now we know that Pluto is tiny.  It is much smaller than the moon, let alone Mars, let alone Earth!

*The diagram in Useful Science might not be just an odd error.  With a little searching, I found a similar diagram (below) in Astronomy: The Splendor of the Heavens Brought Down to Earth, by Arthur McCracken Harding—also copyright 1935.  Apparently, there was some source out there in 1935 that was saying that Pluto was as large as or larger than Earth.  Of course, people might have expected that to be the case, since Pluto follows Jupiter, Saturn, Uranus, and Neptune, which are all much larger than Earth.