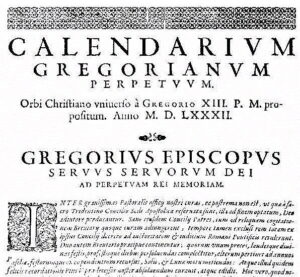 Contrary to common understanding, the leap day in the Roman calendar is not February 29 but rather February 24!

Why February? March was the first month of the year, as the months still named after numerals attest: September, October, November and December were the 7th, 8th, 9th, and 10th months respectively because the first month was the month dedicated to Mars, the God of War.

By the way, the Bull of Gregory XIII, incipit “Inter gravissimas,” promulgating the Gregorian reform of the calendar, is dated, by our reckoning, on February 24, 1582, i.e., on the bissextile day preceding the year in which the reform was introduced. This was very clever considering that the reform largely focused on the modification of the leap-year rule (omitting 3 leap days every 400 years).

Read more about calendars on the VOF’s Faith and Science Archive:
https://www.vofoundation.org/faith-and-science/history-church-science/calendars/