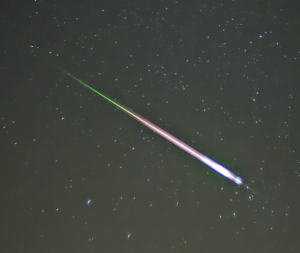 The Perseids are the most popular meteor shower as they peak on warm August nights as seen from the northern hemisphere. The Perseids are active from July 17 to August 24. They reach a strong maximum on August 12 or 13, depending on the year. Normal rates seen from rural locations range from 50-75 shower members per hour at maximum.The Perseids are particles released from comet 109P/Swift-Tuttle during its numerous returns to the inner solar system. They are called Perseids since the radiant (the area of the sky where the meteors seem to originate) is located near the prominent constellation of Perseus the hero when at maximum activity.

Community Building with Zooniverse, an Online Platform for Citizen Science

Conjunction of the Moon and Saturn