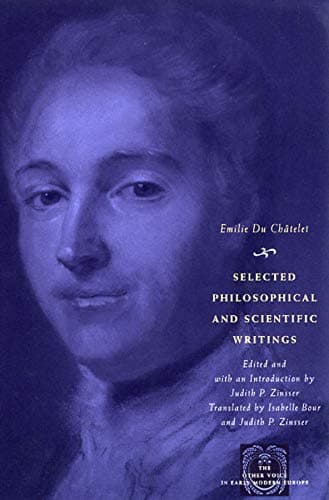 Gabrielle Émilie Le Tonnelier de Breteuil, Marquise Du Châtelet, wrote, among other things, a translation and commentary on Isaac Newton’s Principia (published posthumously in 1759), and a physics textbook for her son, entitled Institutions de Physique (Foundations of Physics, published in 1740).  This collection of her philosophical and scientific writings, edited by Judith P. Zinsser, includes translations of substantial portions of these works and others.  Zinsser’s translation of Institutions contains all of the Preface (discussing, among other things, the utility of mathematics and the usefulness of experiments), all of the first chapter (discussing principles of knowledge and reasoning), all of the second chapter (which contains logical arguments for the existence of God and for determining the basics of God’s nature), as well as chapters on time, matter, motion, and force.  Emilie Du Châtelet was a complex person—she sought education and access to the world of science at a time when women were largely unwelcome in the field, but she focused on her son’s education in science far more than her daughter’s; she attended mass regularly and wrote on the existence of God, but maintained a long-running affair with Voltaire, and in her unpublished writings wrote detailed and harsh criticism of scripture.  Zinnser’s book consists largely of translations of Du Châtelet’s work, but also includes some background information.

From the book’s publisher, the University of Chicago Press:

Though most historians remember her as the mistress of Voltaire, Emilie Du Châtelet (1706–49) was an accomplished writer in her own right, who published multiple editions of her scientific writings during her lifetime, as well as a translation of Newton’s Principia Mathematica that is still the standard edition of that work in French. Had she been a man, her reputation as a member of the eighteenth-century French intellectual elite would have been assured.

In the 1970s, feminist historians of science began the slow work of recovering Du Châtelet’s writings and her contributions to history and philosophy. For this edition, Judith P. Zinsser has selected key sections from Du Châtelet’s published and unpublished works, as well as related correspondence, part of her little-known critique of the Old and New Testaments, and a treatise on happiness that is a refreshingly uncensored piece of autobiography—making all of them available for the first time in English. The resulting volume will recover Châtelet’s place in the pantheon of French letters and culture.

Islam, Science, and the Challenge of History

Sweltering Heat, Bitter Cold, Torrential Rain, Historic Floods: Why your friends, your family members, your co-workers, members of your church, your elected officials, and perhaps you yourself might be skeptical regarding Climate Change