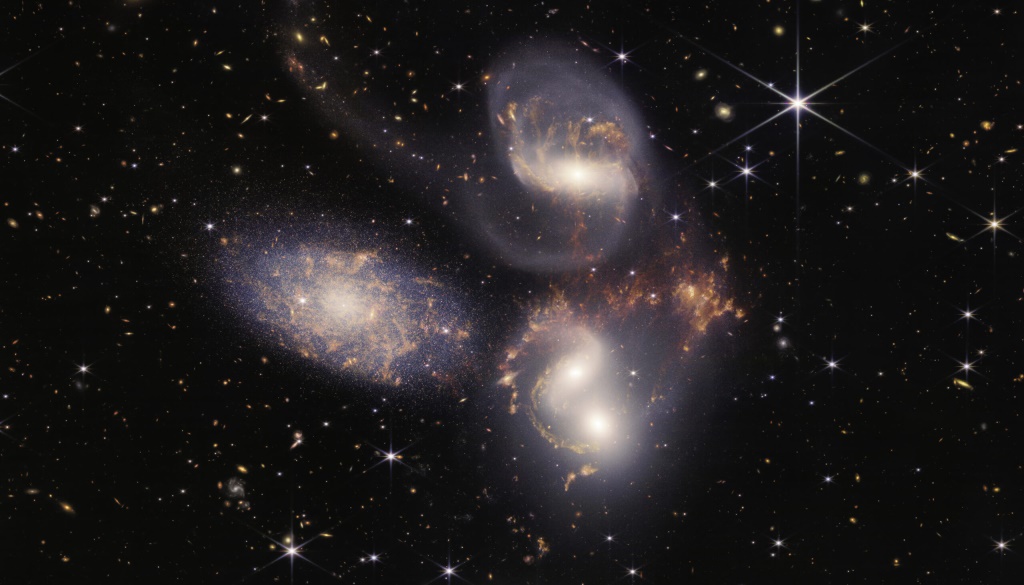 By now, I presume you have encountered two kinds of James Webb news pieces on the internet. The positive pieces are from outlets like NASA and the ESA – First JWT images, news releases about the mission progress, and excitement of what we may learn in the future from this amazing telescope.

The negative pieces are click bait attention grabbers with titles that insinuate that James Webb has found something terrifying. Sadly, every field of study has a fair amount of “junk material” in cyberspace. These pieces trend toward fear and conspiracy to draw you into their content and away from the primary sources.

A legitimate question to ask when encountering this junk is, “Why do organizations post this nonsense?” Ultimately, only those who post this garbage can give a clear answer, but my gut tells me that money is a major motivator.

For example, YouTube has become both an amazing platform for learning and education, but also a seedbed for a lot of hysteria. Since YouTube allows groups to monetize their content, the more views, likes, and subscriptions a channel can get, the more money they can make. Sadly, fear and conspiracy sells better than honesty and truth, creating a cyber environment for people with less than ideal motivations to try to scare you and me into their content.

So, how should we navigate astronomy in cyberspace? For starters, go to the primary sources. Groups like NASA, ESA, and other professional astronomy agencies are always a good first start (along with the Vatican Observatory and Sacred Space Astronomy). Why might you ask? One of the reasons is that professional astronomy agencies are the ones that do the research, have the primary data, and can help us navigate through some of the pitfalls interpreting the primary data presents.

Obviously, my recommendation of primary sources implies that the scientists who do research on things like the James Webb Telescope, Hubble Telescope, and the VATT are essential. For example, Dr. Brenda Frye has offered a number of reflections on Sacred Space Astronomy and has been one of my favorite presenters at our faith and science workshops. She’s a brilliant scientist, engaging teacher, and has actually had time on the Hubble Space Telescope as part of her research. When Dr. Frye would explain to us what her team has learned from Hubble images and shows us what she has captured, it always rings with a deep tone of authenticity and truth.

Dr. Frye’s work and presentations have helped me appreciate James Webb Telescopes images in a deeper way than if I had not had her presentations. When the image below was dropped, my first reaction was, “I know what’s going on in this image!! Well… I somewhat understand what’s going on…” What’s going on? When I saw the distortions and “swirly-ness” of the image, I was taken back to Dr. Frye’s presentation on gravitational lensing. You can click on this link to a piece offered by Bob Trembly that offers a summary of gravitational lensing along with Brenda’s work.

When looking at this image and thinking about gravitational lensing, there are two things that jump out at me: The things I have awareness of and things I don’t have awareness of. The things I have awareness of are galaxies that are “twinning.” Dr. Frye explained that one of the effects of gravitational lensing is that it can create multiple reflections of deep space objects. By sharing with us her images from the Hubble Space Telescope, I have been looking for potential “twins” in this James Webb image. I can’t wait to read further research to see if my potential twins are correctly identified!

I’m also familiar with simple things like the diffraction spikes of the stars. I’ve explored this topic in the past, but when I saw the first calibration images from James Webb my initial reaction was, “Huh, I wonder if they are using a bahtinov mask focuser on this telescope?” A bahtinov mask is a simple tool astrophotographers use to get incredibly precise focus with their telescope. Below is an image I’ve shared in the past of what stars look like through a bahtinov mask.

In regard to the things I don’t have awareness of, I can’t tell you the names of… well… anything in the above James Webb image. Yes, I can see there are stars and galaxies, but I don’t know their names, location, or distance. I will learn them with time, patience, study, and research. And that is the connection I see between my astrophotography images and the James Webb Telescope – Understanding what we don’t know so we can grow in knowledge.

When I first tried to understand the night sky, I constantly experienced a mix of, “Wow, that’s amazing” commingled with a slightly overwhelming sense of, “There is so much to learn.” Let’s revisit the image I captured of my summer astrophotography targets.

“M” numbers are objects that were cataloged by Charles Messier. He was a French astronomer who lived in the late 1700’s to early 1800’s. His passion, as was the case for many astronomers of that time, was to find comets. During Messier’s time, it was considered a bit of status symbol to have discovered a comet.

Messier discovered 13 comets, but he also found a number of other objects that were, for lack of a better term, “comet duds.” He found 110 objects he hoped were comets, but ended up being something else. He still cataloged these objects and they became known as Messier objects. Therefore, the “M” number represents those objects Messier observed, but moved on from in his search for comets. So, the next time you see astronomy images with a number like “M101,” you know that the image you are looking at is part of Messier’s catalog. NGC stands for “New Galactic Catalog.” We’ll explore that in my next piece.

The process that led to the development of the Messier numbers reminds me of my relations with Hubble and James Webb images. Messier knew what he was looking for – He was looking for comets. He didn’t know what the Lagoon Nebula or Trifid Nebula were, but still was attentive to their existence. Thanks to Dr. Frye, I have a very basic understanding of the effects of gravitations lensing, allowing me the fun of looking for potential “twin images” in the James Webb image. At the same time, I don’t understand the vast majority of the Webb image, but being attentive to the unknowns and following scientists who will explain these images will yield similar growth in understand as did the further study of Messier objects. It took a community of star gazers to re-investigate Messier’s objects to find nebulae and star clusters. What will we find in the James Webb Telescope image as we are attentive to both the things we understand in this image and the things we don’t understand? Time will tell!

To prep you for my next post, look up for yourselves the objects I’ve labeled in my image: M8, M20, M21, and NGC 6544. What can you learn from them of the good stuff we find in cyberspace?

Also, start to look for explanations of the objects in the James Webb image. There isn’t much that I’ve found, but the exploration and attentiveness to the unknowns will eventually lead to a deepening of our understanding of God’s creation.

I can’t help but add this addendum of the connection I see with exploring these images and faith. If we apply this approach of Charles Messier’s cataloging of “comet duds” to Scripture, we can find a powerful metaphor for growing in knowledge of God. As a priest of 18 years, I have been through the Bible many times. I might read the same passage about 50 times for different reasons, but if I’m only attentive to the things I understand about a given passage, I will never deepen my understanding of Scripture. Then it happens – The 51st read makes something jump out at me I was not attentive to. Those are moments when I feel like I’m reading the Bible again for the first time. I presume its similar to the joy a scientist gets when they pour over the information of the images they dedicate their lives to study and find something that wasn’t understood before.

So, in addition to looking up information on M numbers, pull out your Bible and find your favorite passage. Slowly read and pray with it multiple times. Ask God, “What am I to learn from this passage?” Just as a good scientist never looks at a telescope image and presumes they have learned everything that can be learned about space, let us never approach Scripture as a “one and done” text, thinking a simple reading is enough. Let us embrace what we know and explore what we don’t understand form Scripture, so we, as a people of faith, can also revel in the joy of discovery.