And then I wrote: As I mentioned last week, in 2009 the Redemptorist Press invited me to write a series of reflections on issues of religion and science for the Sunday bulletins that are distributed in churches throughout the United Kingdom.

Recall, the days of the week in 2009 match those of 2020 (after this year’s leap day) and the liturgical calendar also matches; thus, both in 2009 and 2020, the 15th Sunday of Ordinary Time falls on 12 July. Here’s what I wrote for the second reflection… it’s a new retelling of a tale familiar to most of our readers.

Since most of the text material is familiar, I am appending at the end a number of historical images from our archives that you may not have seen before… 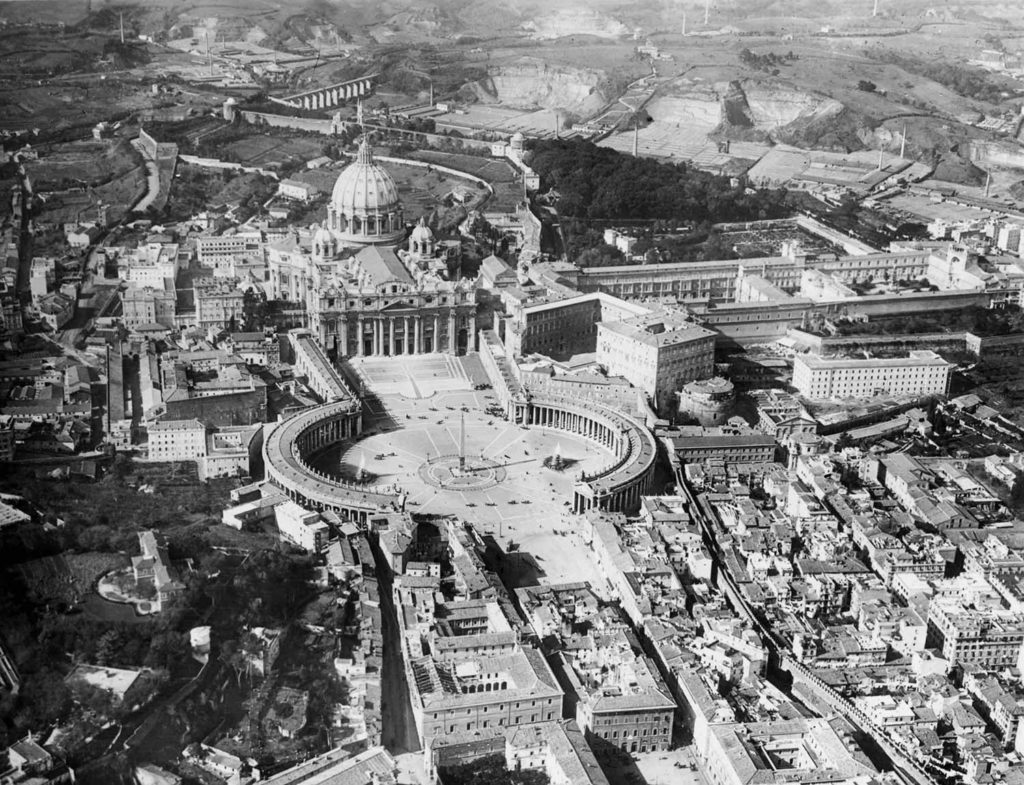 This was the Vatican in 1924. Look carefully at the wall behind the Vatican and you will see two telescope domes! That’s where the Vatican Observatory was situated until it moved to Castel Gandolfo in the 1930s…

Studying creation is a time-honored way of coming closer to God. In the opening chapter of his Letter to the Romans, St. Paul points out that, since the beginning of time, God has revealed Himself in the things that He created. Thus it is not surprising that the Church should support science.

In 1891, Pope Leo XIII founded an astronomical research center at the Vatican. Telescopes were built on the walls surrounding the gardens behind St. Peter’s, and instruments were installed in the Tower of the Winds atop the Vatican Library. Pope Leo’s reasons were straightforward: “This plan is simply that everyone might see clearly that the Church and her Pastors are not opposed to true and solid science, whether human or divine, but that they embrace it, encourage it, and promote it with the fullest possible dedication.”

…instructed the Pope to hire astronomers and clear up the confusion in the calendar. At that time, the system established by the ancient Romans had drifted out of sync with the seasons: spring was arriving ten days too early. Furthermore, the expansion of Christianity to Asia and the New World meant that a more reliable system was needed to calculate the date of Easter.

Pope Gregory XIII established his reformed calendar in 1582. One of the key mathematicians involved was the Jesuit priest Christopher Clavius. He continued his work in astronomy at the Roman College for the next thirty years. Late in his life, Clavius even got a chance to look through Galileo’s telescope. (He and Galileo were old friends; when Galileo was a young man, looking for a job, Clavius had written letter of recommendation for him.)

Over the centuries, priest-astronomers in Rome played a key role in a number of advances in astronomy. For example, Fr. Nicholas Zucchi invented the first telescope using mirrors instead of lenses, an idea used by all large telescopes today. Most notably, Fr. Angelo Secchi was the first astronomer to measure the colors of stars with a prism and classify them into different types: this was the beginning of modern astrophysics. 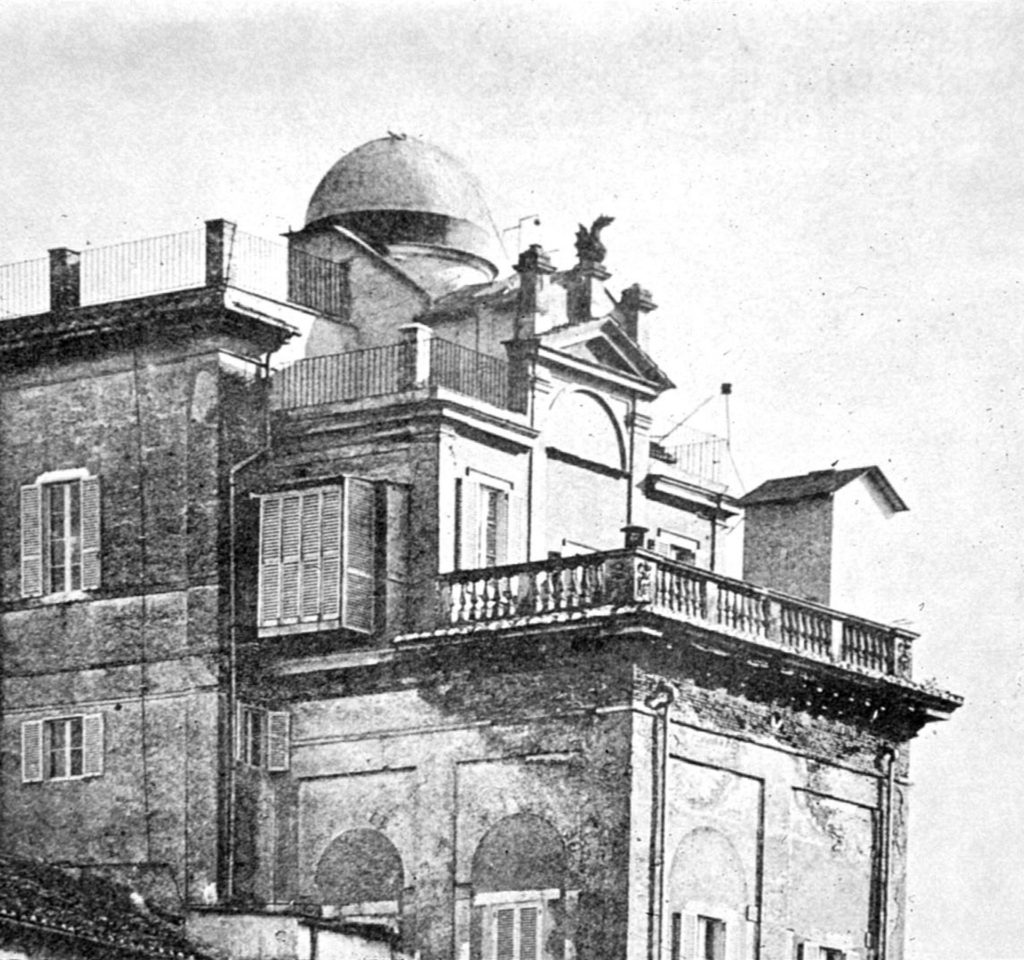 The tower of the Winds had a telescope in the early 1900s… the dome is not there anymore.

The re-establishment of the observatory by Pope Leo in 1891 followed the unification of Italy, when Fr. Secchi’s telescopes were confiscated by the anti-clerical Italian government. Soon the Vatican Observatory was to take part in a major international program to map the positions of the stars using large telescopic cameras. In the 1930’s, to escape Rome’s light pollution, the observatory moved to the Pope’s summer home in the hills of Castel Gandolfo. When city lights eventually reached Castel Gandolfo itself, observing was transferred to the deserts of southern Arizona. There in 1993 the Vatican Observatory opened its Vatican Advanced Technology Telescope, pioneering revolutionary design techniques now in use at many of the world’s largest telescopes.

Research today continues in Arizona and Castel Gandolfo, in fields ranging from The Big Bang to the structure of galaxies, from mapping stars in our Milky Way to understanding meteors and meteorites in our own solar system. Vatican astronomers, an international community drawn from Europe, Africa, and the Americas, are well respected in the world of astronomy. They work with astronomers from every major observatory, and several Vatican astronomers have been elected to leadership positions in a number of international astronomical organizations.

But through all their success, their motivation continues unchanged. They work to show the world that the Church supports science; and to come closer to the Creator by studying His Creation.

So, as promised, here are a few unusual images from our archives: 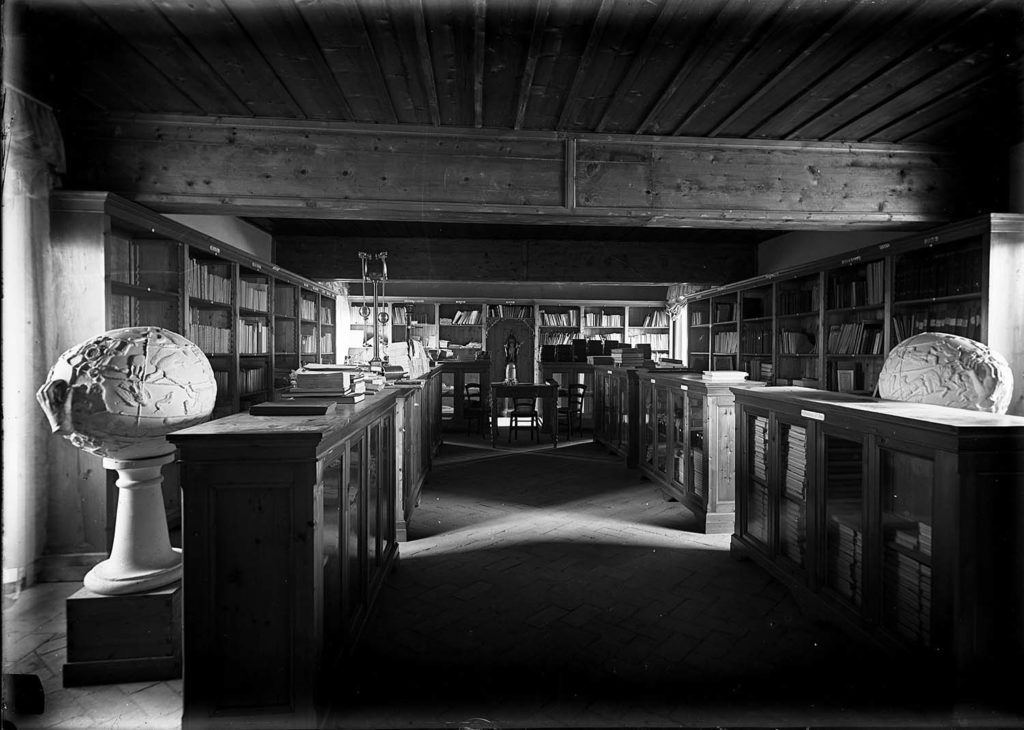 The Vatican Observatory astronomical library in the Tower of the Winds

When Pope Leo founded the observatory, he gave over all the rooms in the Tower of the Winds to be used as offices. This photo from around 1900 shows the astronomical library, along with a couple of odd sky globes… 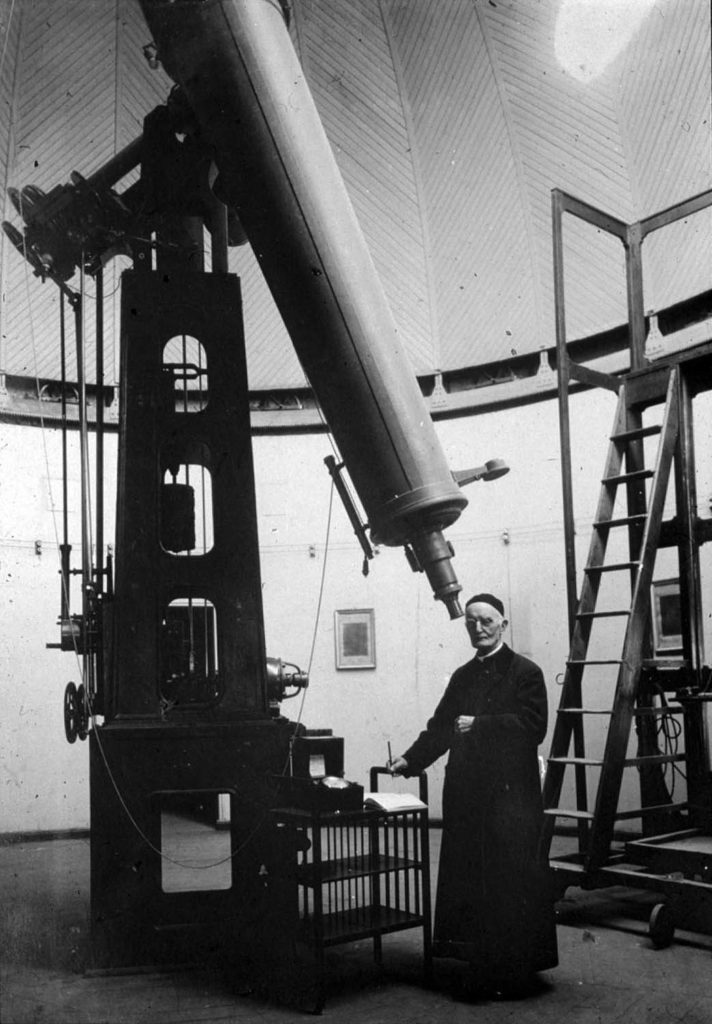 An elderly Fr. Hagen at the telescope in one of the domes on the walls for he Vatican; judging from his age I would date this as in the late 1920. This telescope did not make the move out to Castel Gandolfo. 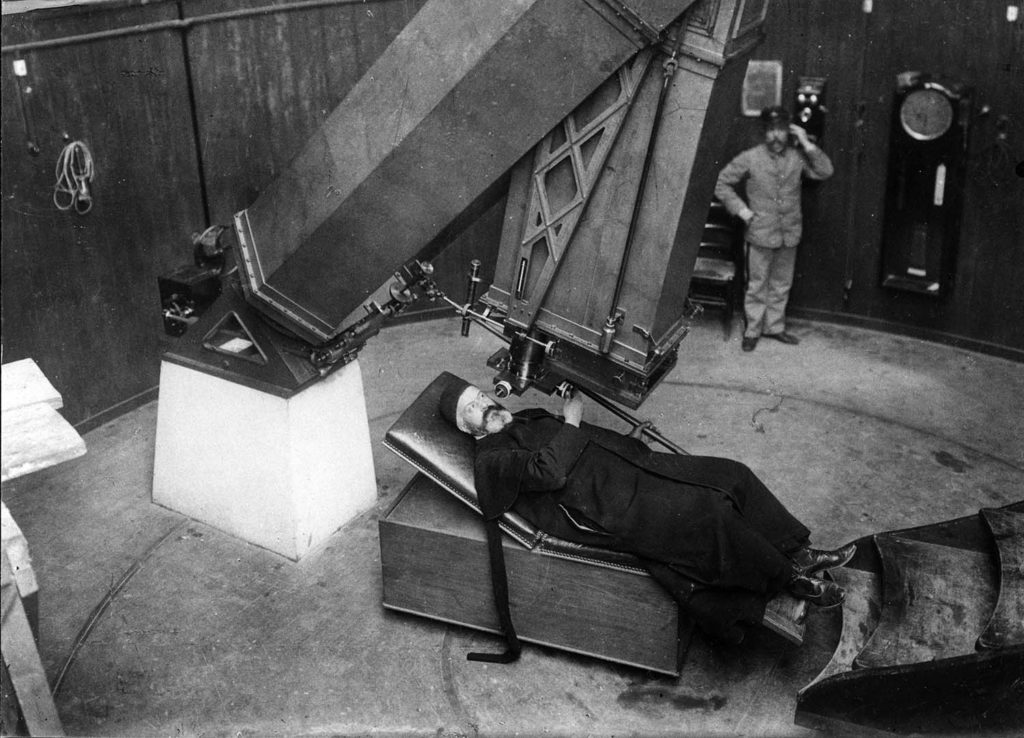 Fr. Lais was the astronomer who took most of the Carte du Ciel images, making a photographic map of the sky with this telescope. In the back is the engineer Federico Mannucci 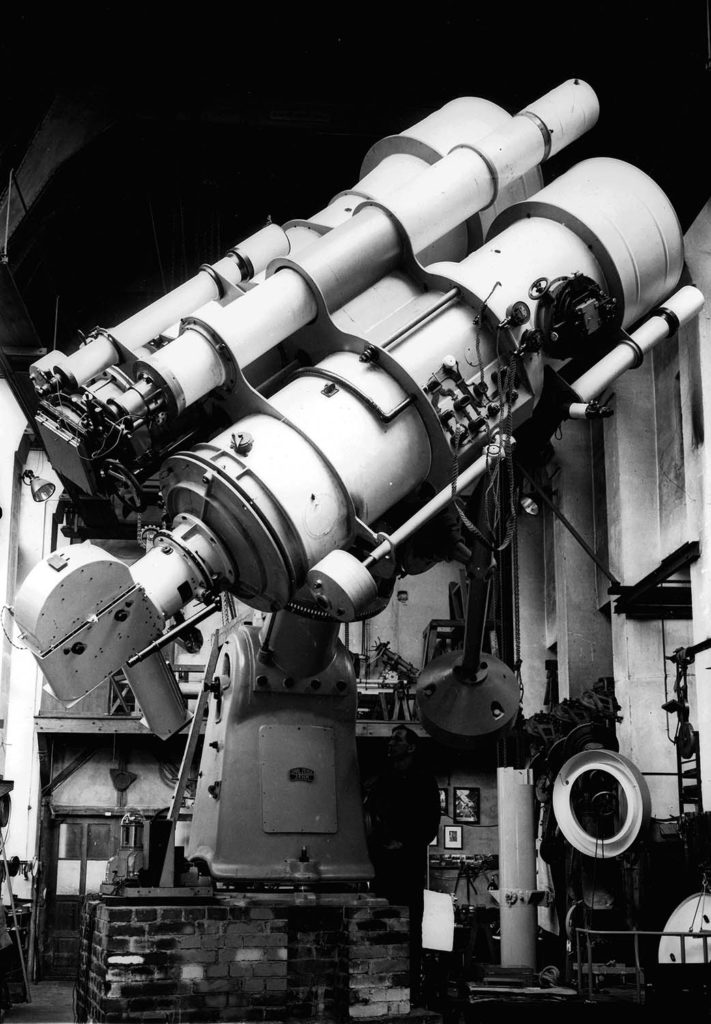 The Zeiss (Jena) Double Astrograph, apparently being assembled in Jena before it was shipped to Castel Gandolfo.

Here’s one I just came across… the Zeiss company made four of these double telescopes, two telescopes on one mounting; the Schmidt design in the late 1930s made the concept obsolete. Besides the one in Rome, the other three wound up in Venezuela, (then) Czechoslovakia, and China.

This looks to be in a factory (not a dome), probably in Jena where Zeiss was located before the war. It’s certainly not in Castel Gandolfo. The big finder scope between the two larger telescopes is certainly on our telescope, it is a fantastic 5 inch refractor with pre-war optics. The big gizmo at the bottom left is a spectrometer that I recognize we once had in Castel Gandolfo; I think I know where it is now, gathering dust in a storage shed. 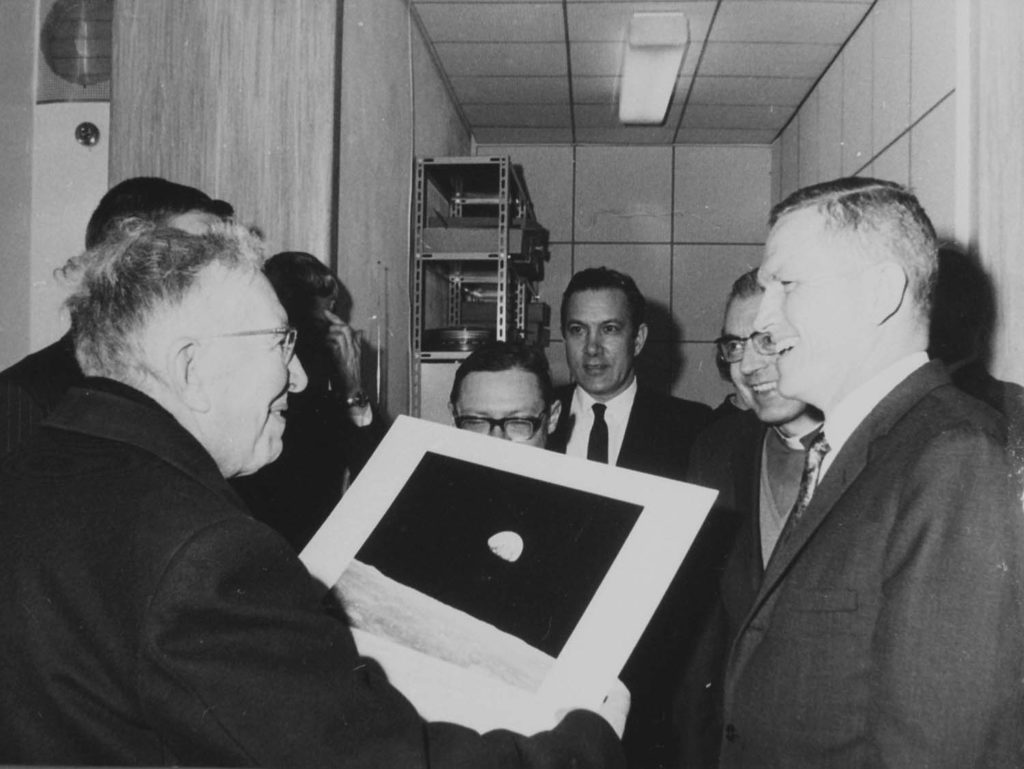 One last historical image. Frank Borman was, of course, the astronaut who commanded Apollo 8 on its trip around the Moon, just two months prior to this visit to the Observatory. The photo is the famous “Earthrise” image; for many years, he and Bill Anders debated who actually took that image. Best research appears to indicate that it was Anders, not Borman. The fellow holding the image is Fr. Daniel O’Connell, who was director of the Observatory from 1952-1970.