And then I wrote… in 2014, I was honored with an honorary doctorate from Georgetown University. Of course, they made me sing for my supper…

To the president, the provost, the dean, I thank you; honored guests, I greet you; to the Georgetown College Class of 2014, I congratulate you. I am honored to share this stage with you.

As you have heard, I am an astronomer; I am also a Jesuit brother. And I work at the Vatican Observatory.

Brother Doctor Guy (the one with the beard) and various deans and physics professors; I wish I were not so hopeless with names…

A lot of people are surprised to hear that the Vatican City State has its own national observatory. That’s one of the reasons we have it: to surprise people.

But there’s a long and honored history of the Church supporting astronomy. Jesuit astronomers helped Pope Gregory reform the calendar in 1582, and one of those Jesuits, Christopher Clavius, wrote a letter of recommendation for a young Galileo. There’s a crater on the moon named for Father Clavius, along with dozens of other Jesuits who are honored that way; it helps that the fellow who made the moon map and assigned the names we still use today, Giovanni Battista Riccioli, was himself a Jesuit. Another Jesuit astronomer, Roger Boscovich, helped convince the Vatican to reverse itself and accept the Copernican system in the 1700s.

As you may know, Georgetown itself once had a thriving astronomy department. Angelo Secchi taught here in 1849; he was the Jesuit priest who first classified stars by their spectra, to ask for the first time, what are stars made of, and how do they evolve? For that he’s called the Father of Astrophysics. He also was among the first to study the surfaces of planets, seeing them not just as dots of light in the sky but as places we could go and visit some day. More recently, Vera Rubin got her doctorate in Astronomy from Georgetown; it’s her observations of galaxies that showed us the existence of what we now call “dark matter.”

By supporting an observatory, the Church is doing more than just apologizing for Galileo. We are reminding the world – including Catholics – that the Church supports and embraces science. We are not afraid of the truth; we actively seek it. We know that we can find God in all things. Saint Paul himself reminds us that the Creator reveals himself in the things He has created.

We do a lot of interesting… [In order to read the rest of this post, you have to be a paid-up member of Sacred Space, and logged in as such!]

…astronomy at the Vatican Observatory. Members of our community, all Jesuit priests and brothers, study the mathematics of the Big Bang and String Theory, the evolution of stars and galaxies, the formation of moons and asteroids.

My own work measures the physical properties of meteorites, those rocks that fall to us from the Moon or Mars or the asteroid belt, scraps from the origin of the solar system four and a half billion years old.

It still gives me a thrill to be handling pieces of rock from outer space. My fellow astronomers think they study galaxies and stars and planets, but really, when they’re looking through a telescope, all they get to study are the photons, the bits of light, from stars and planets. I get to handle the real thing!

The Vatican has a collection of more than a thousand meteorites, and they’ve built a lab for us in the Pope’s summer gardens, outside Rome. We’ve developed techniques there to measure the physical properties of those meteorites; their density and porosity and magnetic susceptibility and specific heat.

And with the Vatican’s Advanced Technology Telescope, set on a mountaintop in southern Arizona, we can determine the shapes and composition of asteroids, including small asteroids that pass nearby the Earth, which is where we think our meteorites come from. From work like ours some day we may know better how to divert a killer asteroid, or mine one for its mineral wealth.

But the question I get asked most often has nothing to do with dark matter or asteroid surfaces. When people hear I am astronomer at the Vatican, the thing I inevitably get asked is this: — Astronomer? Jesuit? Are You Going to Baptize an Extraterrestrial??

I mean…. there aren’t any extraterrestrials. At least, none that I know of. And even if we do encounter them someday, it’ll be a long time before we can converse with them well enough to, say, discuss the theology of the Trinity. I have a hard enough time talking with my own family. 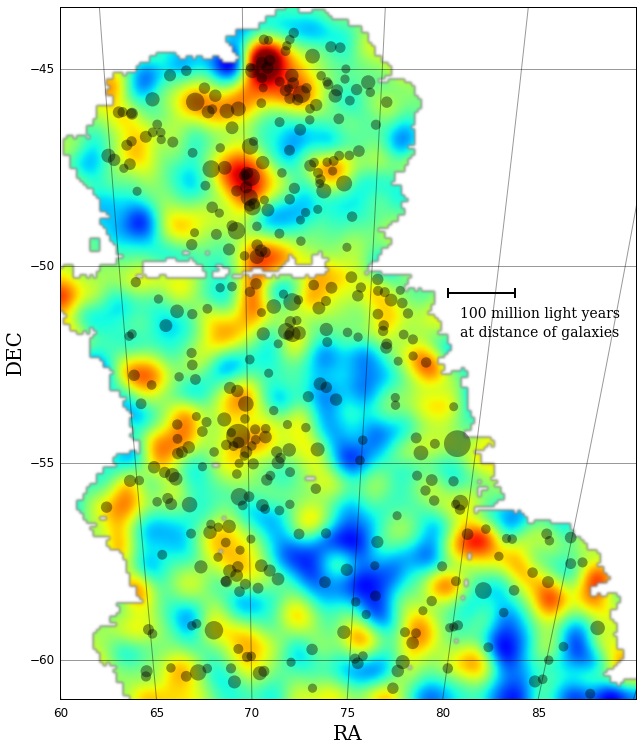 This is the first Dark Energy Survey map to trace the detailed distribution of dark matter across a large area of sky. The color scale represents projected mass density: red and yellow represent regions with more dense matter. The dark matter maps reflect the current picture of mass distribution in the universe where large filaments of matter align with galaxies and clusters of galaxies. Clusters of galaxies are represented by gray dots on the map – bigger dots represent larger clusters. This map covers three percent of the area of sky that DES will eventually document over its five-year mission. Image & caption text: Dark Energy Survey

But I know where the question is really coming from. Astronomy pulls us out of our comfortable day-to-day life here on Earth and it reminds us that the universe is a lot bigger than just me. And so there’s a little bit of a question, a doubt, a fear, that maybe the things we think are the most important to us — our lives, our loves, our religion, even our God — might seem ridiculous, or at least less trustworthy, in the face of this enormous universe.

On the other hand, any God who can pick me out of this enormous universe and find the time to care for me, with all my puny failings, must be a pretty amazing God. I wouldn’t want to worship anything less.

Today, as graduates of Georgetown University, you too are about to launch yourself into a world that is a lot bigger than this universe, this university, where you’ve been living over these past years. All the ways of thinking and acting that you’ve worked so hard to become comfortable with, all the lessons you learned in the classroom, in the dorm room, on the basketball court or the chemistry lab, about how to write a paper, how to survive a roommate, how to catch a nap in the middle of a busy day… how are those going to play out in the wider world you are entering?

There are a lot of aliens out there; and not just people who went to Syracuse or Notre Dame. Will what you learned here, cut any ice with them? Are you prepared to survive the encounter — much less, on occasion, baptize them into your way of thinking?

Well, as a Jesuit and a Jesuit product myself, let me assure you: oh, yeah. You’re ready.

Being a person for others, really works.

What you have learned here is that you never need to be afraid of the truth. But you should never think that your comprehension of the truth is ever finished or complete. The truth is often hidden, like dark matter, never seen directly in itself, but manifest only by the ways it changes the things we do see.

And the biggest challenge, of course, is that these truths you have learned will come into play in ways you may not recognize at first. Everything you have learned may be true, but it may look nothing like you expect when you meet it in the flesh.

Of course, that’ll probably also be true of the aliens, when we meet them. If we ever meet them.

Go out and find them! Be ready to baptize them… and maybe, be ready to undergo a few conversion experiences of your own. Be ready to be surprised.

38  |  Meteorites, Ice, and Antarctica: A Personal Account of William A. Cassidy