And then I wrote… this piece I prepared for the golden days of Live Journal, back in 2012, but I think I might have been afraid to post it there. Nowadays, I am not so picky…

A couple of years ago, a Jesuit I know who sits on the board of the Catholic Encyclopedia suggested my name to them as someone who could write a couple of articles for them… a thousand words on Astronomy. Another thousand on Cosmology. And another, on “The Big Bang”. 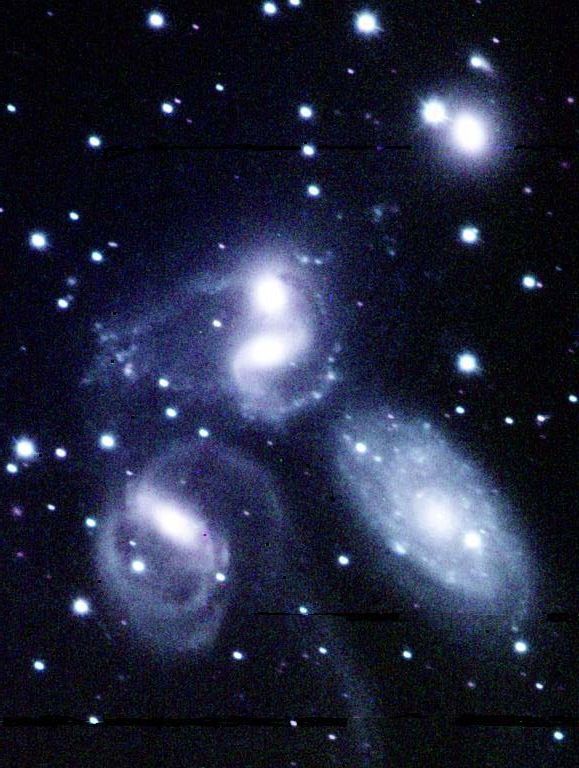 Stephan’s Quintet, a galaxy cluster. VATT image. This has nothing to do with cosmology, but it’s sure pretty!

The fact is, of course, that I am not an expert on any of these topics. But an introductory article? Only a thousand words? Come on… not only did it look to be easy, it was just the sort of challenge I can’t resist. I will write a thousand words on any topic, at the drop of a hat.

For the level they were looking for, I was confident (justified or not) that I could do an adequate job as far as the facts were concerned. And I could do it at a level that was appropriate (indeed it’s always good not to be hindered by knowing too much, all you really need to be is just a little more informed than the reader). And I could write it more clearly and more quickly and more painlessly than any of the experts whom I did know… like the other guys in my community who really do study cosmology, the big bang, or astronomy.

And, so far as being able to produce something adequate for the task on an easy timescale is concerned, I was right. The three articles flew off my screen. There were few glitches. (You want references as well? Hmmm… quick, where can I find a source for all this “stuff everybody knows”?)

I even got a chance to score a point or two with the articles that resulted. I remember being in a conversation at a meeting with someone who knew even less than I did about cosmology, and when he challenged me on some particular point I was able to cite an entry in The Catholic Encyclopedia to support my case! (After he was duly impressed, and backed down, I couldn’t resist sharing the joke… that I’d written the article.)

But for these sins of presumption, I have been forced to pay…

The first stroke of revenge against me is the obvious one: Catholic Encyclopedia is now asking for another couple of articles. One thousand words defining “The Universe” (presumably with three examples) is due on April 23rd. Another article, on Entropy, is already submitted.

But the more serious problem comes to me in the email. A crazy Hungarian who knows me from who knows where, will write me at least two times a week:

Please let me, the cosmology of John Barrow is  interesting/useful  to you???

Please help me by an information: at MIT works Max Tegmark, let me did you  find important his Mathematical Universes Hypothesis” -MUH-??? I know you studied and worked there, perhaps you know him…

And then this one:

My laptop tells me that I have received more than 80 of these messages since last November.

Some of the people he asks about, I actually know a little… George Ellis, for example, works with a fellow Jesuit at our observatory. Most of them, though, I have never even heard of.

It’s not just that I can’t answer his questions. It’s that his questions make me realize that I don’t even know the players in the field. It’s not that I may be misleading any readers. The amount of content you can fit into 1000 words is so low that I don’t have much opportunity to be too misleading. But the embarrassment to myself to have to admit that I don’t even know the literature, at all, is a constant reproach to my hubris in writing these articles.

On the other hand, the checks from the Encyclopedia haven’t bounced. So, let’s see, what can I say about The Universe…

58  |  Pronouncing the Names of the Moons of Saturn…