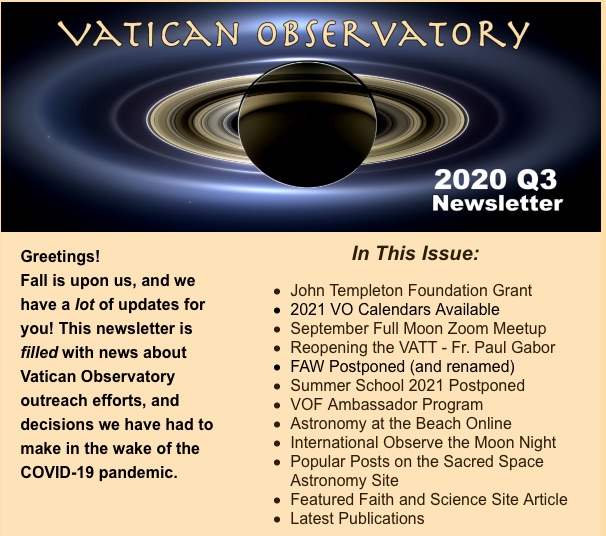 Our newsletter went out earlier this month. If you didn’t get a chance to read it, clicking on this image (or the link in the text) should take you to it.

First a bit of the regular news…

Our  newsletter went out on the first of the month that has lots of news, in fact.

The VATT is back in operation after the summer scheduled shut-down; a bunch of scientific papers have been accepted from our gang; and we’re planning on our Astronomy for Catholics in Ministry and Education Workshop (ACME… formerly known as FAW) to occur in January 2022, a year later than originally scheduled due to… you know the rest.

[Oh, and did I mention, the Calendars are available?]

We have also had a couple of new remembrances added to the Coyne Memorial. Go take a look!

Our Moon-thly Meet Ups are not affected by any virus, thank heavens. These are where our Sacred Space subscribers can chat with Vatican astronomers. As you know, we hold them every Full Moon (as visible from Tucson). Our next will be Thursday, October 1, at 10am Tucson Time/1pm EDT. It’ll feature VATT astronomer and a very old and dear friend of mine, Dr. Larry Lebofsky. I first met Larry when we were both students (me an undergrad, he a grad student) at MIT nearly 50 years ago. We share many things in common, as it happens, including both of us having papers written in the 1970s that eventually led to a certain NASA probe being sent into the asteroid belt to check out what we’d found. (Oddly enough, though the papers were on very different topics, it was the same space probe that checked out both of our ideas.) Tune in to find out more!

Speaking of Sacred Space subscribers… last month we had 213 users; this month the number has grown to 216. Thanks! Meanwhile, we now have 10,432 people who get notified of new postings, net increase of about 40 new readers… fewer than usual, no idea why. Please tell more people about our site.

And tell your friends about the site! Maybe you could make a deal with your annoying brother-in-law who’s supporting That Other Candidate and both of you send your money here, rather than helping them pay for a fraction of a second of one more annoying ad.

I started this out by mentioning the newsletter. The lead article is about a grant we got from the Templeton Foundation to modernize our web presence, and we’ve done a lot of work on this already though little of it is visible yet. One thing you may have noticed is the new logo that appears on our Twitter and Facebook feeds. This does not replace our famous “three domes” but it’s an abbreviated version designed for tiny places on the internet where fewer pixels are available. (Someone complained that the little logo without the domes didn’t have a cross… good grief, it has five crosses!)

To see how it fits into the other designs so far, read on…

The plan for our redesign is to have all the different Foundation websites talk to each other more easily, with a common design and font. That’s a lot of work; that’s why we have professionals doing it (and paying them from the Templeton grant).

But the first thing is our  new, cleaned-up version of the Three Domes logo.

There is one obvious difference, in that the stars are slightly moved. The new location of the stars matches the locations of the stars in the little abbreviated logo. But there are other, more subtle differences… including a nice font that is distinctive without being annoying.

No, they did not suggest using Comic Sans!

Before we settled on the final placement of the stars, they also came up with suggestions for where the logo might be used. Is there any interest in having stuff like these available for sale? We don’t want to get into the business of selling stuff ourselves; not only don’t we have the staff to handle orders, we also don’t want to get into calculating sales tax, etc. But there are online sites that handle such matters for groups like ours. Should we look into this? Let us know! 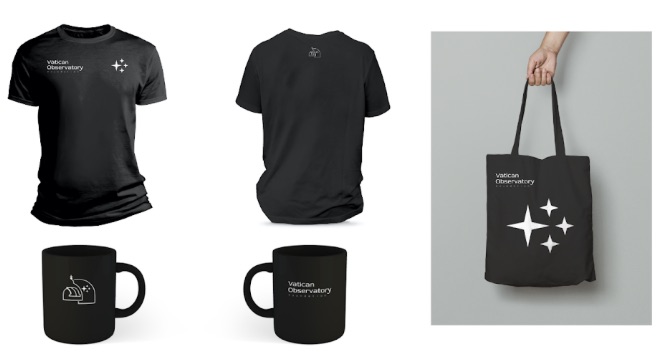 So, should go to the effort to have tee shirts and coffee mugs made up with our new logo?