Research is done at the Vatican Observatory.  Some of that research is done by yours truly.  In this post, I share some of the nuts and bolts of that research with Sacred Space Astronomy readers, and especially with subscribers, as those readers who are also subscribers actually help fund the operation of the Vatican Advanced Technology Telescope, or VATT, on Mt. Graham in Arizona, and its associated programs.

My main area of research these days is the history of astronomy; that’s been my main area for roughly 15 years now.  Currently I am working on a paper about three astronomers from the 17th century.  These are Galileo Galilei, who of course you know, and the Jesuit astronomers Andreas Tacquet and Christoph Scheiner.  Scheiner you might know from his battle with Galileo over sunspots.  Tacquet you probably have never heard of.

I heard of Tacquet thanks to the English scientist Robert Hooke, who worked in the late 17th century.  You may know Hooke from “Hooke’s Law” regarding forces in springs, or from his early work with microscopes, or from Isaac Newton’s famous dislike of him.  In 1674 Hooke published a book in which he mentioned Tacquet and Giovanni Battista Riccioli, S.J., as being two of the greatest opponents of the Copernican theory.  Riccioli’s science-based opposition to Copernicus has been one of my main areas of research over the years, so of course I had to check out Tacquet, given that Hooke mentions him and Riccioli together. 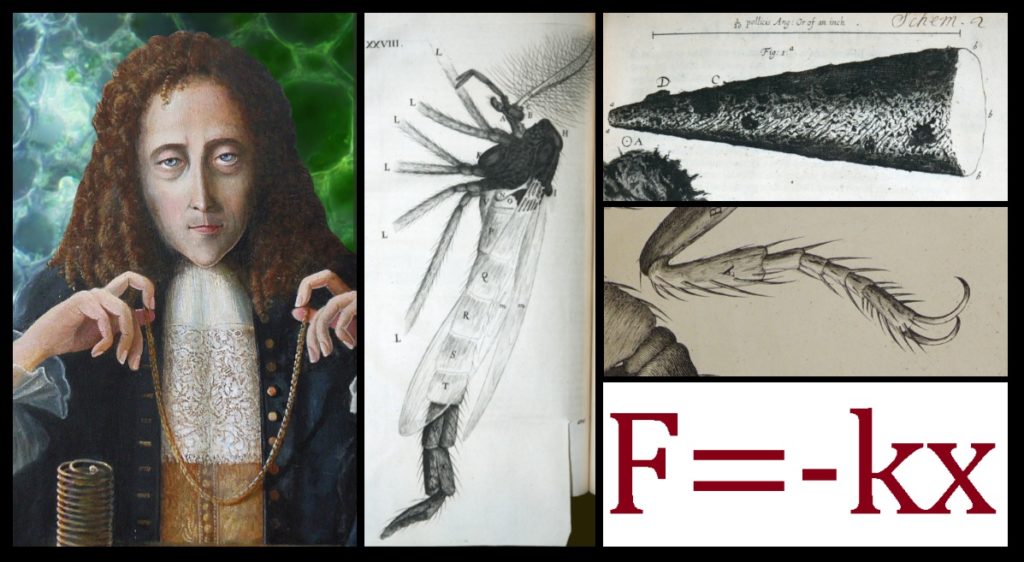 No portrait of Robert Hooke still exists. The artist Rita Greer read descriptions of him written by people who knew him, and made the painting at left of what she imagined him to look like, based on those descriptions.  Also shown here are some of Hooke’s drawings of insects and a needle point viewed through a microscope, and “Hooke’s Law” in equation form.

I dug up some of Tacquet’s work and translated it (it’s all in Latin, of course) to see what he has to say.  Tacquet makes an interesting and elegant scientific argument about the problematic nature of stars and of the starry universe in the Copernican theory—an argument I had not heard before.  And, in just a single sentence, Tacquet makes an interesting comment about how Galileo talks at length about the problems that stars create for Copernicus, but that all Galileo’s talk was of no use—that despite how much Galileo said, he did not address those problems (these being problems that arose given the understanding of stars that existed at the time; the problems were eventually solved, but long after Galileo, Scheiner, and Tacquet had died).  This prompted me to take another long look at Galileo’s work.

Galileo’s stars discussion is in his Dialogue of 1632—the book that got Pope Urban VIII and the Inquisition into an uproar.  This stars discussion itself is focused on the writings of Scheiner, and specifically on Scheiner’s 1614 book Mathematical Disquisitions.  Well, I’m the guy who translated Disquisitions into English, so of course this is all just right down my alley, so to speak.

The result is that I am working on a paper about the work of these three men.  There is a back-and-forth going on between Galileo and these Jesuits over the nature of stars in a Copernican universe: Tacquet is criticizing Galileo who is criticizing Scheiner… sort of.  Why “sort of”?  Because Galileo seems unclear on where he stands.  The Dialogue is written as a dialogue (duh) between three characters: Salviati, who is pro-Copernican; Simplicio, who is anti-Copernican (and references Scheiner a lot); and Sagredo, who is a “neutral party”.  Usually Salviati is the smart guy in the dialogue, and Simplicio is the dumb guy.*  However, in this stars discussion it is Simplicio who becomes the smart guy, while Salviati speaks astronomical nonsense.  It’s all very interesting.  We see here a debate taking place in which the usual certainties that we today imagine to exist in “The Copernican Revolution” are not so certain.

I have completed a working draft of the paper and submitted it to a journal.  The draft has made it past the editor—although I had to make some changes first, as the editor thought I had too much technical jargon in the paper for the journal’s audience.  (Hey, whether Salviati is making scientific sense, for example, is a technical matter, but the Galileo story is a historical matter; I find it difficult to both provide the technical information needed to explain concepts and be not so technical as to lose the more history-oriented members of my audience; indeed, you may have noticed that even in my posts.)  The paper is now out for peer review.

But if you are gung-ho enough to be interested in this research, you can read the working draft by clicking on the link below… but only if you are a paid-up member of Sacred Space, and logged in as such (if you are not, the link will not be visible).  The paper is not short—36 pages with 9 figures!  Enjoy a look at the very cutting edge of knowledge!  🙂

And thank you for your support of the Vatican Advanced Technology Telescope!  If you think research like this is cool (you aren’t going to find this research anywhere else), then tell others who might support the VATT, too.

*One hypothesis that has been offered for why Galileo got in so much trouble over the Dialogue, and especially for why the pope got so mad at him personally, when they previously had been friends (in a 17th-century way), is that Galileo put some of the pope’s own words in the mouth of Simplicio, the “simpleton”, and the pope took that as an insult and a betrayal.