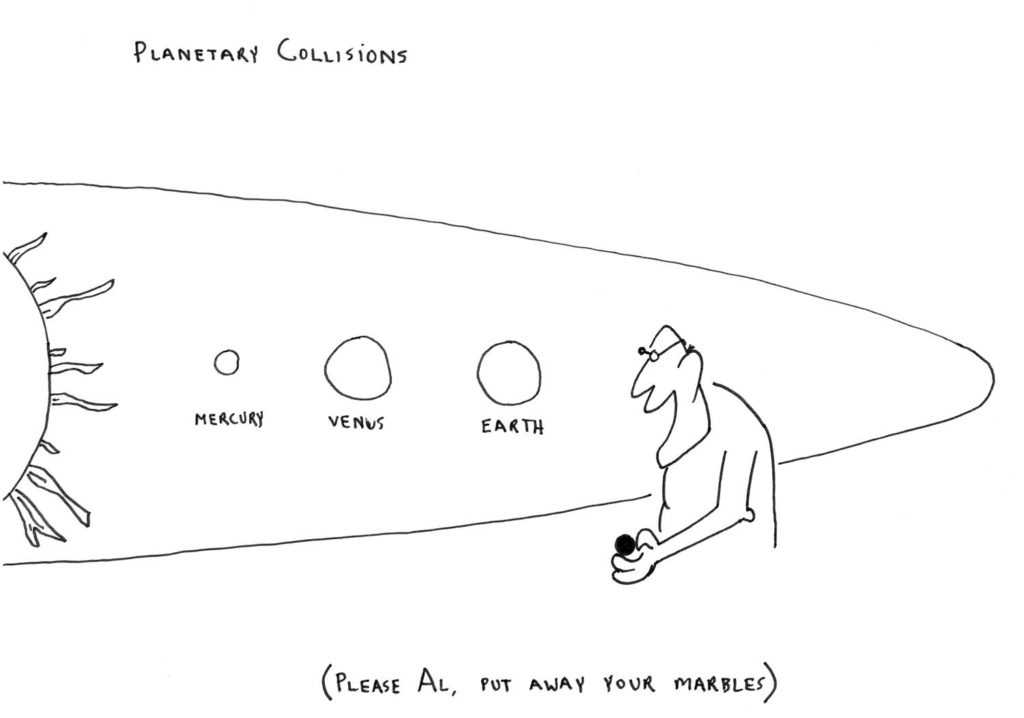 I wish I had kept track of who drew this cartoon of Al Cameron, modeling the role of giant impacts in the formation of the planets… I think I got it from Stu Weidenschilling

In 2005 I was honored to be one of three scientists invited to contribute to a lengthy obituary for a great scientist whom I once worked for, Al Cameron. We had some fun with it, simply because Al was such an amazing (and talented) guy. To name just three now-commonplace ideas that he was responsible for:

1. He was a pioneer in the theoretical calculation of how elements are made in stars, a field now called “nucleosynthesis”

2. He applied his “s-process” nucleosynthesis theories to elements found in both stars and meteorites, and thus based on a combination data from the spectra of stars and the composition of primitive meteorites recalculated our estimate of the abundances of the elements in the universe.

3. He worked out in detail the first physical theories for the structure and evolution of the gas clouds called “solar nebulae” responsible for the formation of stars and planets, and was one of the original proposers of the theory that the Moon was formed in a giant impact of a planetesimal onto the Earth. (In my very first scientific conference, on planetary satellites at Cornell the summer of 1974, I witnessed him and Bill Hartmann presenting their various versions of this theory. It was more exciting than even a science fiction convention!)

The resulting obituary, coauthored along with Bruce Fegley and David Kring, ran in Meteoritics and Planetary Sciences in 2006…