All Jesuit communities have great libraries. I think it is in the Constitutions…

And then I wrote… Along with being interviewed in a literary blog (see the past two weeks) the year 2009 also saw me preparing a number of blog posts for a once-popular blog site called Live Journal. (Who would have thought that “blogs” would have disappeared so quickly? Another thing to blame on Facebook…) Most of what I wrote was ephemeral, but a few items are worth taking another look at.

And the year 2009 was also the year that the Specola moved from its quarters of 70-odd years to new quarters in the Papal Gardens. Moving is never easy; especially when it means moving books that look so enticing to read. This one was a biography that, at first glance, has nothing to do with astronomy, but a lot to do with fame.

“He believed he was founding a tradition where he was merely leaving a gracious memory.” (from Evelyn Waugh’s biography of Ronald Knox)

One of the dangers of moving house is that, in packing up books you stumble across interesting volumes you might never have noticed before. I found Waugh’s biography of Knox on our shelves and picked it up as a curiosity but it has become my spiritual reading for the month… a lesson in humility, on the passing of fame, and on the importance of doing the little things well simply for their own sake, and not trying to find your immortality in some imagined memory of history. 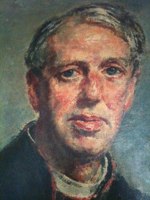 From a Tablet article about great English Catholics

If you are not familiar with Ronald Knox or his brothers, that’s no surprise; and Waugh’s 1959 biography is certainly not the place to start. (For that, I recommend highly Penelope Fitzgerald’s 2002 work, The Knox Brothers). But the Waugh book is fascinating, as a reflection on a man who was already a period piece, in a book that is today just as dated in just as fascinating a way.

Knox was one of those many characters of letters from between the wars who were so well known in his time, so utterly forgotten today. Waugh himself, of course, would have been another such example were it not for the television miniseries version of Brideshead Revisited. I suspect he would have loathed the irony… but appreciated Irons. Among others in that crowd would be the Jesuit philosopher Martin D’Arcy (who was a great friend of Bertrand Russell and would debate him on the BBC); Hillaire Belloc and Maurice Bering (remembered mostly now for being friends of G. K. Chesterton, himself remembered mostly for his Fr. Brown stories)…

For that matter, though we all know the names, who nowadays actually reads Chesterton’s more famous friends, George Bernard Shaw or H. G. Wells? And they are mostly known for their lighter works, not what they considered serious.

In the Jesuit library at St. Joseph’s University, Philadelphia, is a privately published book from a Georgetown professor in the 1960s who collected the anecdotes of Martin D’Arcy, visiting Georgetown for a year late in his career. D’Arcy was apparently both a great storyteller, and a great namedropper.

One such story involved a time in the 1930s when D’Arcy ran the Jesuit residence, Campion Hall, at Oxford and Ronald Knox was the Catholic chaplain. One day, it seems, Ronnie invited Martin over for a talk – Hillaire was going to be speaking and of course G. K. and the gang would all be present… but the joke was to be on Hillaire. He had chosen as his topic the origin of words, a topic about which he knew very little, though that never stopped him; but Ronnie had invited a professor of philology who happened to be a Catholic to sit in the audience.

At this point, D’Arcy (who had rattled off the names of Ronnie and Hillaire and G. K. without explanation) paused to spend a paragraph explaining who this obscure philologist was; a fellow named Tolkien…