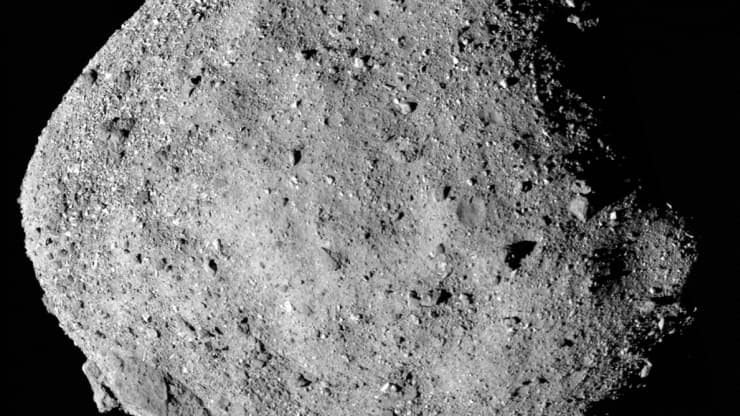 First — congratulations to the OSIRIS REx Team for their successful “tag” of asteroid Bennu! As you may know, this asteroid mission is headquartered here in Tucson at the University of Arizona. Several members of the mission have worked closely with us; some have been scientific collaborations with Fr. Kikwaya and myself, they have given our Faith and Astronomy Workshop participants tours of the headquarters, and their spokesperson Dolores Hill was the keynote speaker at our annual seminar in February. The mission was the brainchild of the late Dr. Mike Drake, and I was Mike’s first graduate student, a (cough) few years back. After Mike’s sad death, Dr. Dante Lauretta took over the mission; his PhD director was my friend Bruce Fegley, whom I knew when we were undergraduates together at MIT.

It’s a small world. But then, so’s Bennu.

The other big news for us at the Specola here in Tucson this month — besides the fact that I now need a sweater to go out for my morning walks, even though the temperature is still over 90 during the daytime — is that finally Fr. David Brown has been able to join us here from Rome.

Ever since he got his doctorate at Oxford, David has been working in Castel Gandolfo; but as his research projects have grown and evolved, it became clear that the time was ripe for him to move to Tucson, with access to both our telescope and to the other astronomers at Steward Observatory. He was supposed to be here this spring, but…

Want to know more about him? He’ll be the guest at our “Moonthly” Meet Up on Saturday, October 31, at 10am Tucson Time/1pm EDT. We’ll provide a link, a week ahead of time, to our Sacred Space subscribers.

Speaking of subscribers… our numbers grew to 217 over the past month, but now is the time of year when a lot of subscribers are cleared from the system so that drop off will be reflected in our count next month. Be sure that your credit card is current if you want to keep getting access to these posts, and the Moonthly Meetups. Thanks!

Meanwhile, we now have 10,486 people who get notified of new postings, net increase of about 50 new readers… welcome to all of you. Tell more people about our site! And if you can, please join the Sacred Space gang at a rate of $10 a month (if you’re like me, you’re trying to shed those Covid pounds by cutting back on at least that much in coffee and donuts every week!) or $100 per year.

Also, just a reminder, it’s always worth keeping an eye on the Coyne Memorial, as more memories are added all the time. And for those of you who like round numbers, I note that we are only $121 shy of reaching $70,000! When we hit $100,000 we’ll publish these reflections as a part of a book of George’s most notable popular articles and scientific papers.

[And remember, the Calendars are available! Never too soon to think of Christmas shopping…]

These diaries are designed for our supporters, and so I like to include some “inside baseball” news about our doings here. This month, in honor of David Brown’s shifting home home base, I thought I would describe a bit about how we decide among the dozen astronomers at the Observatory who lives where. It’s one of the trickier jobs that I have as director. Obviously, some decisions are easy… Bob Macke is the curator of meteorites, the meteorites are in Castel Gandolfo, and so that’s where Bob is. But in other cases, it’s not quite so obvious. Yes, we have the telescope here in Tucson; but Tucson also has the advantage of having one of the largest populations of active astronomers in the world, with several hundred of them working at both the Lunar and Planetary Lab and the Steward Observatory of the University of Arizona, plus the non-profit Planetary Science Institute, just to name the major players. So why wouldn’t everyone want to join the gang here? The reasons can be personal, professional, and political… and historical… 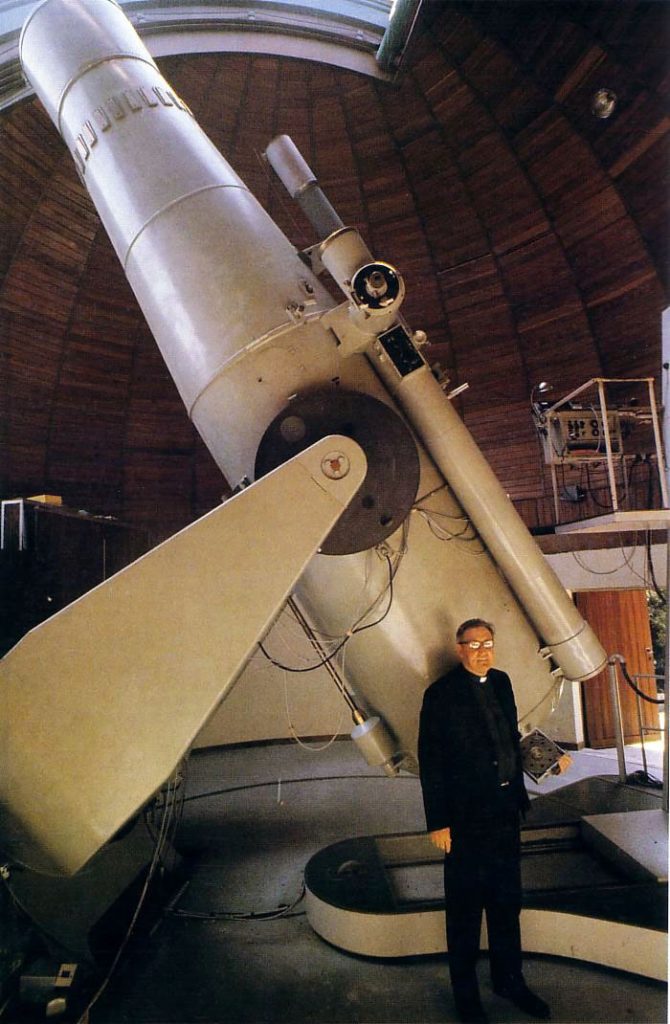 The Vatican Observatory was facing a crisis in the early 1980s, soon after Fr. George Coyne became the director… first of all, the majority of the staff had joined as young men (all men, they were all Jesuits) in the mid 1930s and so they were all approaching retirement age. But the nature of how science was done had changed in the meantime; no longer would everyone work together on one project, like the old spectra lab. The other problem was encroaching light pollution; the last useful observations on the Schmidt telescope (which was in operation for less than 20 years) took place in the early 1980s, but by then it was clear that observations of the deep sky from Castel Gandolfo were no longer possible.

After looking at other possibilities (joining the European Southern Observatory, or finding a darker site in Italy) the easiest solution was just to buy a house in Tucson and rent offices at the University of Arizona, where a number of the Jesuits already had collaborators. Then the chance came in 1985 to build a new telescope on Mt. Graham, what became the VATT. So by the time I arrived, in the early 1990s, most everyone doing science had moved to Tucson. The only folks left in Castel Gandolfo were “three old cats” (as the Italian idiom had it).

But that led to political problems with the Vatican itself. Out of sight, out of mind… without a presence near Rome, it was easy for the decision makers downtown to forget that we existed. Plus, we still had some outstanding assets in Rome… not only the meteorites, which I mentioned above, but also the extensive library (including a large collection of historic books and journals), the collection of photographic plates of the sky from the beginning of the 20th century, and the location itself which was an ideal place for workshops and schools. So the word went out to the Tucson astronomers to at least try to spend some significant time in Castel Gandolfo.

Partly because of our lack of visibility, the powers that be at the Vatican thought it would be trivial to move us out of our location in the summer Papal Palace. By this time, Fr. José Funes was director, and he realized that just shunting the old three cats into a dilapidated building in the gardens would not be a good solution. He fought, successfully, for a new an expanded set of offices in the papal gardens. The Vatican Observatory in Castel Gandolfo went from being “three old cats” to a “flower in the lapel” of the Vatican… a place that they were proud to show off to important visitors.

In addition, Fr. Funes was quickly following up on the groundwork that Fr. Coyne had set up of recruiting young staff. The fact was, even after expanding our living quarters here – twice – there wasn’t enough room in Tucson for all these young guys to have places to live, much less offices on campus. So building up the community in Rome was not only politically expedient, but practical as well.

One other thing made a big difference: the internet. As we have discovered even more in this age of Zoom, you don’t need to be physically in the same place as your collaborators to get work done. It’s possible to have active collaborations even on a hilltop an hour from Rome. The world has truly become small!

Today, the division of the staff follows several principles. First, what are the desires of the astronomers? If they have a strong preference for one or the other, we try to follow that. Next, practical; if your main work is observing on the VATT, you’d better be in Tucson. If your education was in Europe and your colleagues are mostly there, then that might influence your decision of which continent to live on. But there are intangibles as well… how good are you at languages? If Italian is impossible for you, then living in Rome would be tough. How much do you need the active interaction of going to weekly seminars? Tucson is the place for that, though there is a lot more astronomy going on around Rome than there was 25 years ago. Finally, it’s always good to have native Italian speakers available in Rome to give press and television interviews, direct tours of school groups, etc.

Below is a summary of the full time astronomers at the Vatican Observatory… of the group, the Tucson staff include Rich Boyle, David Brown, Chris Corbally, Paul Gabor, and Jean Baptiste Kikwaya; the Rome staff include Richard D’Souza, Gabriele Gionti, Bob Macke, and Alessandro Omizzolo. Paul Mueller and I split our times 50/50. Given the criteria I mentioned above, can you see why each of them is located where they are? 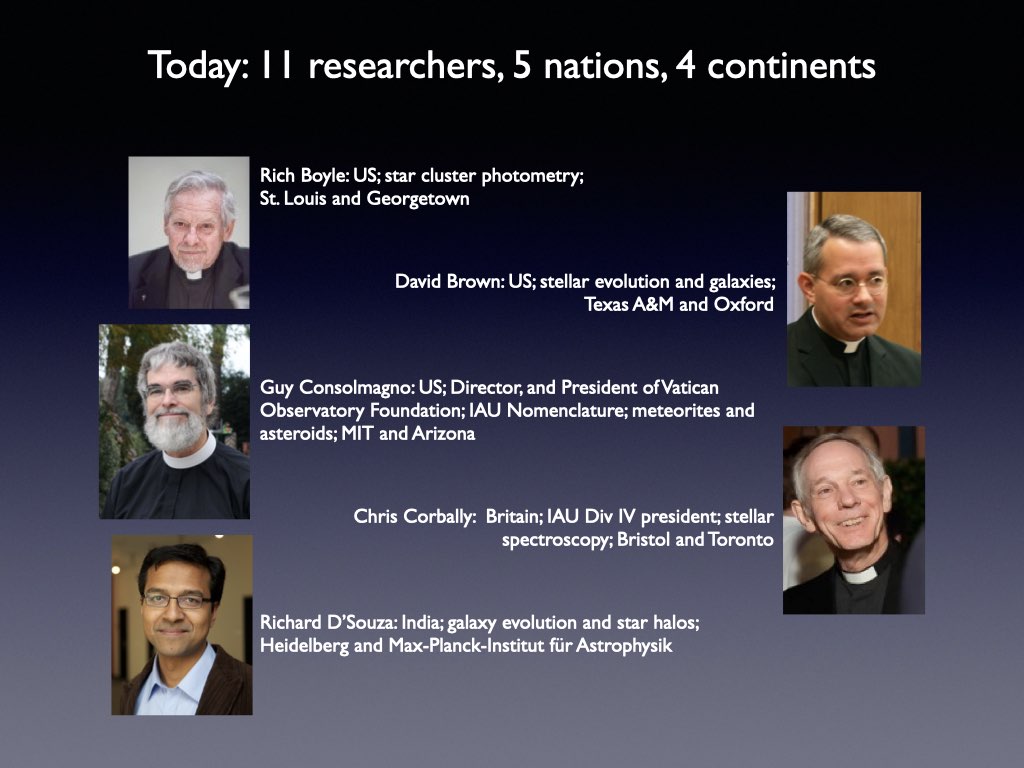 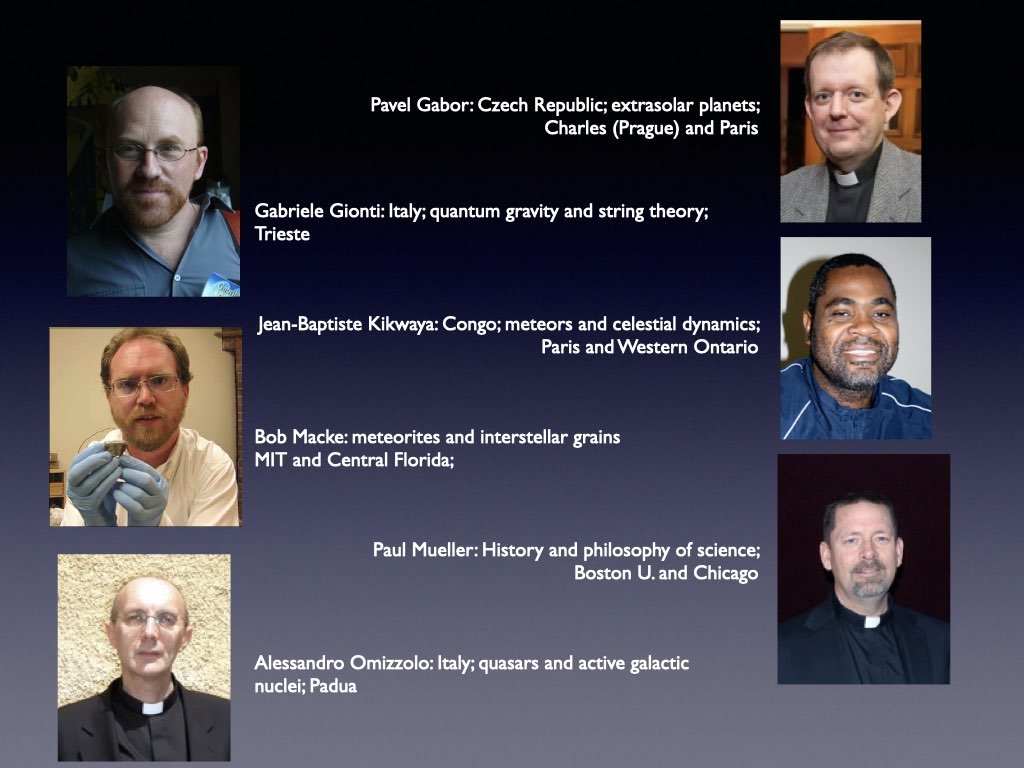 Finally… I mentioned last month the folks who are redesigning our web site. It’s a major project (thank heavens Templeton is paying for it) and you probably won’t see any changes until the new year… which is closer than you think! But one suggestion they had is that folks like you who have been supporting us might want to get goodies like tee shirts or coffee mugs as a thank you when your donations reach a certain level. Does that sound interesting? Would getting a mug inspire you (or a friend of yours) to sign up or increase your donation level? Would it be a good conversation starter?