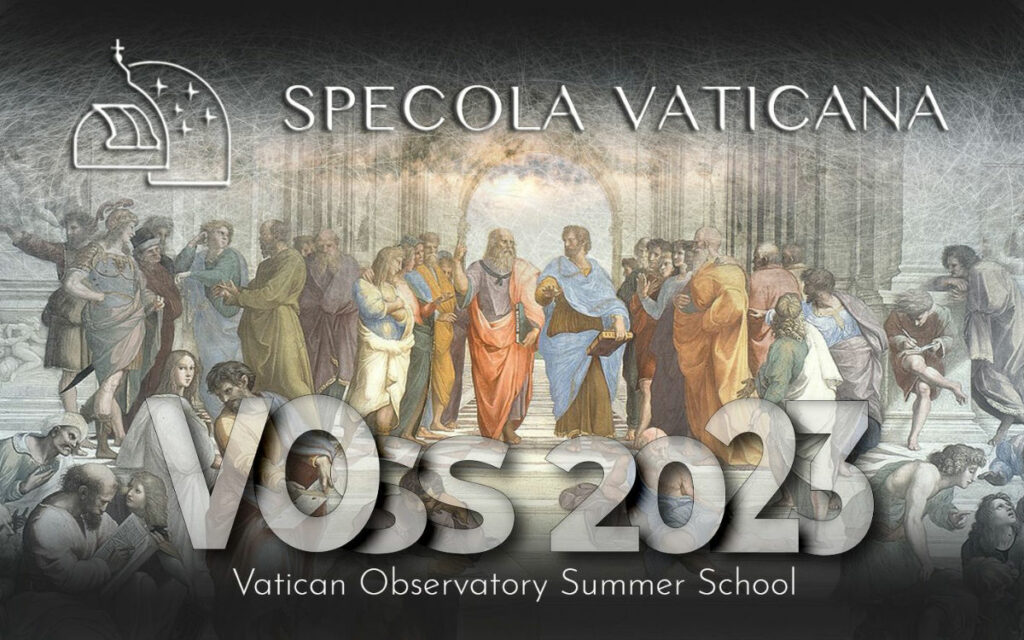 The Vatican Observatory Summer School returns in June of 2023!

We’re back! After a five year hiatus (thanks to Covid) our signature Summer Schools will return to Castel Gandolfo in 2023.

These summer schools are one of the most important works of the Vatican Observatory. Since 1986 they have touched the lives of more than 400 young astronomers, not to mention their friends and colleagues once they have returned to their home countries. And they have always been strongly supported by the Popes; nearly every summer school has been granted a private audience with His Holiness.

This 18th Summer School in Castel Gandolfo, Italy will feature the concepts of Big Data and Machine Learning, and provide students with hands-on data analysis experience that they can use with their own projects.

Recent cosmological surveys, like the Gaia mission, have collected enormous amounts of data; with new instruments coming online, and an ever growing number of objects being observed, “Big Data” will likely become the norm, and astronomers will need new ways to analyze these data sets.

The 2023 Summer School will discuss these surveys, and show students the tools for accessing these data, performing data analysis and running numerical simulations.

How to apply, how to help

The Vatican Observatory Foundation has taken over full responsibility for funding these schools. The typical cost, including travel, lodging, and expenses during the school, comes to about $4,000 per student. If you’d like to help support a student, in part or in whole, click here:

Donate to the VOSS

Applications to attend the school are now open. To attend, you need to be a student beginning graduate level studies, or in your final undergraduate year, in physics, astronomy, or a related field, with the clear intent to continue working in astronomical research once you have gotten your degree. To apply, click here:

More About the School

The Vatican Observatory Summer School is open to advanced astronomy undergraduates and beginning grad students from around the world. A majority of the students selected come from developing countries. Tuition is free, and significant financial support ensures that every student accepted is able to attend. The Summer School has over 400 alumni from more than 55 nations – many of whom are now at prestigious institutions around the world!

Among our notable alumni are Ray Jayawardhana, Harold Tanner Dean of the College of Arts and Sciences, Hans A. Bethe Professor and Professor of Astronomy at Cornell University; and Heino Falcke, a key player in the Event Horizon Telescope that first imaged the shadow of a black hole.

The faculty are among the most notable astronomers of their age, drawn from leading observatories and universities around the world. Among them have been Vera Rubin, winner of the 2002 Gruber Cosmology Prize; Frank Shu, later president of the National Tsing Hua University in Taiwan; Michael A’Hearn, the Principal Investigator of the NASA Deep Impact mission to Comet 9P/Temple; George and Marsha Reike, principal scientists on the infrared cameras carried by the James Webb Space Telescope; and Didier Queloz, winner of the 2019 Nobel Prize in Physics.

Viviana is an Astrophysicist with a strong interest in Data Science. She is a Professor of Physics in the City University of New York and a Visiting Scholar at the Center for Computational Astrophysics of the Flatiron Institute. She wrote a textbook on Machine Learning for Physics and Astronomy, which will be published by Princeton University Press in 2023. She has been recognized widely as a role model for women in science. In 2021, she was named one of 13 “Tecnovisionarie” Italian Women in AI by Women&Tech. In 2020, Wired (Italy) listed her as one of 50 women who are doing the history of Computer Science. In 2018, she was named one of Italy’s 50 most influential Women in Tech by InspiringFifty.
Website, Twitter, Podcast

Željko Ivezić is a professor of astronomy at the University of Washington. Željko’s scientific interests are in detection, analysis and interpretation of electromagnetic radiation from astronomical sources. Of relevance to VOSS 2023, he co-authored a book on Statistics, Data Mining and Machine Learning in Astronomy . His current obsession is the Rubin Observatory’s Legacy Survey of Space and Time (LSST), for which he was the Project Scientist and now serves as the Director of Construction. In many ways similar to SDSS, which provided to us the first large digital color snapshot of the faint optical sky, LSST will deliver a digital color movie of the night sky by collecting 100,000,000 GB (100 PB) of astronomical imaging data for about 40 billion stars and galaxies.
Wikipedia, Linked-In

Studies galaxy evolution and the impact of accreting supermassive black holes of their hosts. She has extensive experience working with large public datasets (e.g., SDSS, 2MASS, WISE, IRAS, and more). In her research, she combines dedicated observations obtained throughout the electromagnetic spectrum (e.g., XMM-Newton, Keck, VLT, ALMA, and NOEMA) with photoionization and dynamical modeling. She has significant experience in developing and applying Machine Learning algorithms to large astronomical datasets and has written a well-accepted practical review on Machine Learning in astronomy. She will be starting the Carnegie-Princeton fellowship in Carnegie in September 2022.
Website

MHC is a Maitre de Conferences (eq. Associate Professor) at the Paris Observatory and the University of Paris-Cité (France) since 2010. Since 2020, he is also Adjunct Professor at the University of California Santa Cruz. In 2018, he obtained a competitive award delivered by the Spanish Government which he is using now to spend time at the Instituto de Astrofísica de Canarias (IAC). He is an expert in galaxy formation and evolution – with main focus on galaxy statistical structural evolution using large surveys – and one of the pioneers in the use of machine learning for astrophysics. He currently leads the Machine Learning group at the IAC whose main activity revolves around the use of artificial intelligence to address the physics of galaxy formation. He is pushing the use of machine learning beyond the obvious classification tasks to explore how data-driven approaches can be used to reach an improved understanding of the physical processes governing galaxy formation.
Website, Linked-In

Francisco (Paco) Villaescusa-Navarro is a research scientist at the Flatiron Institute in New York City. He did his PhD at the University of Valencia in Spain. He then held postdoctoral positions at the Astronomical Observatory of Trieste, Italy, and the Center for Computational Astrophysics in New York before becoming an associate research scholar at Princeton University, where he holds a visiting research scholar position. Paco is the main architect of the Quijote simulations, the largest suite of cosmological N-body simulations ever run. He is also part of the CAMELS core team that designed and ran the largest set of state-of-the-art hydrodynamic simulations to-date. Paco combines the output of numerical simulations with machine learning methods to develop theoretical models to extract the maximum amount of information from cosmological surveys in order to unveil the Universe’s mysteries.
Website, Linked-In, Twitter

Br. Guy has a Ph.D. in Planetary Science from the University of Arizona – his research explores the connections between meteorites and asteroids, and the origin and evolution of small bodies in the solar system. Br. Guy lectures frequently about faith and science, and is the author and co-author of several books.
BIO

Fr. Omizzolo has a Ph.D. in Astronomy from Padua University – he studies low-resolution spectra of X-ray candidate quasars to determine the optical luminosity function of low-redshift QSOs. He also conducts spectroscopic studies of Seyfert galaxies and isolated galaxies in collaboration with professor Piero Rafanelli at Padua University.
BIO

See what students had to say about the 2018 Summer School