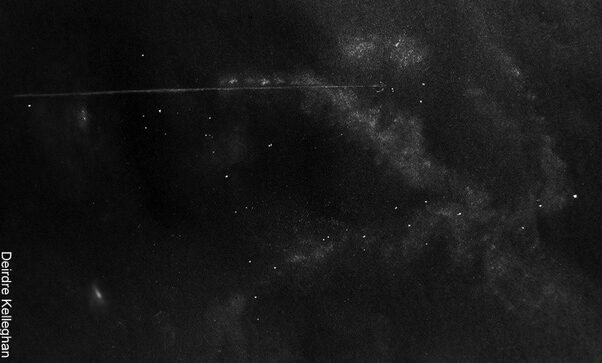 A naked eye drawing of the Milky Way with one Perseid flying through the night-sky from n Persei to a Cyg . Drawn from Co Cork Ireland by Deirdre Kelleghan August 17th/18th 2010 , pastels and gel pen on black paper

My observing location for the 2017 Perseids was flanked toward the east by a large stony hill. Towards the west  the Atlantic Ocean and to both the south and north by fields of sheep. All week the forecast was less than favourable. It was a treat to have a relatively clear sky. Between local time 22:40 ( 21:40UT) and 23:35 ( 22:35UT) I observed 19 beautiful Perseids. Two white ones to start then a stunning blue mag 3 which spanned the width of Ursa Major. The vast majority were white with the occasional dim red Perseid zipping in from the direction of Perseus. Several of the white variety matched magnitudes of 2 + similar in brightness to many ISS passes. Some of them entered directly overhead, they spurted and spluttered their smoky trails just in case they were not noticed.

On this occasion, I did not create a drawing, but simply enjoyed watching the show. The Milky way became increasingly visible as my eyes adapted to the darkness. Only the occasional headlight from a distant road or the sounds of sheep baaing in the darkness entered my beautiful silence. The knotted clouds of stars in our galaxy was clearly spilt, Vega was high, Ursa Major totally dominated the western sky.

The winter ahead would not be compromised by the suns position. On moonless nights, the milky way will find itself drawn on my page once again.

Just before midnight, I noticed the almost last quarter moon developing a glow over the hill announcing its impending presence. I retired inside for tea and a warm up, it was cold for August. On my return, high cirrus clouds surrounded the moon in folded lines. These creased clouds looked stretched, as the moon peeped over the hill.  The moon seemed to have embedded itself in them as it rose, ice crystals in our atmosphere added to the drama by producing a vivid rouge moon halo. The natural folds in these gossamer clouds streamed outward from our rocky satellite echoing in a visual way the forthcoming manifestation of the solar corona in a total eclipse.

I stood between the rising moon and the sun only slightly below the western horizon. The oranges and lemons of sunset still lingering over the ocean. Wispy clouds lit by the suns twice reflected light gathered to hide all but the brightest meteors. A wish for just one more was granted with two beautiful 30-degree Perseids one through Ursa Major and one directly overhead. 21 Perseids while viewing for pleasure was delightful. Meteor s offer the opportunity to be sharply aware of our atmosphere. That 300-mile bubble of gas that protects us from space debris and also gives us a planet on which we can live and breathe for all our lives.

More meteor showers for your pleasure:
Next meteor showers to watch out for are the Draconids October 7th and 8th 2017 ( nightfall and evening) and the Orionids on October 20th ( best before dawn)