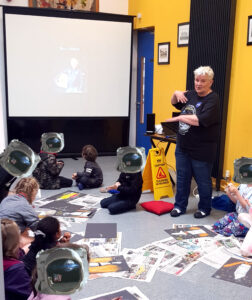 Deirdre telling the children that Buzz Aldrin and Michael Collins are still alive . This was news to them. Let’s Go To The Moon – Apollo 11 Drawing Workshop at Tubbercurry Library Co Sligo

On July 19th it was my pleasure to run two Apollo 11drawing workshops for children in Co Sligo Ireland. This was the eve of the 50th Anniversary of the Apollo moon landing.

Seeing the moon landing live on TV 50 years ago was a big deal to me. It influenced my life in many ways, it still does. Therefore being so close to July 20th, I included my workshops as part of the global celebration of Apollo 11 in the IAU ( International Astronomical Union) events list.

You can see mine and  the events from all over the world here.

Its interesting how the Apollo moon landing absolutly pulled the entire planet together as one back in 1969. A few hours of focused global awe for the achievements of three men on our behalf. We need more of that unity, we need it so much.

The first workshop of the day took place in Sligo Central Library. That venue  is actually an old gothic style church built circa 1791. Of the 16 children attending, not one of them knew the names of the men who went to the moon in July 1969. This is an increasing occurance in the last 6  years or so, therefore history being lost over time.

My workshops teach children about various space and astronomy subjects via drawing. The kinesthetic action of drawing helps cement learning. It helps children think clearly about what they are drawing, therefore assisting them to remember more information. For the day that was in it, the children did very well with their drawings. They  were keen to take part in an impromptu video statement. “One small step for man, one giant leap for mankind ” a phrase familiar to most adults but new to these little children. Click to listen to the children

They drew Buzz Aldin’s helmet and visor. In the visor, Neil Armstrong is reflected. A complex image as well as being iconic because of its content. Of all the Apollo images, it is one of the few in which both men exist together.

In a hurry to get to the second venue I left the USB for my slide changer behind. When I called them to sort it out, they had news for me. The library got phone calls from parents after the workshop. They rang to say how delighted they were with the level of detail about Apollo 11 retold by the children when they got home. Drawing as a tool for learning is so intrinsically valuable. It should never be underestimated in education.

The second venue was in Tubbercurry Community Library, about 35 minutes drive. This was a very modern library, 12 children were booked in and 4 more who were in the library joined the session.

The second drawing was to celebrate the Saturn V rocket in which the three brave men left this planet to engage with the moon. Encouragement was given to use the pastels in ways to show energy and massive power. As with the morning session, I led the way by drawing the Saturn V. In doing a one-minute drawing of the rocket in front of the children I tried to show them how to look at the task in shapes, shadows, and highlights. Showing  them how making a simple ghost image first helps them to get started. After that they can add more detail to their drawings.

After the basic story of the Saturn V and the moon landing the children started their drawings. There was great energy in the room. Colours became power as their little hands worked to express the lift-off of Apollo 11 on its journey to the moon.

Here below are a few of the drawings produced that day