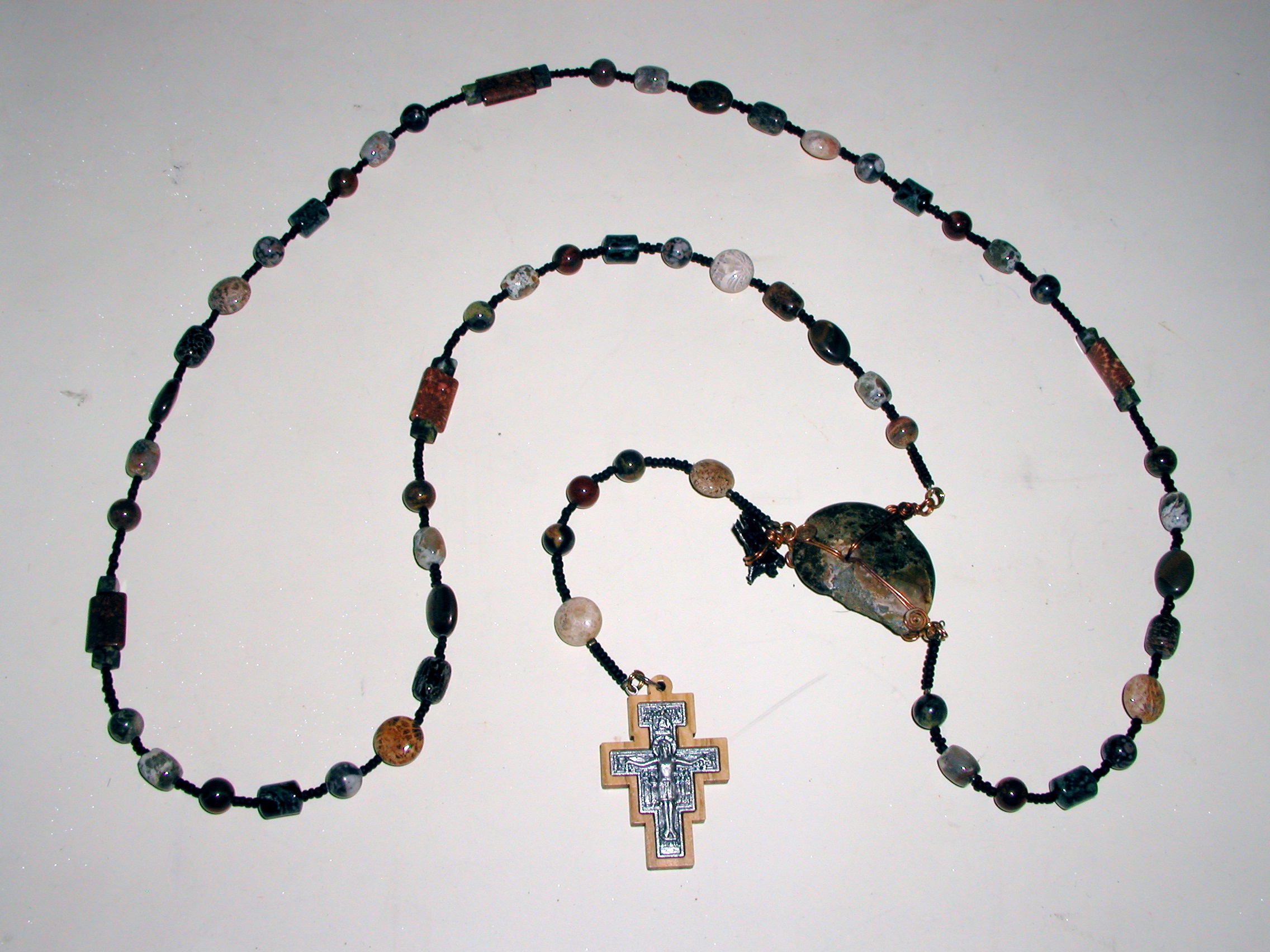 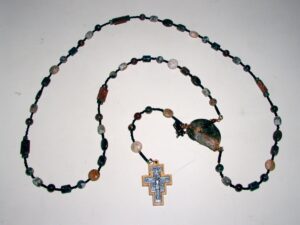 (And Then I Wrote…) I’m not sure how I first met the late Ruth Rees… who died on 3 June, 2019, at the age of 91. She was an odd bird in many ways, a little old lady who lived alone in an apartment around the corner from the Baker Street underground station – near where Mr. Sherlock Holmes used to live, of course – and in many ways she was a relic from an age almost as old as Mr. Holmes.

It may be that our original connection was through science fiction; she had a cousin who ran a Blake’s 7 fan club, BBC science fiction show from the 1960s that I otherwise know nothing about, and I had met the cousin at various British SF conventions.

Be that as it may, Ruth and I did connect and I always did enjoy visiting with her. More than ten years ago she wrote a little book about the Rosary, as one does… and she asked me to write an introduction. I was delighted to accept the challenge. This is what I sent:

The rector of the novitiate where I studied to become a Jesuit brother was a rough, gruff old priest who’d traveled around the world, facing down challenges spiritual and temporal, with a no-nonsense tough practicality. We used to call him “Yoda” behind his back. One day he described to us his first mission overseas, an assignment to build a high school in rural Chile. He’d arrived as a young priest with only a rudimentary knowledge of the language and local culture, and he had utterly no experience in putting a school together.

“I was terrified, men,” he told us. We hung on every word, wondering how we ourselves would ever survive such a test. “I was at such a loss of what to do, that I actually got down on my knees and — and I prayed the Rosary!”

We laughed, because we knew exactly what he meant. For all our developing talents in meditation and the Spiritual Exercises, it was reassuring for us novices to remember that, in a pinch, the tried and true prayers of our childhood still worked!

Alas, too few kids today are taught how to pray the rosary. They think a rosary is something you wear like a necklace, or – if they have acquired a patina of sophistication – they dismiss it as just a mechanical rote repetition of prayers, suited only for the unimaginative. But in fact it’s just the opposite. It is the foundation, and launch pad, for the deepest kind of meditation.

Yes, the rosary is mechanical. One Our Father, ten Hail Maries, a Glory Be; repeat five times. You could write it as a computer program, a few nested “do loops”, and have a machine manufacture the words for you. They are prayers we have known since childhood, repeated over and over, the beads (and the chain they’re strung on) making a firm impression as they pass through our fingers… it is rote, it is mechanical, it is physical. That’s the whole idea.

We are material people, living in a material world. We must start with the physical; we must start with our senses. The recitation of the rosary for that very reason grabs our ears and tongue and fingers and sets them busy to the physical task of praying, in order to focus our imaginations and spirits on the mysteries attached to those prayers.

This mixture of the physical and the spiritual is a constant theme in my own life as a Jesuit brother and astronomer. I study the physical universe as a way of getting closer to the One who created it. I live a life where spirituality is both real and practical. I know that the physical universe, with its black holes and dark matter, is far stranger than the mundane worries of running errands and finding supper; yet without supper, the life of the mind would be cut short quickly!

And I also know that not every flight of fancy is necessarily true. Just because dark energy is an exotic idea, doesn’t mean every other exotic idea is equally supported by the data. To quote that old atheist astronomer, Carl Sagan, they may have laughed at Einstein, but they also laughed at Bozo the Clown. It’s not enough for me that the Rosary is a quaint old custom, beautiful in its history, reminiscent of favorite old nuns from my childhood. I need a more practical reason to invest my time in this practice.

Why do I pray the rosary? Because it works.

Maybe it’s “just psychology.” Maybe just taking fifteen minutes out of one’s day, pulling away from the concerns of the instant and letting them fall into perspective, is simply good mental health. If that’s all the Rosary is, then what’s wrong with that?

But frankly, my experience of praying the Rosary has suggested to me that there’s much more than mental hygiene going on in this prayer. It has never failed to calm and center me, yes; it was there when I needed it, when shocks shook my world – from losing a close friend, to losing the World Trade Center – and other kinds of prayer seemed impossible. But it has also given me moments when God was tangibly present, in a way both good and terrifying. (“Fear of the Lord” is no idle threat!)

My friend Ruth is calling this book The Rosary in Space and Time and she’s exactly right. It is this fixation in space and time – not only the physical space and time where we pass the beads through our hands, but more importantly the specific space and time where occurred the mysteries that we contemplate – that is the genius and glory of Christianity.

Every religion wants to worship God “out there” or God “right here”, God Transcendent or God Immanent. But only Christianity has what the theologians call “the scandal of the particular”: that along with the “out there” and the “right here” we also have God Incarnate in a particular place and a particular time, doing particular things with particular people. Christ did not come to save “humanity”; He came specifically to save me; and you; and that guy on the train this morning, chewing gum, who took the seat I had my eye on.

The four sets of mysteries are each specific incidents as historically real as your twenty-first birthday, as your favorite team’s last championship. It is part of the human experience to relive the high points in our histories, national or personal, until the reliving becomes itself a part of who we are. And in just such a way, in meditating the mysteries of the Rosary, the acts of Mary and the Magi, and of Pilate and Peter, and of all the disciples who witnessed the Transfiguration and the Triumph of the Cross, become a part of our experience as well.

There is one other special meaning the Rosary has for me, however. It is a universal prayer uniting Catholics, liberal and conservative, simple and sophisticated, with the power to break down fears and prejudices across lines of culture or nationality.

As a member of the Vatican Observatory, working in the Pope’s summer home in Castel Gandolfo, it has been my privilege to meet His Holiness on a number of occasions. The general pattern of such audiences is that at the end, everyone present is greeted personally by the Pope, who hands a Rosary to that person as a memento of the visit.

One summer, soon after one of these audiences, I was visiting the Jesuit parish in Johannesburg, South Africa. While I was there, I asked the pastor if it would be possible to get outside of the city one night so I could get a look at the southern skies with the little telescope I’d brought along. He knew a parishioner who worked in town during the week but drove back to his farm in the countryside on the weekend, and arranged for me to ride out with him overnight.

The old farmer was clearly suspicious of me. To him I looked like a young bearded Jesuit scientist more interested (he suspected) in the Southern Cross than in the crucifix. As we drove onto the expressway heading out of town, he said to me, “Every Friday as I drive home, I like to pray the Rosary. Would you care to join me?” He said it like a challenge. His gruff demeanor reminded me of my old novitiate rector. This was clearly a test.

“I would be very happy to,” I replied. I reached into my jacket pocket. “The Pope gave me this Rosary just last week.”

He smiled. We prayed together. The Rosary passed the test.