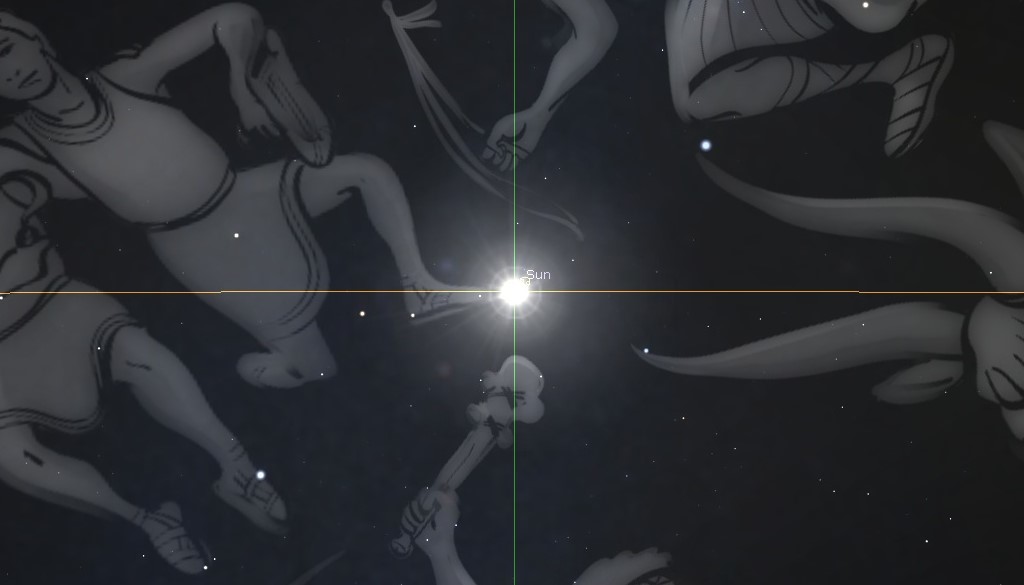 The solstice will be here in just a few days!

Over the course of a year, the sun travels through the constellations we see in the sky along a path called the ecliptic.  This path takes it through twelve specific constellations—the zodiac constellations.  These are Pisces, Aries, Taurus, Gemini, Cancer, Leo, etc.  The ecliptic is tilted with respect to the equator, meaning that as the sun moves along the ecliptic the sun also moves to the north and to the south in the sky.

In the image below, made with the Stellarium planetarium app (click to enlarge), you can see the ecliptic.  It is the gold line.  The sun is shown in the location it had on May 8, when I started working on this post.

The June solstice occurs when the sun reaches the northernmost point in its travel.  This point currently lies just off the “toe” of the twin Castor in Gemini, as indicated by the arrow in the image below.  The sun here is shown in its location for June 8.  You can see how between May and June the sun has approached the solstice point, travelling through the constellation of Taurus, and has climbed more to the north in the sky.

Since the solstice occurs when the sun reaches a certain point, that means that the solstice is not a day—it is an instant.  The sun hits that northernmost point at one moment.  According to Google, that moment is at 5:13 AM (in the Eastern time zone, USA, where my hometown of Louisville, Kentucky is located).  According to Stellarium, that moment is at 5:03 AM.  I will trust Stellarium, but a 10-minute difference is not much.  Regardless of which time is correct, the sun will not be above the horizon for my hometown.

Sanaa, Yemen (E 44° 12ʹ 24.01ʹʹ) is close, too.  Below is the sky at solstice as seen from Sanaa.  Note that, since Sanaa is considerably south of Baghdad, the sun is much higher in the sky at solar noon.

There is also a whole circle around the Earth of places where the sun is on the horizon at the solstice—rising or setting.  Using the Celestia app I can get an idea of where these places are: in northeastern USA, Canada, and eastern Brazil for rising; western Australia and perhaps the Hawai’ian islands for setting:

Where will the solstice be for you?