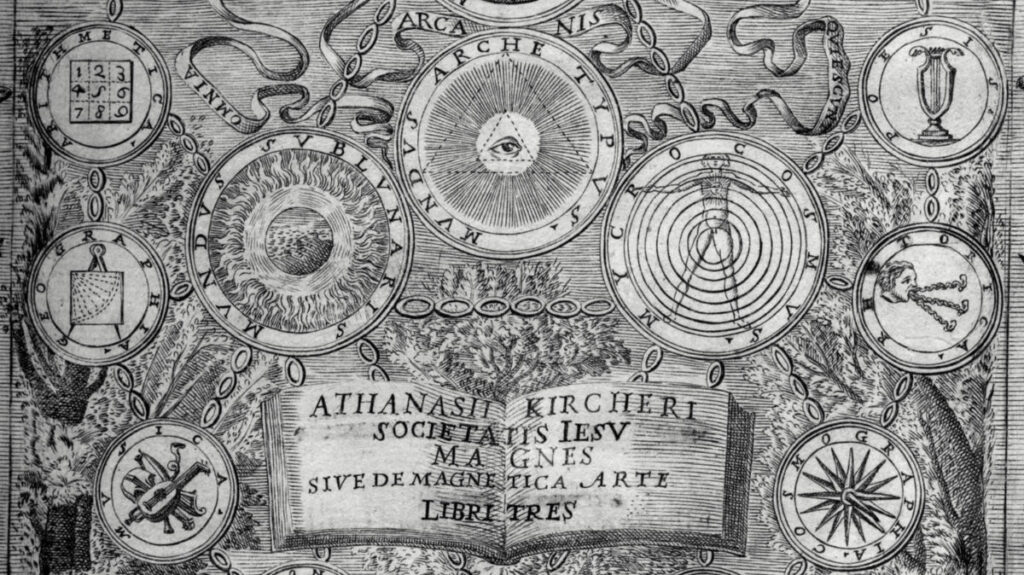 And then I wrote… In 2015 the Journal of Jesuit Studies invited me to write a review of the book The Stars of Galileo Galilei and the Universal Knowledge of Athansius Kircher, by Roberto Buonanno; translated by Roberto Buonanno and Giuliana Giobbi. Springer (2014). Here’s what I sent them.

Father Athanasius Kircher SJ is one of the most intriguing and frustrating characters of 17th century science. Described as “the last man who knew everything,” his work ranged over hieroglyphs, magnetism, sundials, optics, acoustics, music, astronomy, philology, logic, Chinese culture, Roman antiquities… In 1633, as a young Jesuit, he arrived at Roman College where he was to spend most of his career, including organizing a remarkable collection of curiosities that became known as the Museum Kircheriarnum.

Rome in the year 1633 carries another significance in the history of science, of course; that’s the locus of Galileo’s infamous trial. This coincidence forms the connection between the two scientists treated in Buonanno’s book.

Most of this book is dedicated to Kircher, whose story is far less well known than Galileo’s. Kircher makes a fascinating contrast in style with Galileo. While both were shameless self-promoters, Galileo was far more rigorous, focused, and polemical in his science; Kircher’s theme was simply wonder and delight, reporting marvelous machines and novelties like a 17th-century version of Ripley’s Believe It Or Not.

Kircher’s books are a fascinating melange of observations and theory ranging from the outstanding to the absurd, presented without evaluation or comment. Thus, he could argue cogently against the last vestiges of Aristostilean physics and its crystalline spheres, in favor of a new method of philosophy based on observation and experiment; but Kircher could also write on Noah’s Ark – three volumes! – attempting to map out just how Noah was able to fit all of those animals (and their feed) within the dimensions given in the Bible.

Such a mishmash of brilliance and absurdity is also a fair description of Buonanno’s book. It is filled with wonderful anecdotes and illustrations from the lives and times of its main characters, but these are presented haphazardly with no obvious theme and only the most superficial of analysis.

For example, Chapter 4 is dedicated to the fascinating history of “The War of Telescopes in Rome” but it is a story that does not have any obvious relevance to either Kircher or Galileo. Chapter 8, “Hieroglyphs and the Dream of Universal Wisdom”, begins with Kircher at the height of his powers developing his famous museum, and carries this story forward to his last years and the fear that the museum will not survive him; then it jumps some thirty years back in time to Kircher’s youthful work translating Egyptian hieroglyphs, without any common thread connecting the two discussions. Along with the mental whiplash of trying to keep track of the names and personalities from paragraph to paragraph, one is also frustrated with questions raised but unanswered… such as, what ever did happen to Kircher’s museum, and why was it dispersed so soon after his death?

To add to the confusion, the translation into English ranges from the awkward and the misleading, to the absurd.

Some of the word choices are amusing in their inappropriateness. In Chapter 9, we find repeated references to the size of the “radium” (i.e. radius) of the Earth. More alarmingly, Chapter 1 ends with a quotation from Galileo’s famous letter to the Grand Duchess Christina, whom we are informed was “wife of the Grand duke of Tuscany, a well-known bigot.”

In the first case, I think it is safe to assume that Buonanno knows that the Earth is not massively radioactive. The second mistranslation is problematic in several ways, however. “Bigot” is presumably a false-friend translation of the Italian “bigotta” (assuming it is referring to the Duchess, and not her late husband) which can be translated as “sanctimonious, self-righteous, pharisaical.” Even that still seems rather harsh, however; perhaps Buonanno intended a more colloquial translation such as “churchy.” In any event, “bigot” with all its connotations in English is certainly not correct. Furthermore, as we noted, the word order leaves an ambiguity as to the person being referred to as a “bigot.” But this error is compounded by the incorrect inference implied in this description that the husband of the Duchess was still Grand Duke at the time of Galileo’s letter, whereas in fact he had been dead for five years; the Grand Duke who ruled Tuscany at that time (and who had taken on Galileo as his Court Philosopher) was in fact Christina’s youthful son, still in his early 20s.

More problematic than the occasional howler in word choice is the general style that appears to merely insert English words into the original Italian sentence structure. Examples of this can be found in nearly every paragraph. To quote one particularly awful example, the final paragraph on page 89 begins, “This contradicts atmosphere, in which scholars question Nature, and people experience within themselves the contrast between the new science and their faith, whereas obtuse people use both categories, thus hoping to oppose the change required by times, precipitates on 5 March 1616, when the Congregation of the Index publishes a bill in which heliocentrism is declared contrary to the Holy Writ and destroys all hope to compare the different visions of the world without dogmatism.”

These are more than technical problems. The language is so clumsy that the reader is not given any chance to read nuance into the text. What might be read as sarcasm or irony could just as easily be the author’s malapropisms. One is left unsure of just what Buonanno’s attitude is towards either of these scientists; at times I was not sure if Buonanno was guilty of the easy anti-clericalism that often infects histories of science.

And this highlights the weakest aspect of the book, its failure to develop any coherent theme out of the contrast between the scientists. The idea to compare the styles and careers of these two men is brilliant; the questions raised by that comparison are exactly the right issues to help illustrate how science developed during their time. While it’s easy to laugh at Kircher’s plans of Noah’s Ark, the fact that he thought to make a rigorous mathematical analysis of the question is something that marks Kircher as post-Galileo thinker, a 17th century man. He may have believed that his museum had real unicorn horns and mermaids’ tails; but he did insist on exhibiting actual artifacts, not mere reports from ancient texts. And given the flood of new discoveries coming to Europe from the other continents, who was to say that a unicorn was any more unbelievable than, say, a rhinoceros?

Most of Kircher’s attempts at translating Egyptian hieroglyphs are now seen to be far from correct, but his technique in attempting to do this, and the the motivation behind this work as described by Buonanno, are a marvelous mixture of a cosmology in transition. The pre-scientific mindset, living among the ruins of a glorious past, had held that we were the poor descendants of a lost golden age. In such a world view, the more ancient the written text, the closer it was to that lost wisdom of the past. Galileo’s telescope has shaken that assumption by revealing truths never hinted at in ancient books. Kircher’s quest to recover the wisdom of the past reflects both the old belief in a golden age and the new self-confidence that believed such wisdom could indeed be recovered and built upon.

But unfortunately, Buonanno does not develop this or any other overarching theme. Nor, in his haphazard organization of the material, does he do an adequate job of placing these scientists into their political, economic, or philosophical contexts. Certainly Buonanno is aware of this context – reference is made to the rise of the plague at the end of the Thirty Years’ War or the social revolutions of the 1640s. But this history is not presented in an organized way. For example, Buonanno comments on Kircher’s collaboration with the artist Bernini; but we are not even given a context of Bernini’s age or accomplishments at the time of that collaboration.

One particular loss is the inexplicable failure to draw out the contrast between how Galileo and Kircher interacted with their contemporary scientists. Where Galileo insisted on playing a lone hand, seeing all other astronomers as hated rivals, Kircher’s most important role may well have been in the compilation and dissemination of the work of others. In the era before scientific journals, Kircher was one (along with a few others, such as Marin Mersenne and Robert Hooke) to whom the scientists of the era communicated their latest findings. In that regard, Kircher’s collections of oddities could well be seen as being a faithful and uncritical reporter of what he heard.

The frustration I feel with this book, however, arises precisely because at its core Buonanno has found a subject well worth treating, and he has collected a wonderful series of vignettes and anecdotes that I am delighted to have read. Even as I wept over his crimes against the English language and his inexplicable ordering of topics, I found my self thoroughly enjoying myself as I read this book. It was like going for a walk with a lively and well-read raconteur, one whose mind would leap from topic to topic in an ever-surprising, ever-intriguing conversation. Given its disorder (and lack of index) this is not a particularly useful reference book. But it is a book that is a delight to dip in, at random.

And in that sense, it does Kircher proud.