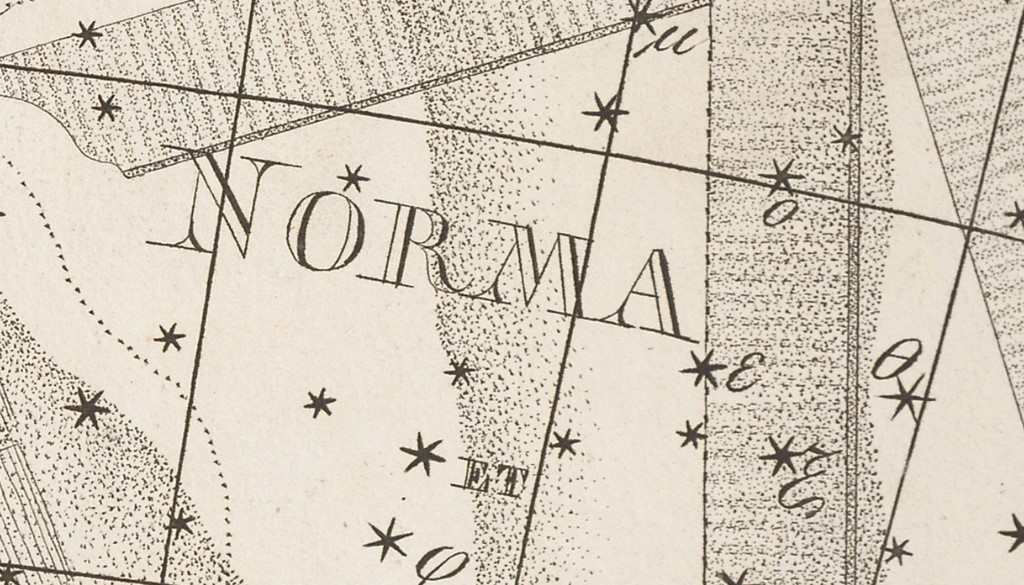 There is a constellation called the Carpenter’s Square.  Well, to be precise, it is called “Norma”.  It is located between Antares and Rigil Kentaurus (alpha Centauri), so it is most visible in the summer, from tropical latitudes southward (the image below shows the view from the region of Mexico City, at around midnight in mid-June).

Why talk about a summer constellation in December?  Because the Year of St. Joseph that was proclaimed by Pope Francis is coming to a close in a few days.  At my church we’ve been singing “behold the faithful and wise servant” after the end of every mass all year long.  And the carpenter square is of course one of the symbols of St. Joseph.

According to the University of St. Joseph (Connecticut, USA), “the carpenter’s square symbolizes Saint Joseph’s occupation and is also a symbol of accuracy and truth”—you know, of getting the measurements right, which of course is central to the business of science.  According to my 1891 Harper’s Latin Dictionary, by Lewis and Short, “norma” in Latin means, in addition to “a square, employed by carpenters, masons, etc. for making right angles”, a “rule, pattern, precept”.  A line that is “normal” to a surface is one that is perpendicular, or square, to that surface.  “Norms” of behavior are “rules”.

The square is one of the constellations invented by the French astronomer Nicolas Louis de Lacaille.  Lacaille was born in 1713.  He studied mathematics and theology, and, putting these together, eventually became Abbé Lacaille, Professor of Astronomy at the Collège de France.  In 1750 he went on a voyage to South Africa to pursue astronomical research, where from 1751 to 1752 he made precision measurements of 9800 southern stars.  He also created a number of new constellations, all of which were named for tools and instruments from the arts and sciences.  Norma was one of these.

Ian Ridpath in his book Star Tales writes that,

On his 1756 planisphere Lacaille called it l’Equerre et la Regle, the Square and Rule, depicting it as a draughtsman’s set-square and ruler, although in the accompanying star catalogue the name was given simply as l’Équerre.

Lacaille placed it next to another of his inventions, the compasses (le Compas, now known as Circinus), and the southern triangle (Triangulum Australe); this latter figure was an earlier invention of the Dutch navigators Keyser and de Houtman which Lacaille visualized as a builder’s level, thereby creating a trio of surveying and building instruments. On the 1763 edition of the planisphere Lacaille Latinized and shortened the name of the constellation to Norma; others, though, preferred the fuller name Norma et Regula, as did Johann Bode on his atlas of 1801.

The illustration of Norma from Chart XV of Bode’s 1801 atlas Uranographia is shown below.  Norma is the sort of constellation that only an astronomer who is cataloging stars would care to invent—someone who says, “we need a name for this unremarkable piece of sky for the catalog”.  The Stellarium sky app has options to display the constellations of many different cultures; according to it, the stars that make up Norma apparently were never part of any culture’s sky lore.  That’s not surprising.  All of the stars in Norma are dim.  The brightest is fourth magnitude, comparable to Alcor in the handle of the Big Dipper.  Sorry, St. Joseph!