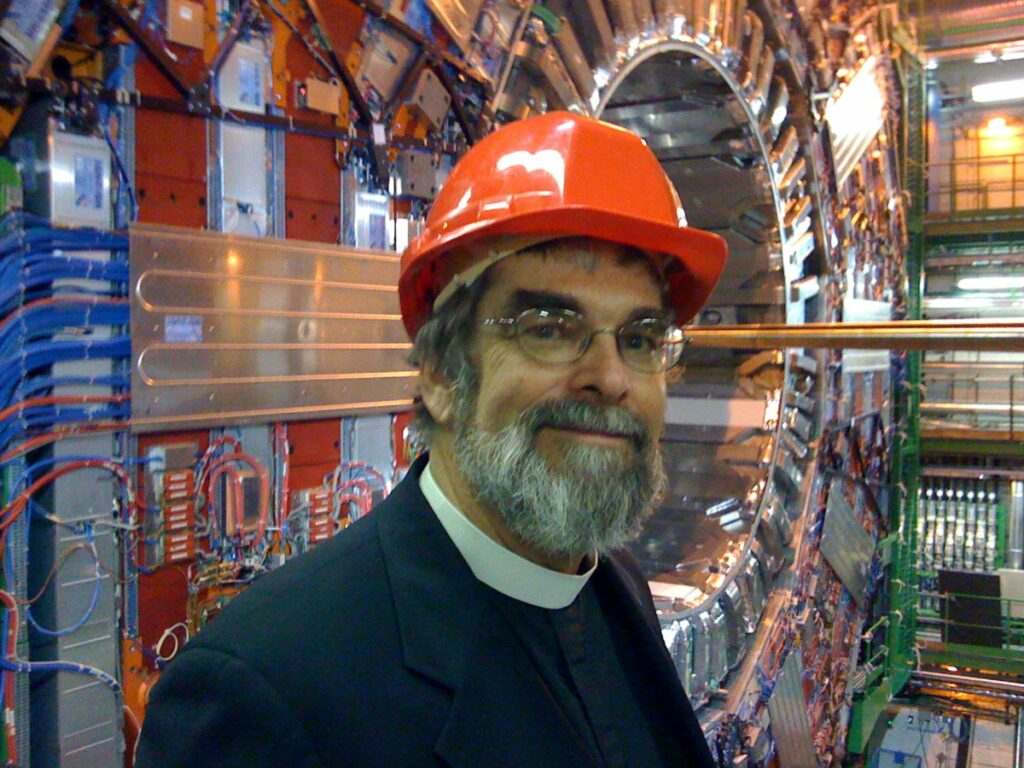 Ten years ago, on 4 July 2012, CERN announced the discovery of the Higgs Boson. Here’s what I wrote for The Tablet, who published this article in July 2012. A version of this article was published here in 2017 under the title “Big Science, Hurrah!”

“How will the discovery of the Higgs Boson impact the Catholic Scientific Community?” asked one panicked email I received last week. “How can the new discovery and our belief be reconciled?” So many misconceptions in one email… where to start?

Emails like this, not to mention all sorts of press inquiries, came to us at the Vatican Observatory following the announcement by CERN that they had detected a “a new particle in the mass region around 126 GeV… the results are preliminary but dramatic… we know it is a boson and it’s the heaviest boson ever found.”

Right away, the internet was filled with instant pundits giving opinions at varying levels of cluefulness. The press, if not the scientists, immediately jumped on the news, calling it the discovery of the Higgs Boson (something that the CERN press release was careful not to do) which they inevitably referred to as “The God Particle.”

The animals in the zoo

What are we afraid of?

But rather than trying to explain in any more detail what a Higgs Boson is (an impossible task in this space) I would actually like to take my fearful emailer’s questions seriously. What does its discovery mean to the Catholic community, scientific or otherwise?

First, about that “God Particle” moniker: the particle itself has nothing to do with God – or at least, nothing more than any other particle of creation does… since every particle, in its own way, demonstrates the beauty and subtlety (and indeed at times the sense of humor) of the Creator.

The God Particle was a book written twenty years ago by the physicist Leon Lederman. Ever since the title was nicked by the journalists, he’s been trying to live it down. From the beginning it was meant only as a metaphor, a way to describe the importance of this particular particle which, if discovered, would cap the Standard Model; a particle which, in its elegance, might reflect the elegance of God; and a particle whose existence, like that of God, its believers have had to take only on faith. In discussing this name, Lederman once joked that it came about because his publisher wouldn’t let him call it “the goddamn particle…”

Scientists do, indeed, speak in metaphors. We have to. Even the word “particle” is a misnomer. A boson or fermion is nothing at all like a tiny speck of stuff that you could see in a microscope. It is an entity that can only be described in terms of the mathematics that it appears to follow; and even the maths are a metaphor for the reality they are trying to describe. People who look for “literal” truth in the Bible would be well advised to remember that materialistic science itself is not meant to be taken “literally.” You can’t do justice to any deep truth, be it love or beauty or subatomic particles or God, with mere human language. You can only invoke a meaning through images that, if well chosen, might shadow the shape of reality in your mind.

Why this lesson is so hard to grasp? Why is it that journalists and non-scientists latch on to the a nickname like the “God particle”? Why do so many people desperately seek to find a religious vindication in the latest incomprehensible advances in science, from the Higgs Boson to Dark Energy to The Big Bang?

I’m glad the public does find it so enthralling. That’s why scientists like me can get paid to do the work that obviously fascinates us, too. Certainly I worry that some people may be expecting science to deliver more than it can promise. Turning researchers into a priesthood does science no favors; after all, the priesthood of priests has suffered its share of anticlerical attacks. But this kind of mind-stretching science does have a role to play in our religious understanding.

Catholic thinkers from Augustine to Aquinas to John Paul II have been at pains to remind us that there are not two different kinds of truth, one for science and another for religion. But there are two kinds of questions. One sort are those that have simple and often quantifiable answers: how many, how big, what happens first, what happens next? Science answers this kind of question. Once these questions are solved, we put them aside and go on to the next set of questions.

The second kind of question, though, are those that we continue to ponder all our lives, even when we already have answers for them… questions about meaning and beauty and love. Rather than answering them, science can provoke us to ask such questions, illuminating them in a new light. When it does that, science enriches our religion and philosophy without pretending to replace it.

The Higgs Boson, if indeed it is discovered (the report from CERN is tantalizing in how it implies there may be more going on here than just checking off the last open square in our chart of predicted subatomic entities) reminds us that reality exists in ways that matter, on a scale and in a manner that we can partially grasp with our mathematics, but which ultimately go beyond our power of imagination.

It’s a beautiful piece of science. It’s an illustration of how we humans can progress in our understanding of these unimaginable realms of reality. And it’s not over yet.

CERN is a classic example of big science: thousands of scientists, engineers, secretaries, cooks, and cleaners, all working together across many continents to pull off a fabulous feat of discovery. In total, 2400 employees; plus 10,000 visiting scientists. No single individual could have done this work.

The accelerator itself crosses the border between Switzerland and France. The very names of the particles are international – Higgs, Bose, Fermi: a Geordie and an Indian and an Italian. It requires a lot of communication to get everyone working together. It’s no accident that the Internet itself was first invented at CERN, to promote this communication.

CERN, like any bureaucracy, has suffered from mistakes, setbacks, even scandals. But it is achieving what it was designed to do. It reminds us why we put up with big science; or big government. Or even a big Church.