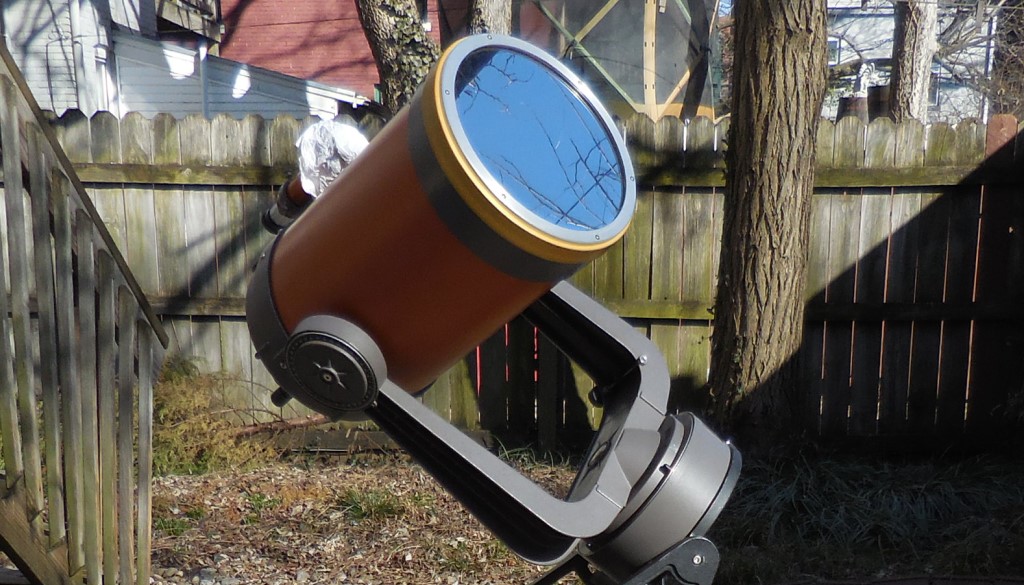 Check out this telescope.  This is a vintage 1970s Celestron C-8 Schmidt-Cassegrain Telescope (SCT).  It was headed to the dumpster, and is now—hopefully—fully operational.

The C-8 had been sitting for a long time (perhaps decades) in a lab at my old college, Jefferson Community & Technical College in Louisville, Kentucky (USA).  I retired from Jefferson last summer, and upon doing so I promptly volunteered to clean up all the physics and electronics labs there.  The lab that the C-8 was in was (is) one of the toughest clean-up jobs of all.

That lab is the oldest physics lab at the college—built in the late 1960s.  If a lab has multiple people teaching in it, and no designated person paid specifically to keep the place in order, the situation in the lab will gradually become worse and worse.  Adjunct faculty in Kentucky community and technical colleges are paid a pittance; economics demands that they not sink hours into cleaning up a lab.  Full-time faculty do not get tenure and promotions by pushing brooms, filling dumpsters, and clearing shelves.  And so, after half a century the situation in that lab was pretty grim, with the regularly used stuff piled in some more-or-less accessible place, and everything else stashed as suggested by the opportunity of the moment (that moment, in some cases, having occurred in 1978, or 1993).

What things looked like prior to cleaning.  See the center two photos?  There are sinks on those counters.  Yes, they are there, buried under the junk.  You might just make out a faucet and soap dish in the center-right photo (arrowed).

I never taught in this lab.  I spent my career teaching at other Jefferson campuses than the one where this lab is located.  So I did not know that it was full of all sorts of cool stuff from decades ago:

Wow, look at these slide carousels full of Voyager images!

I think this high voltage power supply has vacuum tubes in it!

One of those cool things was this C-8.  But, it was a mess.  It was coated in dust (and the dust cover was off the corrector plate).  The finder was screwed up.  The eyepiece was opaque with some sort of white crud.  There was no power cord.  The axis clamps were out of whack.

But I could not bring myself to heave the C-8 into the dumpster cart.  When I was young I would have been happy simply to have had the honor of standing next to a C-8.  Back then, a lady in our astronomy club had an 8-inch reflector, and that was a Big Deal, but no one was blessed enough to have an 8-inch SCT! 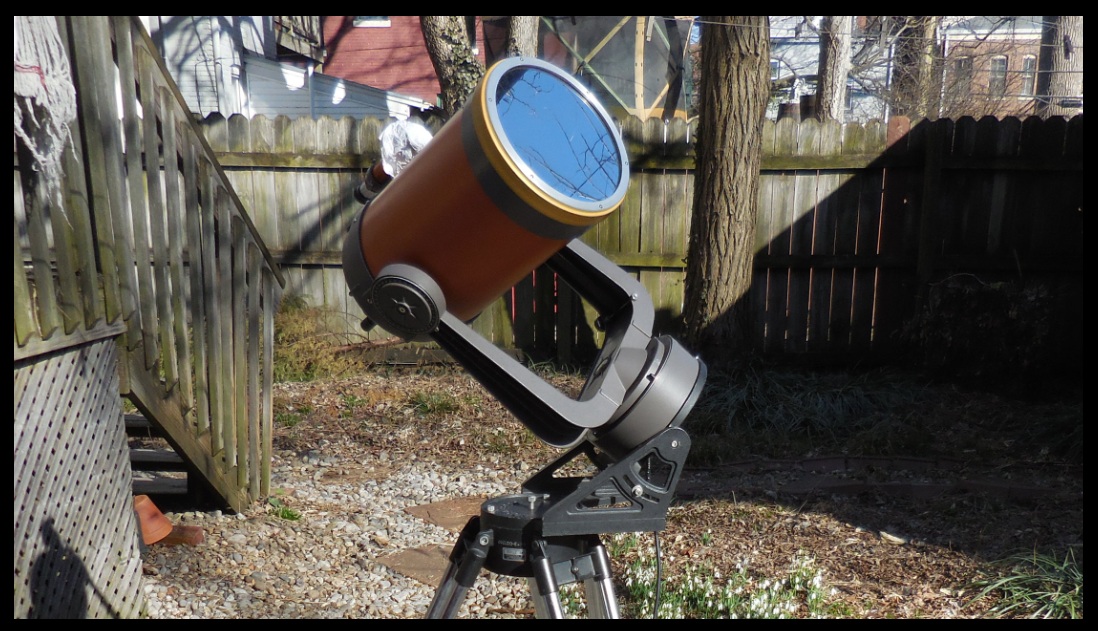 So, I hauled the C-8 home.  And in time, I cleaned it up.  I fixed that which was not working.  I found replacements for stuff that needed replacing.  And now the C-8 is operational!  I’ve used it, and let others see through it, too.

(I even got the crud off that eyepiece.  I had to fully disassemble it.  You are never supposed to do that, but when something is going to the trash otherwise, you take risks.  I have no idea what the crud was.)

The C-8 will go to the college’s observatory for use in public programs.  The “vintage” factor should have appeal.  The C-8’s serial number is 4 6770 6, which according to “Cloudy Nights” means it was manufactured in the fourth quarter of 1976.

This is an interesting telescope.  It is sturdy, light, simple, stable, and its motor tracks well.  Almost nothing on it is plastic.  There are no electronic controls.  The tripod has an interesting backwards-folding design that forms a very rigid base for the scope.  Vibrations are not a problem.  The views are good (although there is some crud on the back of the corrector plate that keeps the scope from performing at its best). 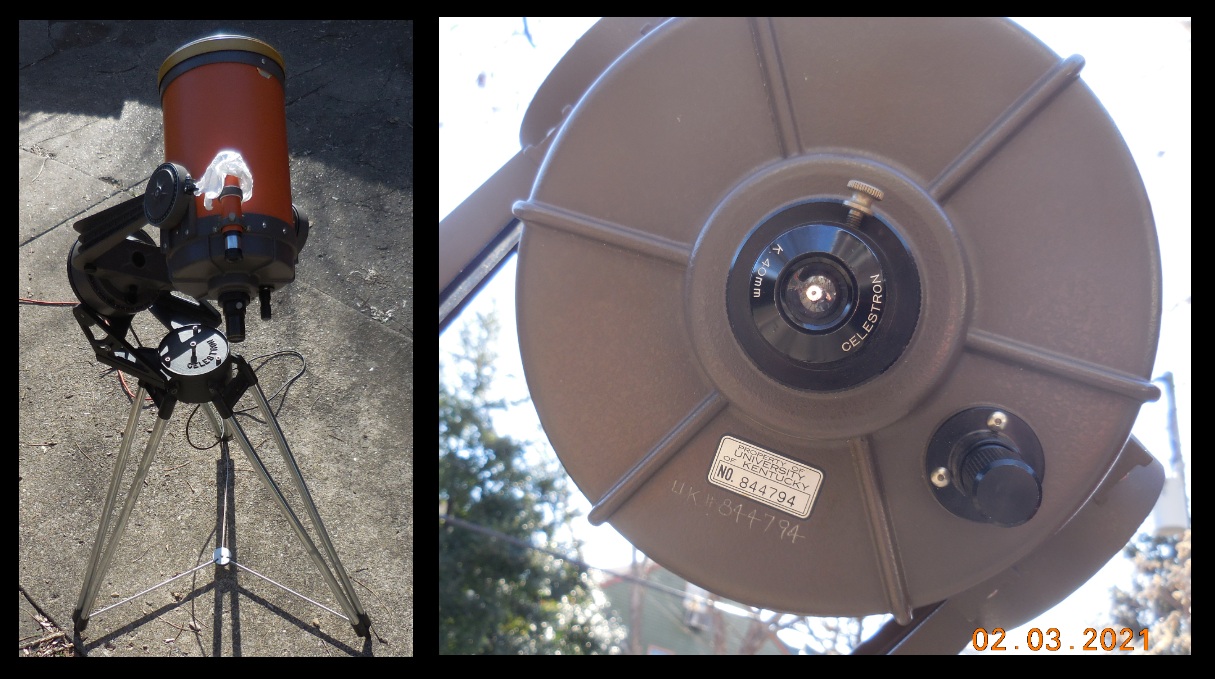 Note the original eyepiece in the image at right.  That is the one that was clouded with crud.  The University of Kentucky serial number is because Jefferson Community & Technical College was originally a University of Kentucky community college—a branch campus of UK.  The community colleges were separated from UK at the turn of the 21st century, but I always remained a UK professor.  Yes, that is a point of pride!  Go Cats! (the real Wildcats, not the Arizona poser kind of cats).

But the C-8 is unrefined.  There are no height adjustments on the tripod.  There is nothing to allow for any levelling on sloped ground.  There is nothing to help get the thing oriented toward north (you just have to move the whole tripod, and that is not a very fine adjustment).  There is no battery to run the motor drive; if you do not have 120 VAC power and a long extension cord then you do not have a drive.  Everything requires an Allen wrench; there are plenty of opportunities to drop stuff into the grass in the dark.  At some time I will likely bust something with those backwards-folding C-8 tripod legs—hopefully it won’t be someone’s teeth.

But this old C-8 is pretty cool.  I am glad I did not send it to the dumpster.  Or, I will be, if it holds up under use.

The dust cover for the corrector plate (left) is the only thing on the C-8 that is obviously plastic.  The solar filter in these pictures is vintage, too.  Back when it was made, they did not use Styrofoam or foam rubber to pack the filter (right)—it is cushioned with some sort of cloth or cloth-like paper.