This column first ran in The Tablet in March 2018

When the news agency of the Italian Bishops’ Conference asked me, as Vatican Observatory director, for a statement on the death of Stephen Hawking, I wrote: “Stephen Hawking… was a scientist of remarkable insight who even more remarkably gave a human face to the work of astronomical cosmology.”

The bishops translated my English into Italian, and issued a press release. That release was, in turn, picked up by American newspapers who turned their Italian back into English. Thus the Washington Post had me saying that Hawking was a “scientist of admirable intuition, who knew even more extraordinarily to give a human face to cosmology and to astronomy.”

It’s close; but it’s not quite what I said.

This story illustrates a fundamental difficulty we always must face when trying to put human language, be it Italian or English or mathematics, to the task of describing the universe. We will always be faced with miscommunications, mistranslations, or simple inadequacies. 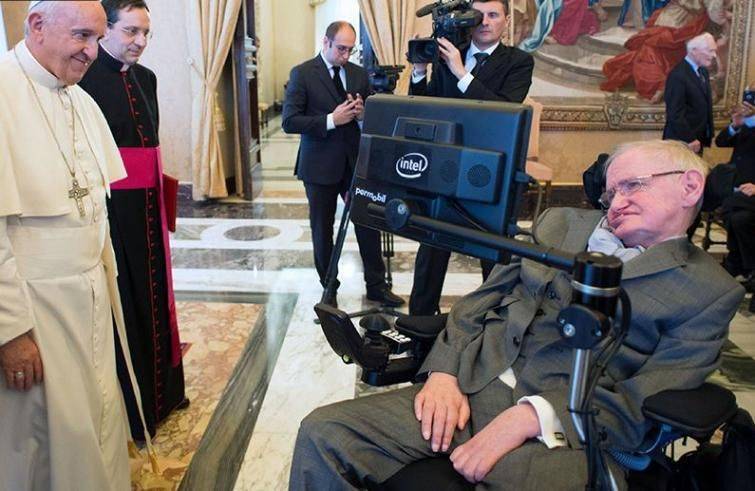 Though I never knew Hawking personally, the Vatican Observatory’s noted cosmologist Fr. Bill Stoeger studied with him at Cambridge in the 1970s and they remained good friends all their lives. Ironically, though they were the same age, Hawking outlived Fr. Stoeger by four years. Of course I was aware of the public persona, including his conscious decision as his disease progressed to market himself as a “genius” to the general public. The success of his books (which it seems everyone bought and no one read) insured that he could support himself as his disease progressed, and gave him a sense of value. But it also fed the mania of the media to deify celebrity science.

Hawking was a good physicist. But he was not Newton or Einstein. His one memorable insight was seeing how black holes could “evaporate” via the quantum uncertainty that would allow an occasional bit to find itself outside the “Schwarzschild radius” and thus free to escape the black hole’s gravity. But Einstein’s Relativity predicted black holes, John Wheeler named them, and Karl Schwarzschild determined their radius. And while Hawking’s theory is convincing, it is still beyond our abilities to test.

Hawking was an inspiration to others with disabilities. Writing on our blog site The Catholic Astronomer, Dr. Brenda Frye recalls a lecture he gave at Berkeley: “dozens of disabled individuals found their way to this auditorium. I recall that Professor Hawking… said, not for everyone to see him as a role model and study mathematics, but rather for each person to find out what one does best and then do that one thing.”

And yet Hawking could also be a very difficult person. He was a sinner. So are we all.

The death of Stephen Hawking [on March 14, 2018] filled the news with plaudits for his science and his remarkable life. He was certainly the most famous scientist of his generation. But most of the eulogies missed that essential part of his story, one that he both suppressed and yet, I suspect, he longed for. He was after all an ordinary human being.